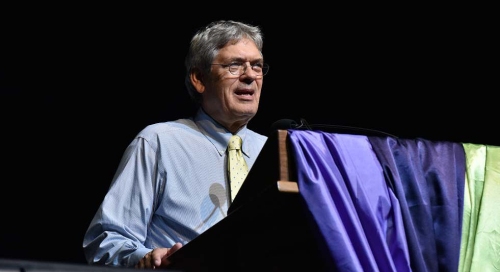 There is a question that I never heard my parents ask: “What can I get out of it?” Max and Dottie Murray had plenty of human foibles to moderate their saintliness, but preoccupation with personal payoff was not among them. Nor did I ever hear my parents express admiration for someone because of what he or she managed to accumulate during life’s journey. The people that were admired in my home were the people that contributed, not those that acquired.

There were times when I questioned the touch of naiveté in my mother’s unquestioning acceptance of pure motives, especially among public servants. She had so internalized the barn story (in Luke 12:16-21) that she really could not comprehend the idea of rewards for generosity. For her, giving was just a way of living. My mother could have written Jack Kennedy’s iconic, inaugural bromide: “Ask not what your country can do for you….”

Part of the Sunday morning ritual of preparing for church always included a question for us kids: “Do you have something for the offering?” If we did not remember or prepare to have something from our own allowance to put in the offering plate, my father would quietly slip us a coin. It was not just the sacrifice but also the habit, the discipline, the ritual that was important.

When it was time for our family to prepare for its (nearly) annual trip to the big Brethren meeting, there was little talk about what we could expect to get out of it. Of course we had fond expectations. For us children, most of those centered on travel, breaking from routine, seeing friends from far off places, and the general pageantry of thousands of people meeting to express their faith. Certainly my parents had similar fond anticipation but they also portrayed a sense of duty.

Annual Conference was as much an act of giving as it was of receiving. Whether or not we were delegates or had another official duty, we were expected to think of our time at Conference as a part of our contribution to the faith community that helped shape our values and our identity. Whether we were lending our voice to a sweet, a cappella rendering of a familiar hymn or giving the white kerchief send-off to traveling missionaries, we understood that our presence, in its own small way, added strength to the whole Body. We understood that without us the Body would be ever so slightly diminished. I think now that this was neither a self-absorbed conceit nor a sentimental ploy but a realistic understanding of how the church works and a spiritual response to what it means to be the Body of Christ.

I am often asked: “What are your hopes for Annual Conference?” One of my fondest hopes is that each person who comes will be aware of the importance of what he or she brings to Conference; that each of us will consider that what we will give in Greensboro will be as significant as what we get.