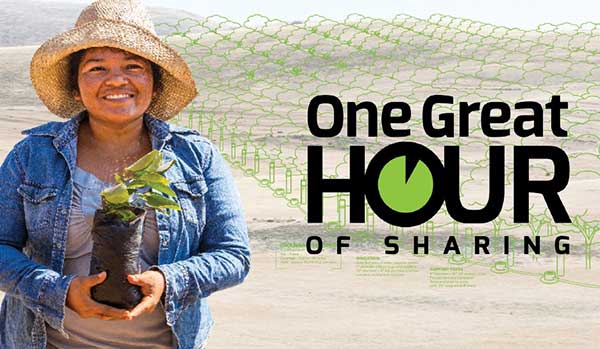 By the Rev. Thea Leticia Racelis

“Now to God be the glory, who by the power at work within us is able to accomplish abundantly far more than all we can ask or imagine” (Ephesians 3:20).

It is easy to feel overwhelmed when we look at all the areas of need in the world. There is hunger, sickness, decay, and injustice in so many communities. It is easy to feel that we are too small and too insignificant to make a difference and believe that nothing we do can help.

But there is hope! Better yet: we are that hope! As the Apostle Paul writes, “by the power at work within us,” God is able to “accomplish abundantly more than we can ask or imagine” (Ephesians 3:20).

Archbishop Desmond Tutu put it succinctly when he wrote, “We are the agents of transformation that God uses to transfigure the world.” We know that we are part of God’s answer to the need in the world! As followers of Jesus, we know that God’s dream for all people is not that we would strive to be separate, caring only for ourselves, but that in community, we would practice love and compassion. When we share our resources, there is enough for us all! We share our resources because, as Brian Peterson writes: “we are not simply filled ‘with’ God’s fullness as something to make us feel satisfied and content, but we are filled for the goal of God’s fullness in and for the world.”

We are all connected, and we derive our identity from God “from whom every family in heaven and on earth derives its name” (Ephesians 3:14b). We are all part of the family of God whether we live in an agricultural community in Nicaragua or in a bustling city in the United States.

Paul’s letter to the Ephesians reminds us that we do not act alone. We act as the church, a gathering of God’s people, still living into Paul’s prayer and being “rooted and established in love” (Ephesians 3:17b). John Stott shares, “Paul likens [the Christians of Ephesus] first to a well-rooted tree, and then to a well-built house. In both cases, the unseen cause of their stability will be the same: love. Love is to be the soil in which their life is to be rooted; love is to be the foundation on which their life is built.”

As Christians, living into this loving legacy, we act out of faith knowing that God is using our contributions in ways that we can’t foresee and multiplying blessings in ways we would never expect. We act knowing that we are part of God’s imagination.

Will you be part of God’s dream for the world? Will you accept the invitation to make a difference and see what God will do with our giving?

We pray that you and your congregation will be inspired to give to One Great Hour of Sharing with hopeful expectation of what God will do. It will surely be more than we could imagine. 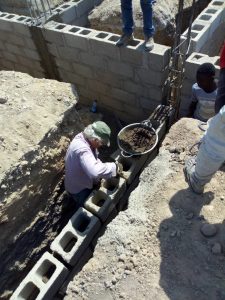 Tim Joseph at the workcamp

It is certainly a profound and life-changing experience to visit Nigeria and work and fellowship with the Nigerian Brethren.  I had previously been part of a work camp in February, 2009, (just months before the emergence of Boko Haram) and my experiences then have been a real touchstone in my life ever since.  I went this time with my wife Wanda, and I gave special attention and thought to changes in Nigeria in the intervening nine years.  I am fully aware that I can only see the surface and maybe one or two layers beneath, and that I carry my own mindset and preconceptions that color everything I see.  So here some highly subjective thoughts:

The Nigerians we worked, played, traveled and worshiped with are for the most part as hospitable, optimistic, fun-filled and humorous as I remembered.  Their faith in the goodness and protection of God is strong and deep.  I believe I saw more sadness in more eyes than I saw nine years ago, which is to be expected from the brutality and losses they have suffered, but their resilience and determination to live happily and trust in God is amazing, to say the least, to this American. 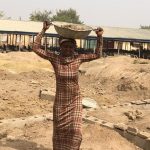 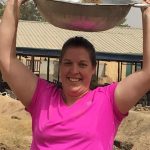 The actual work we American Brethren did in building foundations for that huge church in Michika was negligible, considering the scope of the project and the fact that almost all the work is done by simple muscle and sweat.  But there is no doubt our presence was extremely encouraging, inspiring and soul-filling to the people there, for they told us of their appreciation countless times and in many ways.  Many people told us that our just being there eased their fear.  Folks often commented on the great sacrifice we had made, leaving our comfortable, safe homes and traveling to a place so rough and dangerous.  I didn’t feel that way at all, of course, and felt the deepest gratitude and joy to be so well taken care of, so loved, not to mention just getting to be in Africa!

We listened to a lot of stories; that is probably the most important work we did.  Hair-raising, heartbreaking stories often.  One young man at Michika, Elisha Bitrus Sengere II, told and wrote down for me the story of his escape by motorbike the Sunday morning, 7 September 2014 when the terrorists stormed into Michika shooting and throwing bombs and the people ran to the mountains, to their homes, some to their deaths.  We visited many churches and bible schools which had been destroyed and were in various stages of rebuilding.  There are many widows and orphans.  We stayed at Kulp Bible College, at Kwarhi, which the terrorists had invaded and vandalized, but not destroyed, and we traveled an hour each day to Michika.  On that daily trip we went through nine military checkpoints and crossed two bomb-collapsed bridges.  For all that, life and commerce do seem to go on fairly normally in that region these days.  (But what do I know?) 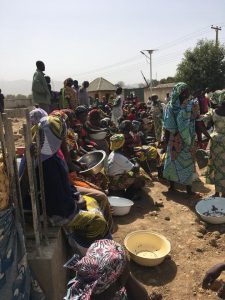 The Nigerian Brethren’s relation/stance toward Muslims is complicated.  The church is remarkably faithful to Jesus’ teaching of loving and forgiving our enemies.  I can’t even imagine Americans being so faithful and obedient.  At the same time, there is a whole lot of bitterness and resentment toward Muslims in Nigerian Brethren I was with.  In many places in Nigeria Christians are second-class citizens.  Nigeria is the only country with roughly equivalent numbers of Muslims and Christians.  They have to get along.  Add to that five hundred different languages and hundreds of different tribes, as well as castes….  It is a rough place to have a nation.  Is it any wonder the church is so vital to our brothers and sisters of the EYN?  Pray for them.  Pray hard.

I had the opportunity to go to Chibok for a short visit, where I never dreamed I would be able to go.  Markus Gamache had some business up there one Saturday and took Sharon Franzen and I along.  I had visited in 2009 and had vivid memories.  The military were not happy that we foreigners were there.  We went to the Bible School to investigate the location for a bore hole they are planning to dig, and we visited a church and a family nearby.  Some huge trees which had provided shade and a gathering place at the Bible School had been cut down by the army as some kind of military precaution.  I know there are much deeper harms that have been done at Chibok, but it was painful to see those dead trunks in the hot sun.  War is the work of the Devil, no doubt about it. 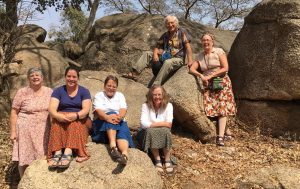 Another day after work we visited Lassa, where again I had thought I would not be able to go.  It was kind of a spur of the moment trip, and we traveled a rough dirt road through forest and bush from Michika to Lassa.  I had spent a couple of days there in 2009 and two boys had adopted me and hung with me the whole time–Siliarnad and Paul.  I had no way of knowing what had happened to them when Boko Haram overran Lassa, but I knew teenage boys would have been prime targets for killing or kidnapping.  We arrived at Lassa EYN #1 church (which was rebuilt by Muslim-dominated Borno State–there’s a story there which I do not know) and there were few people in the church compound, but there was a boy sitting alone in a large courtyard playing a drum.  In conversation with the boy I soon discovered that he is a younger brother of Siliarnad.  Siliarnad was off in Yola taking a college entrance exam and Paul was alive and well in the town.  Some days God just takes a direct hand.

Two days ago, the President signed an Executive Order confirming that he will keep Guantanamo, the U.S. military prison in Cuba, open. In Guantanamo, prisoners are detained without trial and often mistreated psychologically and physically.
The Church of the Brethren is committed to speaking out against torture, which has consistently been a concern with this facility. Detainees are confined indefinitely without a trial, and denied basic legal human rights that should be afforded to all persons. A lack of transparency in the facility compounds the ethical problems, as the public is often not aware of the interrogation techniques and torture performed on their behalf.
The 2010 Church of the Brethren Resolution on Torture says that “torture is a blatant violation of the tenets of our faith. It injects into our character the sense that we are better than others and dehumanizes people. It seeks to break the human spirit. In reality it devastates both the one who is tortured and the one who tortures.”
Jesus makes it clear that the way we interact with others is of utmost importance. In Matthew 25:40, he says that “whatever you did for one of the least of these brothers and sisters of mine, you did for me.” The “least of these” certainly applies to those imprisoned without trial in our military prisons, and our treatment of these prisoners is a far cry from how we would treat Jesus.
The indefinite detention of prisoners by our government in Guantanamo is inconsistent with an ethic of peace and justice. As we seek to live in right relationship with others, we must hold the U.S. government accountable for it’s treatment of detainees. We condemn the decision to keep the Guantanamo Bay facility open, and urge the U.S. government to commit itself to the transparent, ethical treatment of all prisoners.
For more information about how you can get involved in seeking justice, visit the website of our partner, the National Religious Campaign Against Torture.