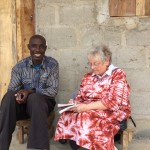 We recently had an opportunity to visit one of the EYN resettlement camps at Luvu Masaka, located near Nigeria’s capital city of Abuja, and collected several different stories about how people ended up there.  All of the people interviewed had fled from the far Northeastern part of the EYN Mission area, located near the Sambisa Forest and Gwoza, the self-proclaimed Capital of Boko Haram’s Islamic State.  The people in this area have endured attack after attack from Boko Haram over the past several years.  And, as this is written in August of 2015, the area is still considered to be unsafe for these Christians to return. Many Christians think they will never be able to return to this area.  The stories are hard to hear, and even harder to imagine, but I’m reporting their stories as told to me. 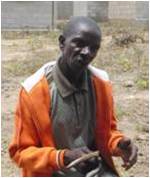 Haram came and burned his house.  He ran one way while his wife and children ran another.  John ran to the Cameroon mountains with other refugees where he stayed for about a year.  Then, Boko Haram found them there, and killed many more people. Eventually, he heard from his wife and learned that she had gone to Autabalfe in Nasarawa State located south and west of Jos, which is right in the center of Nigeria.  Six children are with her.  He traveled to Autabalfe to be with them, but they don’t have a place to live yet.  He came to the camp hoping to find a place to stay.  He is a farmer but he says he is willing to do any kind of work to support his family and will accept any type of accommodation.  He is desperate. 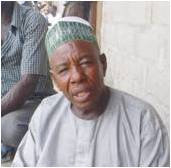 Adamu  – On March 13, 2013, Boko Haram came to Gavva West and burned and looted their church.  Four people were killed.  Then, in April of 2013, Boko Haram came again and burned his son’s house and car.  And, in September and October of 2013, they came and chased everyone away, when they burnt the entire village, killing another 15 people.  Adamu finally fled to the neighboring village of Gavva close to the Cameroon border.  When Boko Haram came to Gavva, they burned two EYN churches and many houses.  This time, when they were chased from Gavva, he fled to Michika.  Then Boko Haram came to Michika and he fled to Maiduguri where he spent about four months while his son supported him.  When he left Maiduguri, he only had 2 trousers and 2 shirts.  He’s now come to the resettlement camp at Masaka looking for a place to stay.  He has seven children and his wife living with him.  He thanks God, and the relief team, for his very survival.  He got transport money from his sons and was able to come to the camp at Masaka, where he is looking for a new place to settle.

Zakariya  was not at home in Gavva when the Boko Haram attacks came.  He 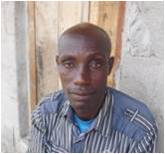 had been studying in Maiduguri, where he graduated with a Higher National Diploma in Banking and Finance.  He related the story as told to him by his relatives.  Boko Haram came to Gavva East in Nov of 2013 and destroyed 18 houses and killed three people.  Then they left and many people stayed.  In Sept of 2014, Boko Haram came back.  Anyone that ran away was shot. They killed all the men they could find and burned the houses of all the Christians, looting personal property by taking TVs, clothes, cars, cows, and stores of food. People were forced to convert to Islam or die.

Those who were able to get away ran to the mountains.  Older people who couldn’t climb were killed.  They weren’t killing women, but forced them to convert and enslaved them.  Some people escaped to Cameroon.  Some who escaped to the mountains are still there, where many have died of hunger and some can’t get out.  As Zakariya was telling his story, one man who spent many months in the mountains volunteered the information that he and another man repeatedly came down into Gavva in the night to search for food left behind so they could carry it back up to the mountains to be shared around.  This is how they are surviving.

Zakaria’s mother initially refused to come out of the village but has now gone to live in the mountains.  Another person reported to him that she is alive, but he hasn’t heard from her in many months.  If they have a fire to cook something, the smoke from the fire will reveal their presence and get them killed.  He doesn’t know if she is surviving.

Musa  – On June 13, 2014 many people were going to church when Boko Haram came with their machine guns and attacked.  Three people were killed before the people of Attagara chased the Boko Haram away, killing some of the Boko Haram in the process.  The Christians were so angry that they burned Muslim homes in Attagara and chased them away.  Before long, though, Boko Haram came back and chased all the Christians away, killing 84 people in the process.  All the survivors fled.  The Boko Haram looted goods and burned all the houses where Christians lived.  Musa fled into Cameroon.  After some time and a difficult journey, he has now come to the camp in Masaka.  He has been assigned a home and has a job working in the Gurku camp.  He has a wife and 4 children.  He has committed everything unto God and is enduring.

The day we were at Masaka, we witnessed a distribution of food and supplies to the residents of the camp.  All these supplies were provided by the EYN Relief Distribution Team who, receive funding from CAM (Christian Aid Ministries) and the COB Crisis Relief Fund.  Families in this camp feel very fortunate to have a small home that they can move into.  Those homes were built with funds from the COB Crisis Relief Fund, and some land around the houses was also purchased.  It requires hard work to till, plant and harvest but there’s still time to plant some things and get them harvested before the rains end in October.  Our prayer this day was that God will bless the new homes that are being established, and provide these people with a bountiful harvest. 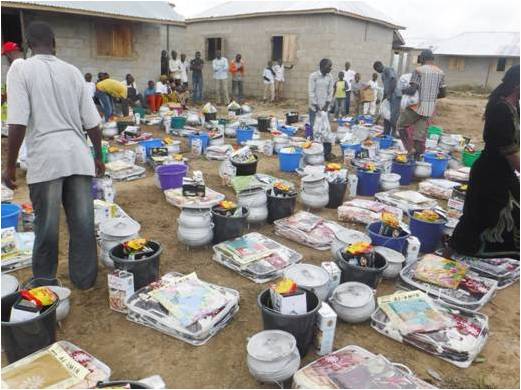 Distribution of household items at Masaka