Highlights include: 18 homes rebuilt, school fees for 33 children, food for 427 households, business grants for 56 women, and a security tips workshop for 92 (see pictures below)

In September the EYN Disaster Ministry continued its recovery efforts. 18 family homes were rebuilt in a village off the beaten path. Extra workers were employed to carry the roofing materials across the river. Those whose homes were repaired expressed their thanks; they thought no one would ever be able to reach them with this much needed help after their village was burned by the Boko Haram.

School is not free for children in Nigeria and sometimes the family cannot afford the school fees. As a new school year started, Disaster Ministry was able to pay the fees for 33 orphans.

Food distributions are still taking place across the region. Help was given at three camps for Internally Displaced Persons in Maiduguri. In Garkida region, a distribution for 132 families helped Christians and Muslims.

A workshop was held at the Headquarters for District leaders, staff, and heads of church programs. The workshop for 92 people dealt with how to handle ongoing security issues and gave tips and best practices during this difficult time.

In a subsistence farming culture, families try to grow enough food to feed themselves and then sell the excess for other necessities. In addition to farming, many people have a small business on the side but start-up capital is always hard to come by especially for widows. The Women’s Ministry coordinated Disaster Ministry funds to train 56 women in tailoring and business practices. At their graduation from the training, each woman was provided with $150 start-up capital to put their new skills to work.

Please continue to pray for Nigeria and the ongoing Disaster work.

On June 23rd Fulani Herdsmen in the Jos Plateau area attacked numerous villages. Officials report 238 persons killed in 17 villages. The attackers also burnt and vandalized the villages, destroying homes, churches and properties. The people cannot return home. Some reports indicated that roads to outlaying villages are blocked by the Fulani. Many families are displaced and living with relatives or in temporary camps. 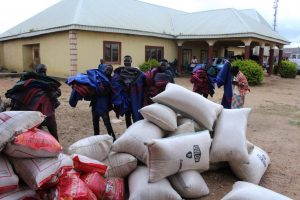 Ekklesiyar Yan’uwa a Nigeria’s (EYN) main area is in Northeast Nigeria but it has a presence in the Jos Plateau area where the June attacks occurred. The Middle Belt of Nigeria has many Christians from numerous denominations. When EYN’s Disaster Response Ministry got word of the numerous displaced persons in Bokkos LGA, they were ready to help. The Disaster team organized a large distribution for 1639 persons in the Bokkos area. 9000 pounds of corn, 7,700 pounds of rice along with beans, gari, palm oil, spices and blankets were distributed. 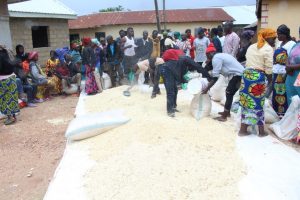 Recipients of the food distribution were so grateful. They noted that EYN’s methods were different than other relief/government agencies; they actually stayed to distribute the materials, gather data and listen to people’s stories. The devastation of these villages will have long reaching consequences for all those involved. The Disaster team is well aware of this because of their work in the Northeast.

Despite all the work the Disaster team has going on as they help in the Northeast, they came to the aid of their fellow Nigerians in a time of desperate need . Well Done Nigerian Brethren! 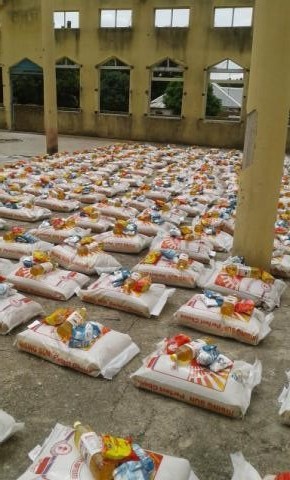 Food Distribution inside the destroyed church at Gulak.

The months from July until late October are called the “Lean Period” because people’s food from last year’s harvest is almost gone and the new crop is not yet ready. The Boko Haram insurgency has compounded this problem with a decreased ability to even plant crops. Statistics from United Nations Office for the Coordination of Humanitarian Affairs (Nigeria) states that 8.5 Million people in the area are still in need of humanitarian assistance.

The EYN Disaster Ministry Response team has been very active in the last few months with eight food distributions. A lot of planning and effort goes into providing an organized distribution to around 300 families at a time. Food must be bought in the local market, loaded on trucks and taken to the distribution point (often a church). The district leaders must have made a list of needy families in their area and contacted them to convene for the distribution. There is a lot of waiting as the process unfolds. There is the visual reminder of the insecurity in the area and the devastation that has affected their lives when they receive the food in a destroyed church. There is happiness in receiving the much needed food. Please continue to pray for the people of Northeast Nigeria. 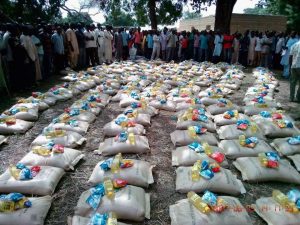 Organization is the key. 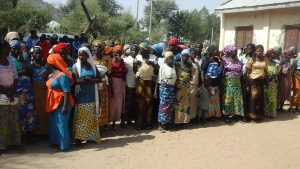 Waiting for the food distribution. 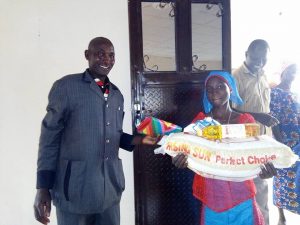 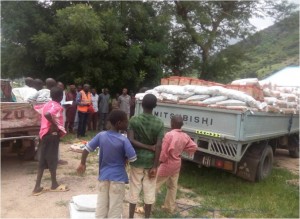 FOOD DISTRIBUTION  A team of four staff of the EYN Disaster Relief Ministry took food supplies to the Futu District. The team was led by the EYN Director Relief, Rev. Yuguda Z. Mdurwa. Other staff were Acting Coordinator, Rev. Joshua B. Mainu, Mr. Aniya Simon, Accountant and the Driver, Mr. John Haha.  The truck could not reach the initially planned center for distribution because of a stream on the way to the village; but food items were collected by representatives of the Local Churches. District Officials were also present  as the Local Church representatives collected the items for their congregations. 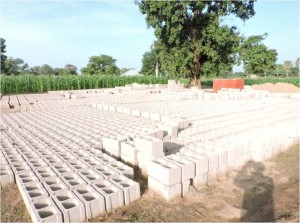 Blocks ready to build the wall at CSS

WALL FOR COMPREHENSIVE SECONDARY SCHOOL  Blocks are being made to continue the wall around the EYN Secondary School. The wall will aid in security for the over 250 students. 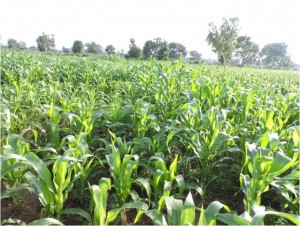 SEEDS & FERTILIZER  In June,  corn (maize) seeds and fertilizer were given to over 2000 families. The corn is growing and now bean seeds have been purchased and are being distributed to 3000 families. The beans are planted in August and grow under the corn. We pray for a bountiful harvest.

August Fellowship Group from the USA visits Favored Sister’s School – While spending two weeks walking along side our brothers and sisters in Nigeria, the latest fellowship group visited one of our sponsored schools. This school is the full time home to 120 orphans. 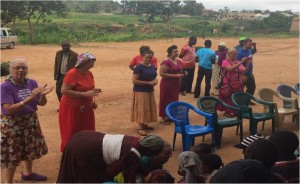 Singing and praising God with the children 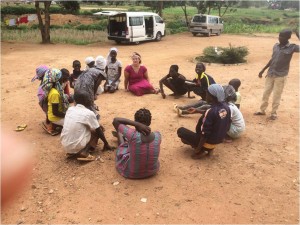 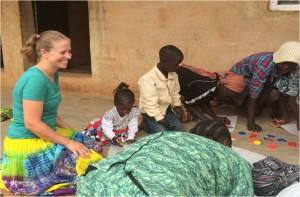 Coloring and engaging with the children 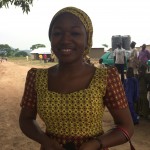 Thank you for your support of the Nigeria Crisis Response. (Consolidated from a report by Rhoda)

Ekklesiayar Yan’uwa a Nigeria (EYN) Relief Team has been very busy with food distributions.  In the last two weeks, your donations have provided food for 988 families (about 6000 individuals). Food was distributed to three remote districts that had never received help because they were still in dangerous and unsafe areas. 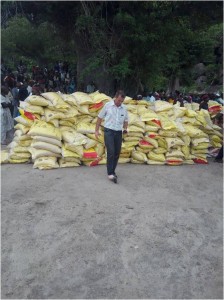 Mussa District: Most of the people had relocated back home but they were attacked for the second and third time by the Boko Haram. The community was burned and many were killed. They have taken refuge in Wamdeo (a neighboring village). EYN relief team provided about 277 households with rice, detergent, cooking oil, Maggi (cooking flavoring), soap, salt and personal care items.

Dille District: The people of Dille have also returned home.  The EYN Disaster Management Team assisted in this relocation of 654 families. Dille was attacked a few days before the distribution. However, soldiers around the community were been able to restore order and the people are living well and going about their normal activities. The Disaster team along with Glenn and Marcus from Christian Aid Ministries went under Nigerian Military escort to ensure a safe distribution. 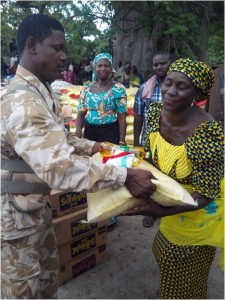 Ado Kasa: Ado Kasa is another community in Nassarawa state where IDPs  have relocated and are staying.  It is not a camp, but a community where people stay in rented houses. 57 households have found refuge at Ado Kasa; they have a church with a Pastor assigned to them from the EYN Headquarters. They face many health challenges especially the pregnant women who have to travel to another town for medical services.  When the people of  Ado Kasa received the bags of corn, they danced and were happy and they said it was more than anything they have ever received.