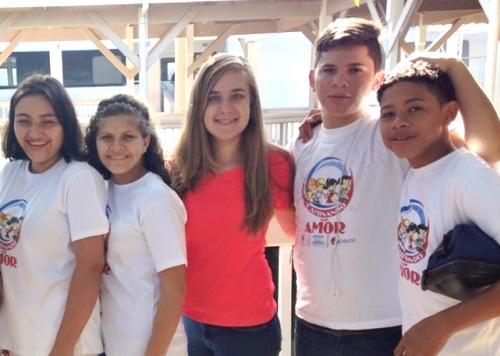 Throughout the last two years as I lived at the Hogar de Niños Emanuel (Emanuel Children’s Home) in San Pedro Sula, Honduras, I learned more about what it means to be part of the family of God. When I arrived I didn’t know what to expect. I knew there were about 80 children being cared for by employees, but I knew nothing about these children, their backgrounds, or what they were like.

After two months, I learned the name of each child, and that many were siblings. I was sometimes surprised to find out who was a sibling to whom. In time though, I learned what it meant to be a member of the family that is Hogar de Niños Emanuel.

There is no doubt that on that plot of land surrounded by the city, there is a family of over 100 members—a family that is one of the most welcoming families I have ever met.

After living there for 8 months, 12 new children were brought to the home. It was an exciting day and everyone was curious about the newcomers. For me, these new children seemed out of place. Even after the first day, I felt as though they just didn’t quite belong. What I learned, however, was that in this giant family, everyone belongs. For this family there was no such thing as being a stranger. I saw every child welcome each of the new children to the table for lunch, proudly give newcomers tours of the home, and they all became brothers and sisters right before my eyes.

This experience was incredible, and it taught me a bit about my own prejudices and struggles with accepting change. This is not to say that everyone in the family of Hogar Emanuel always gets along, or even that they like each other all the time, and there are always “black sheep” in a family. However, all are loved as siblings, and everyone knows that they belong in this family.

I was privileged to be a member of that family. A glimpse of the Kingdom of Heaven shines through those children. The way in which they live is an example for all of us. We are all called to invite one another to the table, regardless of someone’s background, and to become brothers and sisters in God’s great big family.