Working for peace in Washington often feels like a losing battle, but perhaps the problem is that we often view the work of peace through a combative lens. Whether the issue is gun violence, drones, or any other issue of militarism, we often talk of “fighting back” against these issues and eventually building up enough support to “defeat our opposition”. But what if this paradigm is limiting our imagination and holding us back from working for and embodying Christ’s transformative kingdom?

I reflected on this tension after attending a conference held at the United States Institute of Peace that covered the Humanitarian Impact of Nuclear Weapons. There were speakers from Jewish, Christian, Muslim, and Buddhist backgrounds, and their testimonies and stories of the religious community’s advocacy were very compelling and in stark contrast to the message of perhaps the most anticipated speaker at the event, Anita Friedt, who works for the State Department on US Nuclear Policy.

Mrs. Friedt’s speech was a fairly typical DC speech that was short on concrete ideas or promises and chock full of vague legalese that boiled down to an appreciation of the work the religious community does to make the world safe from nuclear weapons, while simultaneously patting us on the head to let us know that the political reality was much more complicated. She even tried to reassure us that the United States would never consider using these weapons except in the most extreme circumstances, but neglected to enlighten us as to what those circumstances might look like.

My friend and colleague, Rev. Michael Neuroth summed up many of our reactions to Mrs. Friedt’s remarks by ending his subsequent presentation with a quote from longtime peace activist Rev. William Sloane Coffin who once said, “We are beginning to resemble extinct dinosaurs who suffered from too much armor and too little brain”.

We all approvingly applauded the succinct remark, but if we are not careful, the Church’s political advocacy and activism can become confined by this same armor employed by Mrs. Friedt. When the real life problems of our communities and world become “issues” we talk about abstractly, we can speak and act on them divorced from their context and the people actually affected. To do this betrays not only the people affected but also our vocation as the Church.

When we engage in this manner, we’ve allowed our own armor to shroud and influence our vision to the point that we cannot even begin to imagine a world that is wildly different and more restorative than the reality we currently inhabit. Scholar and theologian Walter Brueggemann speaks about this tension at length in his book the Prophetic Imagination. In our line of work, we often like to talk about hope and peace in our world, but Brueggemann rightly reminds us that these words mean nothing out of their context:

“Hope expressed only in the present tense will no doubt be co-opted by the managers of this age…Therefore the symbols of hope cannot be general and universal but must be those that have been known concretely in this particular history…The memory of this community begins in God’s promissory address to the darkness of chaos, to barren Sarah, and to oppressed Egyptian slaves. The speech of God is first about an alternative future. (The Prophetic Imagination, pg. 64)”

We are not a people without a history and we are not a people without a God. We know and believe that the status quo is not the best we can hope for because we have this unique story of God’s freedom and liberation working in the world. The same spirit in the “Cloud by Day/Fire by Night” that guided the Israelites out of the wilderness continues to pull us forward today into new possibilities of liberation and reconciliation. 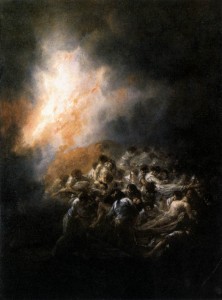 To speak of such things in our society makes us sound strange and unfamiliar, but speaking about them also gives us a clinging hope that feels unwarranted and yet incredibly necessary

Especially necessary when we’re confronted with inexplicable madness like the kidnapping of the Nigerian girls in Chibok. To respond with disembodied calls for peace and hope in Nigeria from a cozy office in Washington feels inadequate at best and totally disingenuous at worst. But when we ground our work in communion and solidarity with our Nigerian sisters and brothers, we can once again plug back into our story and remind ourselves of who we are and whose we are.

Only when grounded in this context can we faithfully speak an energizing word of hope, advocate for a just policy, or pray a prayer for peace. Only when we tap into the imagination and creativity of the Spirit can we begin to embody the reality of God that is here waiting to be shared and lived into.

This is our hope as an office. To witness to the story we’ve been given and grafted into by Christ. To recognize the areas of our country and world where this witness and promise of God’s alternative reality can make a difference, and pray that our work is not in vain.

May we learn to strip off the armor that limits our hope and shrouds our vision. And may we remember that we are clothed in Christ, the one who renews our mind and spirit to be courageous disciples who have no need of any armor but the Spirit of the Lord that goes with us.

2 thoughts on “Too Much Armor, Too Little Brain: The Risks of Political Advocacy & the Hope Our God Offers”