Perception of reality is often so subjective and inconsistent that it can subvert being present with others. That in conversation or from moment to moment there is a sense of surreal space and time, where situations seem distant, foreign or magnified; where waking consciousness seems more sleep-like. A friend recently spoke so eloquently of these dream-states it made me realize their rarity and that I’d been feeling them most frequently in my life during transitions.

I spent the last three weeks in one of those otherworldly states, in extended moments of fantastic and absurd loving reality at Brethren Volunteer Service orientation. 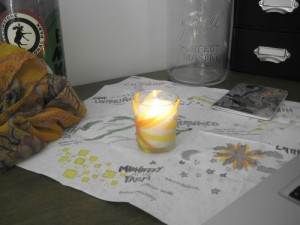 Our group of uncommonly kind individuals opened up to each other relatively fast. We shared deep insecurities, hard pasts, and current joys so fiercely that we cultivated a strong sense of trust and connection. And some vocalized a feeling of being part of a magic bubble or alternative reality made of communal strength and safety.

Our last weekend we stayed at Harrisburg First Church of the Brethren and volunteered with the Brethren Housing Association. For me, and others I think, those few days gave a vivid example of what the Church of the Brethren is about. Although there are a small number of congregants, there is an enormous, humble partnership being built with that community; where structural impact can be seen in many small but persistent ways. On Sunday morning Pastor Belita spoke of a multifaceted faith in God that is planted in grace and personal relationships in order to serve others. In Harrisburg and later, I fell in love with those combined Brethren ideals: living in peaceful simple community, serving others together.

Those values provided a framework of thought and action that was a central part of the mystical-community-reality of orientation. In that space I was hyper-sensitive to past feelings, present thoughts, and future expectations, and immersed in thinking about how to use my particular passions and gifts to serve.

Domestic volunteers from our unit moved to their placement cities and started work this week. Going out into the world where Brethren ideals are not the norm or structure of thought and where those expectations or intentions are not necessarily clear, is daunting. The task seems infinitely lonely and substantially more difficult without intentional community, where a winking smile, compassionate hug and true support were easy to find. It was a magical, surreal place because trust, acceptance and love were abundant.

I leave for Hinche, Haiti in early November and I want to stay in that dream-state of mindful reality during my service. Where moments may seem subjective, raw or strange but they’re hyper-real and CLEARER because I’ll be questioning my faith journey, vocation, power, paradigms of thought, and intentions; and actively working to make meaningful connections with those around me. I am SO thrilled for these two years of Brethren Volunteer Service because I get to work through the model of loving kindness and pragmatic solidarity, spreading and emanating that energy I found at orientation of cosmic unconditional love.