In June, the Disaster Response Ministry of EYN was busy. 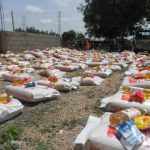 They delivered food to 400 families in some of the hardest hit districts. A pastor in the area shared, “Last week, EYN headquarters gave us fertilizer and seed which we distributed to our members, today they brought us food items, this gives us joy! Truly, our main problem here is that we are prevented from farming, so no food and people are suffering.” 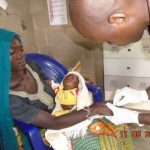 After being rescued, a family held captive for several years was relocated to one of our newly built villages. The family consists of a mother and four children (ages 17, 8, 6, and 4 months.)

In addition, medical help was brought to a camp in Maiduguri where there are over 500 children under the age of 5. 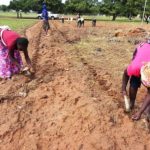 Soybeans were planted as part of the special project designed to produce income along the value chain. 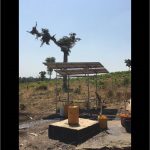 Solar panels were installed at Yola camp providing free water for them.

Please continue to pray for the EYN Disaster Ministry as it helps its people in many ways! 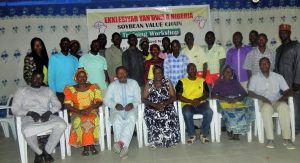 EYN Church of the Brethren in Nigeria’s Agricultural Department embarked on a Soya Beans Chain Training Workshop. The three day workshop was planned to train 32 people from different communities, reported Rev. James T. Mamza, Director of Integrated Community Based Development Program (ICBDP) The workshop trained trainers who will go back to their farming communities to stepdown the knowledge to others. Although the workshop was designed for 32 people only 18  were able to attend; about 50% of the participants were women.

Three Facilitators: Mr. Kefas John, Mr. Daniel Y. Zafi and Mrs. Salamatu J. S. Billi were engaged to teach on soya beans as a crop, Soya beans production, use of inoculant in legumes, field measurement, and marketing soya beans. Other topics discussed include the use of agrochemicals and their side effects. Such teaching is coming to the farming communities who now embracing the use of agrochemicals to reduce farming cost.

This is an area that produces different crops such as Maize, Groundnuts, Beans, and Millet.  I asked  Rev. Mamza why they were emphasizing soya beans?  He replied, “Soya beans is referred to as a Golden crop because it has so many benefits:  it is easy to farm,  it improves soil nutrients in terms of nitrogen and fixation of soil, it destroy pests and suppresses weeds, and it has about 46% protein content to improve nutrition in the human body.”

One of the workshop participants from Chibok, Sister Gladys Mallum, commented that the training was an interesting one. Her concern is people’s acceptance to grab what she called “privilege to maximize farm produce and profit”. By embracing soya beans, she learned that people can fight poverty in their communities.

This is the first of a series of workshops sponsored by CoB and EYN; they will continue in other zones.