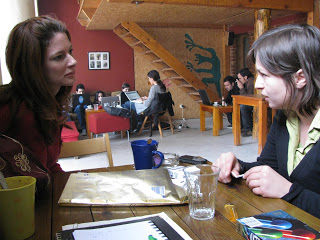 I spent three years and three months (2007-2010) as a BVS volunteer in OKC Abrasevic in Mostar, Bosnia and Herzegovina. I am still discovering all that those three years meant to me, but it is no exaggeration to say that it changed my life.

If I’m being completely honest, sometimes I freak out about the fact that I spent three years not earning/saving any money, or at the very least interning at some international organization which would look good on my resume. I spent a frantic year+ after BVS interning, working and not getting paid, job hunting, etc. During that time, Abrasevic, with its tiny budget, paid me TWICE! I was moved to tears by their solidarity.

But really, I would NEVER take it back. This is who I am. This is how I become who I want to be.

In Abrasevic, the most important thing is to show up and to be present. To talk to people. To make jokes. People are an end in themselves. When Arma stopped being a member of the management team, he spent even more time at Abrasevic than he had before (he had already been there ALL the TIME)—but now he was in the café talking to people, rather than up in his office working. (Nedzad, a longtime volunteer, took on his tasks.) Tina said, when we discussed it, “what’s important is being here; that’s more important than what you do here.”

[[I’m tearing up again thinking about all of them and longing to jump into a car right this minute and visit them!]]

Everyone in Abrasevic has their own artistic dream. Even the waiters are all DJs or musicians or doing street performances or graffiti. People are so supportive of dedication to artistic dreams. We’re always going to the concerts of Mostar bands to hear the same songs and going to the book promotions of Mostar (Abrasevic) poets. I also had a poem published in an Abrasevic literary journal (Kolaps) and showed my videos in the main hall.

One of the main things that I learned in Abrasevic is how important PLACES are for cities. It’s like “a room of one’s own” for urban spaces. It’s essential for Mostar to have an Abrasevic. It’s essential for every city to have neutral urban spaces that encourage people to come together. Like Italo Calvino’s book “Invisible Cities” (which I studied in-depth in a video journalism course at Abrasevic), where Marco Polo tells Kublai Khan the stories of a hundred cities, only to reveal that “all cities are Venice”; now to me, “all cities are Mostar, and must contain an Abrasevic”. When I move to new places, I am always looking for an “Abrasevic”. Of course I can never find another Abrasevic, as it is irreplaceable and unique. But in my life I combine the elements which made Abras so dear to me (solidarity, creativity, espresso) to try to live an Abrasevicy life.

There’s nothing like putting a camera in the hands of a young person. So exciting to see what they come up with. I have to do this again! My life will not be complete unless I can make videos and help young people to make videos! About Roma, skaters, beautiful ramshackle monuments, artists, poets, musicians and activists.

I learned to film and edit video footage.

I also got some experience in grant writing.

I learned about challenges in project design and implementation.

I was so inspired.

I learned about the impact of political conflict on daily life.

I was filled with hope.

– Katie Hampton, BVSer at Abrasevic from October 2007 to December 2010 (currently blogging at www.pilgrimography.com)