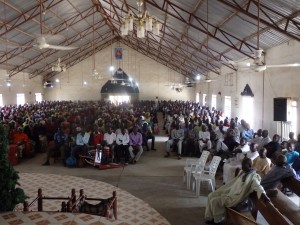 Congregation at EYN church in Biu where distribution took place.

Three Crisis Team members traveled to Biu on a Saturday at the end of February to complete a relief distribution. One day earlier it had appeared as though the process might fall through. Vehicle plans were not coming together and finances seemed to be held up even though approval for the funds had taken place a couple weeks earlier.

Our driver picked me up at eight Saturday morning. One of the two DCC secretaries from Biu was traveling with the Team. We stopped to pick up the other two team members as we drove out of Jos. There had been some question whether it was safe for me, a very visible white person, to travel into this region that had experienced Boko Haram attacks several places along the route.

The road deteriorated as we traveled through three states before reaching Borno State. The last two hours were slow because of heavily potholed road surface. There were regular security check points and occasional vigilante road blocks to supplement government patrols. Around Gombe and as we neared Biu there were increasing signs of the Boko Haram suicide bombings and fire attacks against check point sites, police stations, a hospital and a gas station close to an intersection with another security checkpoint.

When we arrived at the EYN LCC #1 Biu compound most of the supplies were already on site, delivered by a local EYN businessman the Team had called the evening before. We still did not have definite numbers for the EYN displaced families or individuals. There were some outdated pages recording IDPs but the numbers we started hearing from the two DCC secretaries were much higher than we had figured because of recent attacks on EYN communities outside of BIU.

We asked congregations during their worship at the six nearby churches to announce our plans for a 1PM relief distribution. All of these churches were hosting IDPs in the churches or with families. When the one o’clock time arrived the church building was packed with people and others were outside.

We had decided the night before to ask for just one representative from each family to attend the distribution and had decided that we only might have enough supplies for one item per family – a big bag of rice, a larger bag of maize or a box containing packages of noodles. We also had boxes of soap and we intended to give two bars to each family. To make the process smoother we made tickets, color coded and numbered for the total supply of the three items.

With the crowds of people before us Sunday afternoon we considered providing one item for every two families. We were worried that the distribution could deteriorate quickly. Then three ideas surfaced in rapid succession. 1) We would prioritize displaced pastors. 2) Widows would also receive priority. 3) We would start handing out tickets (each family representative picked a ticket from a bag), starting with people ages sixty to seventy and keep moving down a decade until all tickets were gone. That ticket indicated which item they would receive and the order in which they could collect the item.

It meant some expectant persons would not receive one of the three food items but it would be the younger persons who could more easily find jobs in the city to provide food. At the start there was a mass push toward the supplies but with local helpers we were able to make clear that the distribution would start with the order of numbers from inside the church.  Inside the church was also much cooler than the hot sun out in the courtyard.

Even with the kinks in the process and a long careful explanation to make the process clear at the beginning over one thousand people received supplies within three hours. One serendipitous event was deciding to not hand out soap to each family. This meant that there was sufficient soap to give three bars to even the individuals who had not received a ticket and others who were waiting hopefully in the courtyard outside the church.