On Friday, May 18th, the Haitian Church of the Brethren in Miami, Florida marched down the streets of Miami to call for justice in U.S. immigration policy. I had the opportunity to represent the Office of Peacebuilding and Policy at the march, standing in solidarity with the Haitian Brethren who organized the march. 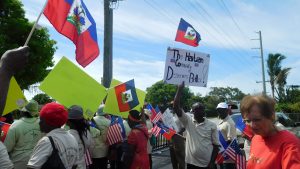 Marchers gathering in front of the Haitian Church of the Brethren Photo: Tori Bateman

A crowd of about 50 people started from the Eglise Des Freres Haitiens in North Miami, marching down a busy street with a police escort. Out of the five days I was in the city, this was the only morning without intense rain- an anomaly we appreciated while marching! The songs of the marchers were punctuated by honks from supportive passerby, and marchers waved both Haitian and American flags. The march ended in front of the Miami U.S. Citizenship and Immigration Services building, where the marchers gathered on the sidewalk to sing and call for just immigration policies. 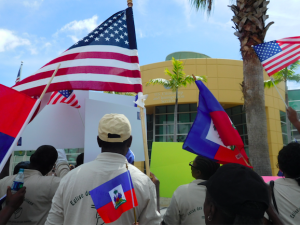 The march’s goal was to support those impacted by Temporary Protected Status (TPS) and Deferred Action for Childhood Arrivals (DACA). TPS is a status given to those from countries experiencing violent conflict, natural disaster, or other extreme situation. Some TPS recipients have been in the country for decades, and have built families, homes and businesses here. Because of the administration’s decision to terminate TPS designations for many countries, community members who had previously been given TPS are now at risk of losing their residency. They have no legal pathway to citizenship because of the nature of the TPS policy. Current bills that would rectify this include the American Promise Act (in the House) and the SECURE Act (in the Senate).

To share these legislative solutions with the marchers, our office led an advocacy training on the evening of the march. During the training, I heard from each of the attendees why they care about immigration issues, and shared our office’s work and resources with them. At the end of the session, participants signed petitions that I will drop off at their Senators’ and Representative’s offices in Washington, DC. 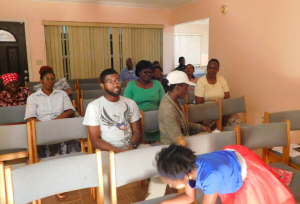 I am grateful for the leadership of the Eglise Des Freres Haitiens church on this important justice issue. The church’s willingness to publicly witness for peace and justice in U.S immigration policy is inspiring, and I can’t wait to see where their advocacy efforts take them in the future. Whether they write letters-to-the-editor, visit a local congressional office, or even meet with their representative in Washington, DC, it is important that Brethren voices like theirs are heard in the context of U.S. policy making.