(A report from the EYN Disaster Ministry)

In the last two weeks Boko Haram has intensified their activities in  BORNO State. On Saturday, 28 farmers were killed at KALLE village near Molai along Damboa Road, Maiduguri. That night, two villages in Konduga were burnt down and many were killed. On Thursday, October 18th, Hauwa, the midwife working with RED cross that was kidnapped in RANN, was murdered. In addition a lot of killings are taking place around Dagu and Midlu. At the moment, KADUNA State is under 24 hour curfew because of Religious crisis between Christian and Muslim youth. At Kasuwan Magani, more than 58 people were killed and many houses were burnt down. The country really needs prayer as confusion and political interest are hitting hard. We can say that boko haram and the religious crisis is far from coming to an end. The Government and the Military are not giving the world the true picture of our country. 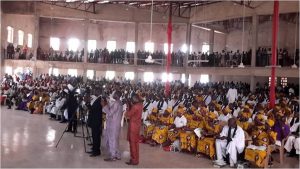 Finally, many people in the EYN area are living in a fear of the  unknown. We will continue to trust in the Lord and his saving grace.
Thank you for your prayers for Nigeria and its people.

2 thoughts on “Pray for Nigeria and the EYN Church”