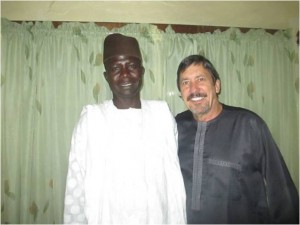 Rev. Yohanna just after he arrived in Jos from Maiduguri

By Carl and Roxane Hill, co-directors of the Nigeria Crisis Response currently in Nigeria

Maiduguri is the Capitol city of Borno State located in northeast Nigeria. It has many distinctions. One is that it is credited as the birthplace of the Islamist insurgent group, Boko Haram. It is the largest city in all of northeast Nigeria with a population of over 2 million. During the violence that has been gripping this part of Nigeria many people have sought refuge in this heavily fortified city, swelling the population by some 50 to 100 thousand. The marketplace in Maiduguri has been closed for some weeks to protect its citizens from suicide bombings.

We met Reverend Yohanna when we were teaching at EYN’s Kulp Bible College. He was not only a lecturer there but served as the campus chaplain. His children were all well versed in English and found us to be welcoming to them and people they could talk to. We really enjoyed this family. However, last December the Chaplain (as we called him) was transferred to become the DCC Secretary of Maiduguri. Besides being a very dangerous assignment the temperatures can get as high as 115 degrees.

As Boko Haram violence escalated throughout 2014 Maiduguri became a bastion of safety for Christians and moderate Muslims. The military also decided that Maiduguri would be protected and additional forces were stationed there. The offensive conducted by the Boko Haram surrounded Maiduguri and became an important target for the terrorists to capture. Fighting rages all around this city in the desert. But it has held out against the radical Islamist sect. As supplies were brought into the city Rev. Yohanna served as the Chairman of the Distribution Committee and provided relief materials for over 50,000 people. He organized peaceful distributions and was one of the only ones to keep accurate records. Based on his documentation the government was able to gauge the amount of supplies to be delivered.

Rev. Yohanna told us that it was a big job to be responsible for so many needy people. He said not all were grateful but most of the people praised God for his fair and honest work. “I really saw the hand of God in this work.”

2 thoughts on “Stories from Nigeria: An Island in the Desert”