Written by Rhoda (secretary for the Nigeria Disaster Team)

Abel was a staff member of EYN Headquarters. He worked in Mubi before the Boko haram attacked that community. In November he was assigned a new position as Medical Officer with the Relief Team. He has a 14 year old daughter named Sarah. In October she was at school with other children when the attack in Mubi started. She was kidnapped with other children and kept in Mubi under the supervision of the Boko Haram people.

Sarah was injured as a result of bombings by the Nigerian Air force on the buildings occupied by Boko Haram and the kidnapped children. Many children lost their lives while Sarah was wounded in the leg. According to Sarah, she was attended by Doctors and her leg was amputated from the knee down without any form of pain relief. She said she was well taken care of by the Boko Haram. It is believed that the Doctors and other workers serving Boko Haram are citizens kidnapped either in their homes or on the roads.

However, Abel was devastated and distraught. He had come to Jos with all the staff of EYN headquarters but he couldn’t think of anything or concentrate on anything because of his missing daughter. His wife was so sick and heartbroken, the situation was very pathetic. The church kept praying for God to strengthen Abel and at least show him a sign that his daughter was dead or alive. I was so concerned because of how Abel looked at our Relief team meetings. In December, Abel received a call that his daughter has been rescued and was in Cameroun with other children. What an unbelievable relief to Abel.

Sarah was brought to Jos and received all the necessary medical attention. The team visited Abel at home with his wife and Sarah. I broke down in tears when I saw Sarah and I am hoping the Boko Haram did not molested her sexually, because she is young and very beautiful.

Abel has accepted the state of his daughter in good faith and is strengthened by the help of EYN and Church of the Brethren.  He was assisted with money from the relief funds to be able to take his daughter to a big hospital where she could get very good medical care. She is fast recovering and hoping to go back to school by next year.  “I want her to continue with her education” said Abel. They are also hoping Sarah will be fitted with an artificial limb. 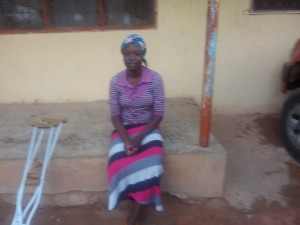 One thought on “Abel’s Daughter – A success story”