“The glory of gardening: hands in the dirt, head in the sun, heart with nature. To nurture a garden is to feed not just on the body, but the soul.” –Alfred Austin

Through the spring Going to the Garden webinar series, we have explored how to start community gardens and how environmental degradation affects conflicts. Join us for this final webinar of the series as we discuss the hidden benefits of community gardens including spiritual wellness, relationship building, and trauma healing.

Gardening is about more than plants and the hopeful harvest of fruits and vegetables that they promise. Gardens provide a space to bring people from all walks of life together, while also facilitating emotional healing and spiritual growth.

To register for this webinar, please visit this link. Any questions can be directed to kfurrow@brethren.org.

Laura Stone is a theologian and church musician who has most recently been studying at Boston University.  She will soon move back to Indiana, where she grew up, to be a hospital chaplain.  Laura has worked at Gould Farm, a working farm and therapeutic community for adults with mental illnesses, and at Waltham Fields Community Farms, a Boston CSA with an emphasis on urban food access, and through these (and through eating delicious local CSA produce!) has developed a keen interest in the practice and spiritual discipline of gardening and local food.

Tom Benevento gives leadership to New Community Project’s Undoing Global Warming campaign based out of their Spring Village Ecology Center in Harrisonburg VA. Tom brings the expertise of a degree in Sustainable Systems, along with years of practical experience in the US and Central America. 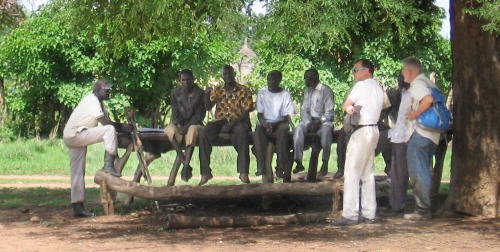 A reflection by Becky Rhodes

While women were out cultivating the fields, village leaders sat on benches under the large shade tree in the center of Lohila in South Sudan. The 500-year-old village, often isolated during the rainy season, has never had a school for their children or a church building for worship. In November 2014, villagers identified these buildings as their great need—an opportunity for a better future following the prolonged violence.

The community of Lohila is a longstanding partner of the Church of the Brethren’s Global Mission and Service program. The success of this partnership to construct the school and church depends on mutual investment and commitment.

On a recent visit, which included members of the Mission Advisory Committee, a spokesman of the village shared plans for building the foundations and walls for the church and school. Roger Schrock, a former missionary in Sudan and the co-leader of our group, applauded the inclusion of women on the village’s building committee. Athanasus Ungang, the Church of the Brethren staff member in Torit, provided an update on supplies en route from Kenya and introduced our group.

As the leaders spoke, the number gathered under the tree began to grow. Women and children gradually approached and began listening to the conversation from the periphery. Then an unexpected yet powerful voice rose from the group. A tall, statuesque woman holding a baby stepped out of the crowd. “Others have come here with promises, but they never came back,” she said. “Your coming to us today is God coming to us. As God parted the water for Moses, God has parted the grass [since South Sudan is land locked] to lead you here. Your presence blesses us, and God is blessing you.”

History tells us the biblical story has influenced great leaders. In his Gettysburg Address, Abraham Lincoln referenced Psalm 90:10 and God as Creator. Dr. Martin Luther King’s “I have a dream” speech reached its highest point with echoes of the prophet Isaiah: “I have a dream that one day every valley shall be exalted, every hill and mountain shall be made low… and the glory of the Lord shall be revealed, and all flesh shall see it together.” Great leaders reframe people’s lives in the biblical context.

I experienced an immediate and deep connection with this woman as she spoke our shared language of the Bible. She talked about the same Moses I know and love: the imperfect servant leader who cared for his people. There were many leaders in Lohila that day, but the most powerful voice belonged to the woman holding the baby. She is a great leader. Her words invoked our shared belief and trust in God. She reframed our lives, our relationship, and our work in the context of the biblical story. God is with us! And God with us is a solid foundation on which to build. 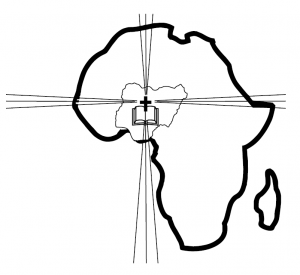 Though the fig tree does not bud
and there are no grapes on the vines,
though the olive crop fails
and the fields produce no food,
though there are no sheep in the pen
and no cattle in the stalls,
yet I will rejoice in the Lord,
I will be joyful in God my Savior.

The tragedy that many Nigerians have lived through would have crushed most of us but like the above passage in Habakkuk, they continue to praise their Lord and Savior, Jesus Christ. 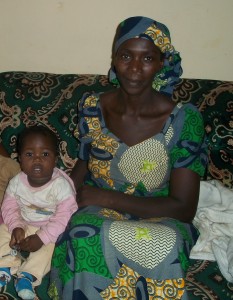 One-year-old “Hope” crawled around on the floor of the reception area at the EYN Headquarters Annex in Jos.  She had a quick smile and inquisitive face.  Every time she headed toward the door to the outside steps, her mother, Naomi, got up and caught her just in time.  Many EYN staff members enjoyed playing around with Hope on their way through the room.

Naomi had worked as a secretary to the Director of Education for EYN, at the former headquarters near Mubi. She and her daughters, Blessing (18) and Hope (1) fled on October 29, 2014, when Boko Haram attacked there, and they found their way to Jos. Now they live in Jos and she works at the  EYN headquarters annex.

Behind her welcoming smile, her face showed her deep pain as she told about her husband, Bello Philip Mwada, a member of the Nigerian Police Force, and her three sons, Moses, Emmanuel, and Haruna, who had been killed by Boko Haram fighters. “My husband, was a man of God,” Naomi said, but he was targeted because several times he found out that militant fighters were coming to a particular community, and he warned the residents to flee.

Blessing will soon be finishing secondary school, and hopes to be able to go to a university, but does not know how she will do that financially.  Naomi, who now works at the headquarters and has the full care of her daughters, doesn’t expect she will return to  Mubi, but will try to resettle in Jos. In spite of her losses and grief, she expressed her gratitude for the EYN community which has helped her during these difficult times, and to God who gives her strength.

Let us continue to lift up in prayer our brothers and sisters in Nigeria.