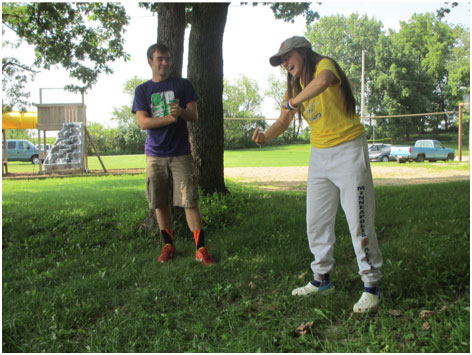 Space. While the boundaries of Camp Pine Lake didn’t stretch far or wide, we fell in love with the large grassy field that it centered around. It gave the camp and its campers a feeling of refreshing openness and a space to be free. Standing from the back porch of the dining hall or the deck upstairs, one could look out over the expanse and see boys and girls cabins, the outdoor chapel, and far away fields. Looking closer, we could observe and remember fond memories of what occurred in this lush grass – playing new games with the spunky summer staff, soaking our feet in the dew each morning while traipsing to Morning Watch, holding hands in a closing circle filled with genuine affirmations and plentiful hugs. The transparency was inviting.

Throughout the week, we explored, used, and created open space beyond the physical. It would not have been possible without the exceptional group of campers at Camp Pine Lake, who immediately accepted all members of their family and vowed to look out for one another. Campers who had spent the previous week at NYC together and campers who were there for the first time interacted and bonded alike. I felt especially welcomed as a YPTTer, as I was constantly being asked questions about the team’s work and my views of peace. I even got myself a stylish hair wrap from Trevor, who selflessly offered his time and supplies all week to wrap anyone’s hair who asked. It was also invigorating to see the campers consistently give their full attention and energy to all activities, despite frequent complaints about being tired from all the late nights and early mornings. It was apparent that these youth highly value camp and the community it creates, and so the affirming space that defined our week was created almost entirely by them.

But, we like to think that maybe we had a part in some of this space, too. We were excited to finally be back with a senior high camp, so we aimed to provide space for deeper discussions during the sessions that we led. During our Just Peace activity, where small groups pick a “hot topic” sort of issue that interests them, two separate groups chose to discuss LGBTQ rights. We found this coincidence to be encouraging, as the youth (and counselors too) yearned to make change and create spaces of equality and acceptance for this oppressed population. Another highlight came when campers used conflicts that had actually occurred throughout the camp week during their skit demonstrations of how to use interpersonal conflict resolution strategies. It was clear that they truly wanted to put these skills to use. A unique part of our week came with the discussion surrounding Human Body Image on Wednesday, which Chris will discuss further.

As our week showed us many examples of the importance of space, we are called to look at where space needs to be created and utilized in our own lives. We can use our physical space creatively, just like the campers and staff who set up a makeshift slip-n-slide on a hot day. We can make space in our homes to be hospitable, just as the summer staff opened their doors to Christy and I when we realized at quite a late hour that we were locked out of our bedroom for the night. We can create space for open conversation with friends and strangers alike, just as the campers welcomed all into their family and built up their relationships together. And as we do all of these things, we can sit on the deck and enjoy the beautiful open spaces that God has already provided, from lush meadows to the loving arms of a friend. 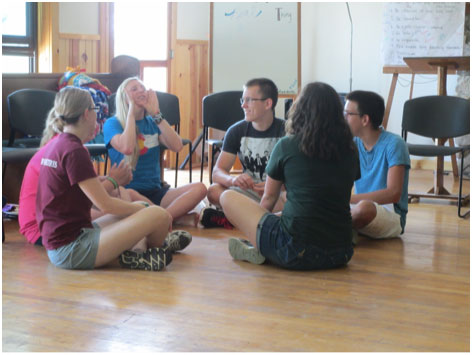 Camp Pine Lake was, for me, just another wonderful example of a loving community that I’ve seen this summer. It was clear from as soon as we started our journey with them back from NYC on the bus that these kids cared about each other. They were totally willing to talk to us and get to know us. I had an especially great time on our canoe trip we took during the week. I had some really good conversation with the two guys I was teamed up with. We spent the first part of the trip canoeing as hard as we could, passing other canoes and barreling down the river. But, the later part of the trip was spent drifting down the river playing 20 questions. During this time we connected over various issues that the three of us all face in our lives, and were able to give each other our various perspectives and advice on these issues. I greatly appreciated their willingness to open up and share about themselves with the group. That canoe trip will definitely stick with me.

The youth at CPL were some of the most inclusive, fun campers we’ve been with this entire summer. Despite the shortened week of camp, the bonds of community created there were exceptional. We were asked as a team to emcee the talent show on the final night. This request thrilled us because it gave us the opportunity to be ridiculously silly as well as witness the variety of talent in the group. As the talent show got on its way, I was touched by how receptive the group was of each individual and how comfortable kids were to share. A girl who hadn’t said more than two words in front of the group all week got up and belted out one of her favorite rock songs. Another pair of campers reenacted the “we are siamese if you please” song from Lady and the Tramp. One hilarious camper even shared a Youtube video of her dancing with a blanket on her head and knocking over a large glass lamp. This got the whole camp rolling around laughing for an extended amount of time :). Meanwhile, the YP double T did improv skits between each act to introduce the next one using locations, actions, and characters that the campers wrote on slips of paper. I may or may not have acted as a shoe that Jake then pooped in. Needless to say, the nonjudgmental environment was key to the community built this week. I am so glad we were warmly welcomed in such a tight-knit camp environment!

When one is working at several different locales, one must adapt to the varying demands of these locations. During the planning of Camp Pine Lake a mysterious acronym “HBI” appeared before us on the schedule. As we were told that this meant Human Body Image, an activity I had seen popped into my head. I quickly told the staff that we would like to lead an activity tackling this topic and this was the first time the members of the team had heard of an activity we would like to do. Entitled “Misrepresentation”, members of the team were to cast a negative light on activities they engaged in or to stereotype themselves. The activities chosen, though were to be positive for ourselves, but could be cast in a negative light. For example, I said that I was manipulative and intentionally put others in uncomfortable situations. This related to the fact that I was a wrestler and in wrestling one must control their opponent. Each member for the team talked about different aspects of themselves that were meaningful to them but could be perceived negatively. For the presentation of activity, we read one another’s and allowed them to guess which personality we read matched up with which member of the peace team. The campers struggled with determining who was who, but the message was that we and they are more. We are all more than the stereotypes, labels, and (hash)tags that people pile on us. Shelley is not the money hoarding college student, but someone who is looking to invest in her future. Jake is not the self invested power lifter, but someone striving for inner peace and bettering himself. Christy is not the ditzy politician concerned with power, but is a serious person looking at the issues of the world and attempting to come up with solutions. Camp Pine Lake was more than just a camp. It was a community of acceptance and love. Each member looked out for one another and made sure the others felt welcome. Camp Pine Lake is more than just a place for a lot of people.