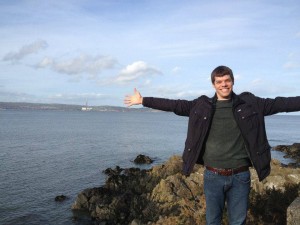 In the days before BVS orientation, I was an absolute wreck.  I had spent two months of the summer trying to figure out where I wanted to go for a placement.  My top three were in Kansas, Missouri, and Ohio.  Just enough change from what I was used to but not too much.  I didn’t want to take too big of a risk and find myself someplace that I didn’t feel reasonably comfortable…

And then I received a phone call from one of the BVS staff asking if I would be interested in going to Northern Ireland.  A spot had opened up at a placement in Belfast, and it was similar to the work that I had listed in my application.  I told her I would keep it in mind, but at that time, I honestly thought there’s no way I was going to volunteer abroad.  And that’s when it started.  A quick phone call turned into a passing thought and then a bit of research and finally full blown chaos in my head.  Before I knew it, I was fully considering going to N. Ireland as an option, and that was killing me because it didn’t fit the plan I had going into the year.

If you know me well, you’ll know just how huge that was for me.  There was too much risk.  Too much change.  Too much unknown.  I…I don’t like those things. At all. Seriously.  For me to even consider volunteering in another country is a testament to how much I had grown in the past year, and that growth came from two places.  First of all, it came from my girlfriend at the time. We had countless talks about the future and our goals for the coming years, and these talks often ended with me becoming upset because she didn’t really have a plan, something which I couldn’t really understand.  How can you go about life without planning out your next step?  She helped me realize (although I wasn’t aware of this realization until later) that taking a step of faith into the unknown can bring fantastic things.

The second piece of the puzzle was a two-word phrase: Let go. My family has a fairly new tradition at Christmas time of picking a word or two that you would like to work on for the coming year. For example, two years ago I chose the word initiative. For this year, my phrase was “Letting go.” Letting go of control.  Letting go of my plans.  Letting go and letting God.  I admit it. I have control issues, and that’s why I needed to make this my challenge for the year.

It all came down to my placement decision. Should I stay, or should I go? My head said stay, but a whisper was saying, “Go for it!”  I had reached my lowest point and was about to toss in the towel.  Instead, I finally handed the reins over to God, and that’s when He said, “It’s about time! Now see what I can do.” Within the next couple of days, at least four separate and unrelated situations that made me certain that God was calling me to go to N. Ireland.  The most notable sign was from a book. I found a book in the BVS library entitled Here I am: Now what on Earth should I be doing? by Quentin Schultze. This was exactly my thought at the time. So I started reading, and on the very first page, it said we are called to be care-takers, not career-seekers. The relevance of this was perfectly clear to me. I had been trying to find a project that would provide me with experience that matched my career goals – career-seeking. The Quaker Cottage position was a child care worker – care-taker. Thanks for the clear advice, God! It’s funny to me now because I went through so much mental turmoil over that decision.

Now I’m sitting in a house on the side of a mountain on a rainy night in west Belfast.  I took a risk and completely left my comfort zone.  I let go of my own plans and chose to trust God.  I don’t know why I’m here or what my purpose is except that God wanted me here, but whatever the reason is, it’s okay with me. Good things are in motion.