As part of the Take 10/Tell 10 Group from the Elizabethtown Church of the Brethren visiting Nigeria in January 2016, Julie Heisey was graciously given the opportunity to interview Safina Doma, EYN Director of Education, and listen to
her story.

Education in government schools, particularly in Nigeria’s northeastern states, is of poor quality due to corruption, crumbling infrastructure and lack of teacher training. As a result, parents banding together had been sending their children to
schools operated by EYN which at least was able to provide Christian education
not allowed in public schools. Dr. Safiya has become Director of Education at a
time when the Boko-Haram insurgency, opposed to both Christian and Muslim
education, is placing great pressure on 45 EYN schools. Dr. Safiya expressed
“deep pain in my heart and tears” when she visits schools like the one at the
Stephanos Camp for Internally Displaced Persons where 100 children have only
one trained volunteer teacher. 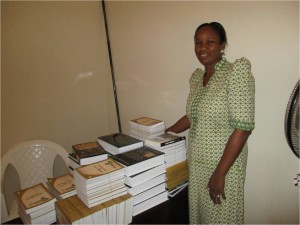 Dr. Safiya has been visiting as many schools as she can, gathering materials that were left behind after Boko-Haram attacks and encouraging school staff who
have not received salaries in the last year. This has taken great courage. In June 2015, Dr. Safiya started out toward Yola with a car and driver visiting EYN
headquarters and many schools. In Mubi the head of the school had lost her husband and Safiya prayed with her in her home. At the EYN Comprehensive (secondary) School she asked students to write an essay on how Boko-Haram has affected their education. In an attempt to reach Chibok her car was stopped from proceeding, but that didn’t stop Safiya. Telling her driver to stay with the car for his own safety, Safiya said, “I bought a box of water and started walking, wondering what I would say if I encountered any terrorists.” Upon arriving at Chibok she found that the school staff had not seen anyone from EYN for one year. They were greatly encouraged by her presence.

As past coordinator of Women Theologians, Dr. Sfiya helped to organize the
workshop on trauma healing and vocational training in Yola in November 2015.
The women were encouraged to forgive their attackers, to reach out to others, and share what they have. Safina has also provided support and encouragement to a colleague who lost her husband and three children in an attack. Her own wedding, planned for last fall, was relocated because of an attack which “scattered all my plans”, but it went on in a safer location. She has received support and encouragement from her new husband, a
retired pastor and former collegue at ECWA seminary.

In the midst of all the suffering and hardship, Safina sees God’s spirit working.
She quoted the words to a song about “blessings of God coming down like
raindrops to those who love God.” Among those blessings she includes:

• opportunities to reflect on the meaning of life, (one’s place in the world, why
God has allowed this suffering and the challenge of unanswered prayers.)
• God has helped many people to escape.
• God has provided “what we need. If God doesn’t provide it, we don’t need
it.”
• Although attacked, Kulp Bible College and EYN headquarters were not
burned and some things were able to be salvaged.
• Unexpected help came from the Church of the Brethren in America inspired
by God. Although the millions of nira that have been contributed by
Americans are important, they are not as important as the people who have
come. EYN will be stronger because of the “fellowship of the feet.”

The next challenges Dr. Safiya sees are praying for the insurgents and telling the
world about how the girl-child, made in the image of God, is affected by rape and
becoming sex slaves. She asked what will become of the resulting babies these
girls will have? How can they, with already lowered status, help their children?
How can we prevent this from becoming an ongoing multi-generational tragedy?
Dr. Safiya has written an article about the The Girl Child: Bobo-Haram’s New
Weapon of War. She has plans to publish a book on the subject in two years.
We have listened to the deep caring, dedication, faith and courage in Safiya’s
story. As she has received inspiration from the presence of the Take 10/Tell 10
Group in Nigeria, her story and the stories of many Nigerian Brethren like her are
bringing inspiration and renewed faith to the church in America.