By Peggy Gish (Volunteer in Nigeria) 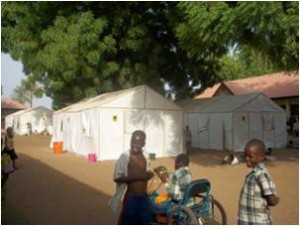 I had been taken to pieces of land being developed into a settlement of small houses for the Nigerian people displaced by the violence of Boko Haram, and a camp of newly constructed buildings where families will start moving into in three weeks. Both sites were nestled in among trees and brush, on the edge of Abuja. I had heard about displaced families crowding into homes of relatives or fellow church members. Today, however, we were visiting five IDP camps around the city of Yola, considered a safe area, three hours south by car from the villages and towns from which these people had fled.

At one site, in a fenced in area of buildings right in the city, owned by a private resident, 200 mostly women and children, milled around a large yard. In another, managed by a government agency, which felt more discouraging to me, about 4,000 people were packed into large halls in barracks at a former military site, some for women and some for men. Many of the people sat and lay around listless in the shade or inside buildings, in the 115 degree (F) heat, while flies buzzed around. Residents on cooking duty, stirred large pots of mush and stew for their communal meal. At a third camp, workers were in the midst of a boisterous game with the children.

This was in contrast to a small camp in a rural area outside the city where families had constructed their own small, traditional dwellings out of reeds and grasses. Men sat around under shady trees. Children played around or gathered around a water pump helping pump water for other residents. Here, life was very basic and hard, but allowed more privacy and normalcy of daily life.

Our last stop was at an EYN (Nigerian Brethren) Church on the edge of Yola, organized and developed by EYN, but for people from various church backgrounds. Over a thousand people live on the grounds in tents. Leaders described their organized children’s activities, nutrition and economic training programs for women, and medicine dispensary, assisted by the International Rescue Committee (IRC). As in other camps, they received some of their food and supplies from Nigerian and international agencies. Playful children crowded around us eager for any attention we might give them. 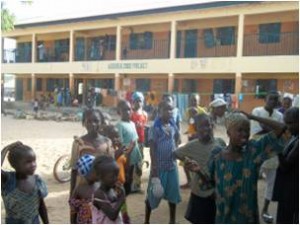 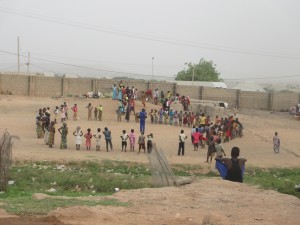 There were stark contrasts to conditions and settings, yet all were forms of the wider community responding to the needs of tens of thousands of people who had suddenly fled their homes in fear during the past year. People have been torn away from their homes, school, and work, but are being cared for, until they are able to face the challenges of returning and rebuilding their lives and communities.