Disempowerment as an IDP – Asabe 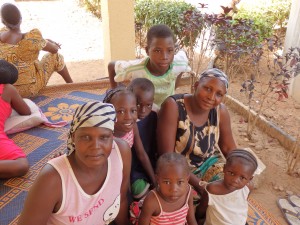 “She and her relatives spend the day moving her mat from one shady spot to another.” Photo Credit: Cliff Kindy

Being an internally displaced person (IDP) in Nigeria means that one is no longer able to live in one’s own home. Here in Nigeria one and a half million persons have become displaced because of the attacks and threats from Boko Haram. Being displaced means having to relocate to another place. It might entail moving to the home of friends or family who are quite welcoming. It might mean living in the bush where conditions might be minimal but a higher level of security is felt. Or it might mean settling into a camp where there are many other IDPs and some level of support from NGOs or government.

Recently I talked more deeply with an IDP who is living here at the Catholic Retreat Center in Yola. Through marriage she is connected with the bishop of this region and was invited to live here with her extended family when Boko Haram took over her village. She and her family are from EYN. Her father pastored at Lassa.

She has been here for five months. At home she would be busy with tasks that care for her family. Here she sits and waits for food to be given to her. She and her relatives spend the day moving her mat from one shady spot to another as the scorching sun moves across the day. She waits for clothes to be provided for her needs because she had to flee with just what she was wearing. She says she feels she has no power.

At home she has her own garden. If she needs food she goes “to pick the food, cashews, lemons, groundnuts,” to feed her family. If she needs clothes she has them in her house or can sell farm produce or animals for money to buy them. She has resources to purchase school supplies for her children.

Here she feels unable to help others – her family or neighbors. She is without the resources that are so available to her at home. This city is a strange place where she does not have access. At home she has connections but here she is rootless and powerless.

What does this feeling of powerlessness do over a long period? One begins to feel very small and helpless. A recognition of total dependency on others builds a new reality. Where one had been self-reliant and quite independent one becomes incapable of changing the dynamics that impact one’s life. For sure the larger problems appear beyond one’s influence. The problem of violence from Boko Haram seems untouchable. And even the smaller issues begin to appear like mountains.

The monotony of life here at the Center is nothing like her life in the village. There she can constantly influence her future. Here she has few ways to change her future. Living door to door here with other IDPs who are similarly disempowered and dependent makes her feel small and worthless.

Later in the evening one of her neighbors exploded with anger for the entire neighborhood to listen in to the family squabble. Having no diversions of work or community activity allows tensions to build between people until they explode. Are there networks of healing in this place?

Continue to pray for Asabe and all the IDP’s in Nigeria.   “Carry each other’s burdens, and in this way you will fulfill the law of Christ.” Galatians 6:2