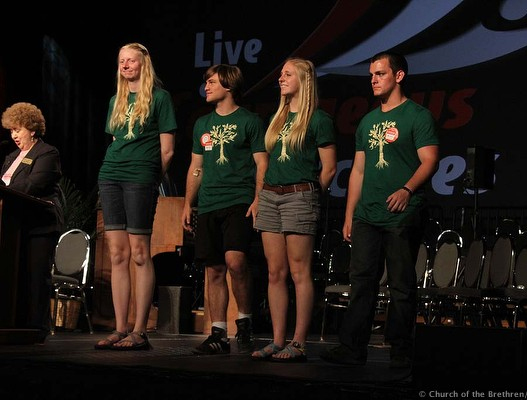 Y-P-double-T hits the big city! No, not Elgin or McPherson, but the bustling metropolis of Columbus, Ohio, to attend Annual Conference. AC was a whole new animal for us – not only was the spacious conference center and comfortable hotel room a bit of a shock after 3 weeks of camp life, but the vast variety of ages and ideas gathered at conference challenged us as inclusive teachers of peace. While we typically give a team report of our week, conference proved to be a widely different experience for each of us. So, I will tell you of our tasks followed by my opinions of AC 2014, and then allow my teammates to contribute their own unique thoughts.

As is typical of a peace teamer’s summer, our tasks throughout the week varied greatly. We were able to express our gratitude and give updates to each of our mentors and sponsoring organizations. My favorite meal was the Outdoor Ministries Association lunch, as I felt at home among camp folk who sang proudly and had great things to say about each of the camps and staffs that we are visiting this summer. 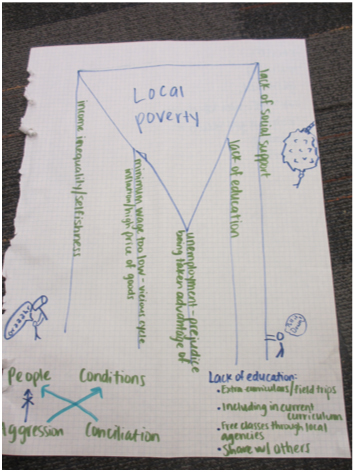 Hanging out with the youth for a day allowed us to introduce ourselves and teach some of our favorite aspects of just peace. A huge highlight came for me when a student, who was initially reluctant to discuss social justice issues because they are “important but boring,” ended up enjoying our discussion and doodled symbols of the destruction of injustice, like wrecking balls against poverty and activist stick-people. Later that night, we got to lead songs at the youth’s “campfire”, which was difficult in the basement of a conference center. Although the fire was dead, the spirit of joyful singing was alive! We were lucky enough to spend an hour with our junior high friends, who brought refreshing energy to our Care for Creation activity. It was inspirational to share conversations with representatives from organizations such as On Earth Peace and Womaen’s Caucus. These moments allowed us to recharge our peacemaking batteries in the presence of those who are radical and affirming in their work and in their lives. Above all, I particularly enjoyed getting to meet and know the families of my fellow teammates, along with reconnecting with beloved members of my home church and beyond.

This, believe it or not, was my very first Annual Conference, which gave me a unique and slightly critical perspective of the entire experience. Unfortunately, I was rather ill throughout the week, which meant that I was bed ridden more often than I was listening in on business sessions or hanging out in the exhibit hall. But of the events I was able to attend, I was mostly pleased. As a peacemaker, I was encouraged by those people and groups that called us to engage in conversation with those of different opinion than ourselves. For example, Bill Scheurer of On Earth Peace challenged us to record short conversations of our visions of peace with people that we may not normally approach. I was encouraged by the active listening that occurred during business sessions, interlaced with sporadic hymn-sings and blessings of those whose work we benefit from and deeply appreciate. This is not to say that there weren’t any frustrating aspects of the conference process and this conference in particular. Like many, I was disappointed by the outcome of the vote on the climate change paper. I recently finished reading Shane Claiborne and Chris Haw’s book “Jesus for President,” which has ignited a radical reformist spark inside of me that did not seem to be satisfied by conference. But, as Chris’s sister Elizabeth said, we are called to grow where we are planted, so I challenged myself to do just that. Overall, the immense support that was expressed to our team was overwhelming and humbling. So, thanks to our sponsors and our many supporters for a great conference, but mostly for sending us off on a wonderful journey and checking in with us along the way!

Annual Conference was a wonderful experience this year as a member of the peace team. I was struck by the enormous quantity of people who showed up at conference that we had already met throughout this summer. It was an utter joy to see how many people we’ve already connected with—and we’re only halfway done! One of the biggest highlights for me came in the form of an insight session that my Granddad Crouse and I were asked to lead by On Earth Peace. We were to converse about his dreams and my visions of peace in this world. He shared stories upon stories such as defending his peace stance in Turkey and Ecuador as well as sharing his dreams for the multi-ethnic church he is helping plant in Florida. I spoke about being challenged by classmates in debate class about my peace stance, holding a peace event in the military community that I live in, and describing some peacemaking role models that I appreciate.

The culmination of this experience for me happened more inside of myself rather than out loud. The last question on the list my Granddad and I created was, “How do you see your vision of peace coming to fruition in the world?” We didn’t get to this question because we had limited time, but my Granddad’s ending thoughts connected perfectly to my planned out answer. Before the session, I had reflected on this and came up with two words: awareness and intentionality. Awareness of the needs, feelings, and culture of those around us is vital to peace between individuals. Furthermore, using peaceful practices like I-statements and avoiding gossip takes intentionality and is not necessarily our instinct, but makes a huge difference in constructing positive relationships.

So, at the end of the session, my Granddad spoke about the crisis with the kidnapped Nigerian girls and how he has been struggling with how he can act in response to the situation. He stated that after much thought, he had developed a plan for himself. This plan contained an extensive title and nine bullet points of action including 1. Taking at least five minutes per day to pray for the girls, their families, and the kidnappers. 2. Fast from (insert specific foods and such here) for a certain amount of time. The list went on. The last bullet, number nine, said Granddad was going to seek out Muslims in his community and develop friendships with them. This is when I began to cry. My Granddad, in number nine, expressed the desire to show acute awareness of the culture of those around him. His plan, nine specific actions, is literally the definition of intentionality. Basically, my Granddad was fulfilling my vision of peace right before my eyes. And he didn’t even know it.

While this wasn’t my first Annual Conference, I only really have memories of one other. That one other conference was the 300th Anniversary conference in Richmond. For me the most impactful moments of my week came not from anything at conference itself, but from the people I had conversations with outside of sessions and the gym I had at my disposal in the hotel. Many of the people I talked with were old friends, some of which I hadn’t seen in years. Be them people I had worked at Camp Bethel with or gone to Christian Citizenship Seminar with, the ability to rekindle relationships was great.

As silly as it sounds, the other aspect of our week at conference that really helped lift me up was having access to a gym. Be it this gym wasn’t exactly what I would pick (no squat rack equals a sad Jake) but it did give me an opportunity to finally lift semi-heavy things again. This was especially important for me on the Fourth of July. For those of you who don’t know, I am a Crossfitter. One aspect of Crossfit is the use of “Hero Workouts” to honor fallen police, firefighters, and military. Even as a pacifist this is an aspect of Crossfit that I have felt very passionate about the reason behind these workouts. These workouts are typically done on some sort of day of military recognition, such as Memorial Day or 9/11. The workouts done on these days are named after and done in honor of a particular person or persons that died in the line of duty. In the case of this Fourth of July I did the workout “Joshie” in honor of Army Staff Sergeant Joshua Whitaker, who was killed in Afghanistan on May 15th, 2007.

This workout stuck out to me for two reasons. One, I had the equipment available to do the workout. Two, my sister is the same age as Joshua was. The thought of losing my sister helped me empathize just a fraction of what Joshua’s family must have felt. While I did this workout I didn’t play any music, and I didn’t have a workout partner. I used this time as a reflective time for myself and my life. “Hero Workouts” are made to be longer, harder, and more painful than normal Crossfit workouts. But the mindset, at least for me, while I do them is that that pain which I feel now is nothing compared to the sacrifices that the person which I am honoring had to endure. I don’t agree with Joshua that the way to solve the conflicts in Afghanistan are through military action. But, I respect him for having the courage to stand up for what he believed in, even at the risk of losing his own life. I appreciate the freedom that I have and recognize that that freedom is what Joshua died for.

I think far too often in discussing peace or our opposition to war we fail to recognize the courage it takes to stand up for what you believe in. Yeah, it’s not necessarily the same things we believe in, I still think a certain level of respect and honor needs to be bestowed upon the members of our military. Service has many forms, just like peace and love do.

Annual Conference was a struggle for me this year. I had experienced dissatisfaction at business before and I knew the worship messages were not what I was used to, but despite this knowledge it all managed to bother me again. It has been some time since I was at Annual Conference and I attempted to give more of myself in the process this time, to pay more attention to the goings on of the church and the message of each worship. But I still felt disappointed and disconnected. I wanted courageous leaders, people who weren’t afraid of the reaction of the denomination to their own personal beliefs, but need to share that real piece of them because that is what Jesus calls us to do. We need to be genuine and personable. We need to be open; peace and pacifism are not so limited in scope as to just being against war.

Where I spent my personal time was also a struggle. My family all traveled to Columbus, Ohio for Annual Conference. Some came for different reasons than others but we all congregated with our church for the first time in two years. I felt truly blessed to have this opportunity to be doing work that I loved and also be able to visit with my family. I talked extensively with my brother, sisters, grandmother and mother. The Youth Peace Travel Team also got to meet my family and learn about the people that are the main players in my stories. I love the Youth Peace Travel Team, but it was a struggle balancing time with them, Annual Conference activities, and my family. Instead I just combined two of my favorite activities and asked the Peace Team to hang out with me and my family. I enjoyed the experiences of Annual Conference and felt blessed to have the opportunity with my family.