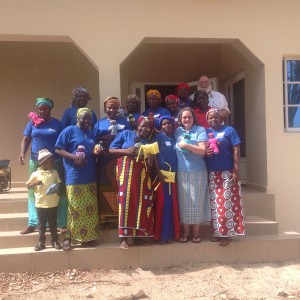 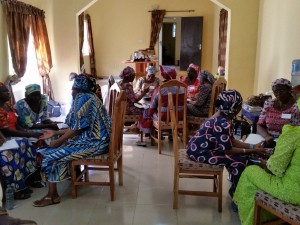 respond to trauma and how to support resilience. The group was then presented with the Healing Hearts Curriculum that consists of nine sessions based on the Beatitudes in Matthew 5, with accompanying Bible stories from “Shine On: A Story Bible.”

Participants received a small version of the Kit of Comfort that CDS volunteers use with children who are affected by disasters, with art materials, bean bags, and beautiful hand-made dolls and animals that Church of the Brethren congregations and individuals across the country created for this work.

Day 2 was spent completing the nine sessions and planning for the afternoon practicum at Favored Sisters school and orphanage. The practicum work was enthusiastically received by the children, as well as the trainers.

All of the women in our training group have been affected by the violence of the Boko Haram. They all had to flee at some point, some many times. They have taken other families into their homes; they have taken children/orphans into their homes. They have responded to the crisis with compassion and faith. These women were inspiring to us. They have found amazing ways to cope with crisis through their love of God, through music, prayer, showing compassion, and being helpers.

I’m so grateful for this opportunity to travel to Nigeria and work with the wonderful people we met! Such gracious hospitality! Our relationships were full of friendship, warmth, joy, compassion. It really was a life-changing experience.

My biggest take-away was the strength, intelligence, hospitality, love and resilience of the Nigerian folks we met.  I have never experienced such pure integration of faith in my life, and it left me amazed, humbled and challenged.  The training itself, as I’ve been telling folks, couldn’t have gone better, due primarily to the receptiveness of the women theologians.  We had designed the presentation to be emergent versus didactic, and boy did it emerge via the insightful, energetic and hungry response from the women.  They took it all in, made it their own and, during their “practicum” at Favored Sisters School, demonstrated a capacity for loving connection with the children that left us awe-struck.  So many stories emerge from this experience, but they can be summed up by saying that I am convinced that children’s lives were changed that day!  The continuity and sustaining of this work is assured by the strength of these amazing women.  We were pleased also to meet with representatives from the Mennonite Central Committee who, while disappointed they had not been a part of the training, were enthusiastic about finding something that could feed their newly recognized awareness of the need to address the trauma of children, as well as adults.  They challenged us to adapt the curriculum to be appropriate for Christians and Muslims alike and Kathy and I have accepted that challenge.  Our vision is that this work can expand and provide psychological comfort to many children. 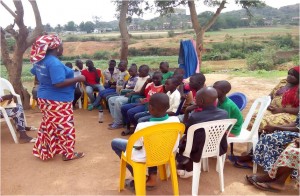 Children at the Practicum 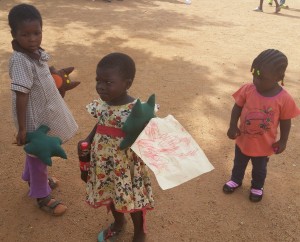 A Child holds her drawing

Stories from the Practicum

One little girl (under age 2) started screaming and ran away when one of the trainers was on the ground during the dramatization of the “Good Samaritan”. She thought it was a dead body.

One group did the session, “hunger and thirst for righteousness” which included making an origami paper cup, bringing a stone to leave at the “altar” in the cup, and taking a piece of sweet bread back with them. They sang, “Come, bring your burdens to God” as they did this. The trainer said, “The children needed something like that. They immediately learned the song. They immediately did the dramatic experience, bringing their burdens, leaving them, and taking the sweet bread. They feel burdens. They put their trust in God. One girl said that she knows now that she can carry her burden to God and remove that burden from her.”

One girl told her trainer, “When we fled from Boko Haram, I prayed that God would never forgive them. Now I will pray that God will forgive Boko Haram.”

One group did the activity where they held dolls/stuffed animals and sang “Jesus loves me”.

One of the directors at the Favored Sisters School said, “Some of these children will never, never forget that you came to us today.”

One little girl told her trainer, “You. You are my mother, because my mother is not here.” The trainer was so touched that even after a short 45 minute session, they bonded with these precious children. Another trainer said that children told her, “They were so happy, it was as if they had seen their parents.”

Response after the training

Suzan (Director of Women for EYN)

“I’ve been getting calls during our session, people who heard about this and have children who are traumatized and need help.Our future generations will live to tell stories about how the Church of the Brethren came to them.”

“I’ve been getting so many texts, calls, and emails from the women theologians over the past two days. They are so excited about doing this work.”

“I saw three children last evening walking around. I was showing them some pictures on my phone. They saw the picture of me standing by my car that was burned out, and asked about it. I told them the story of the Good Samaritan. I gave them paper to draw someone who has helped them. They each were so thoughtful, then they drew someone. Each one of them had someone in mind to draw. They told me the stories of their pictures and who helped them.”