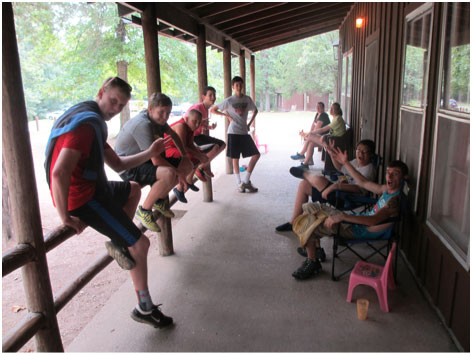 Something that we have greatly enjoyed throughout our summer on the YPTT is getting to experience the different culture of each camp we visit. While each camp does indeed have unique and memorable traditions, the culture of Camp Hammond Mill was joyfully unlike any other. Christy had been talking up her home camp all summer, informing us that it was “different”, but incredibly special. We agree! 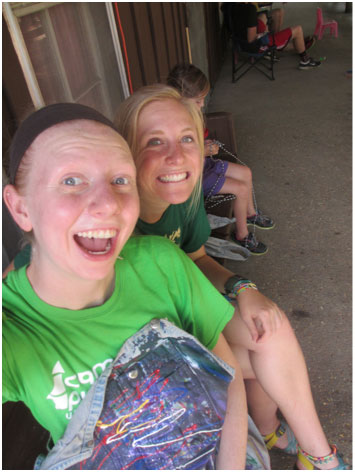 “Joyfully unlike any other”: laughter at Camp Hammond Mill

Two of the biggest components of Camp Hammond Mill’s culture that I noticed were laughter and freedom. The modest campground was alive with the sound of laughter at almost all hours of the day. The campers interacted enthusiastically during the our morning sessions, bringing their own life and spunk to small discussion groups and skit performances alike. Mealtimes were full of jolly banter, especially when the “Pretty Pants” made an appearance (a stylish Camp Hammond Mill tradition). We heard resounding chuckles in the water, from frigid early morning polar bear swims to a day-long youth float trip. My favorite instance of laughter came from late night games with the youth on Thursday. We played a few simple rounds of Telephone Pictionary, Psychiatrist, and Signs, but their bonds with one another were apparent as we were all doubled over and genuinely enjoying each others’ company.

Freedom came from the abundance of free time throughout the week. While some camps’ free time leads to campers retreating from one another, Camp Hammond Mill’s free time often encouraged creativity and deeper bonding. We enjoyed “porch time”, where whoever was free would gather on the mess hall’s porch and simply spend time together. Some of the younger campers took every ounce of freedom they were given to make dozens of dragons out of pipe cleaners – refreshing products of active imaginations. Campers and staff alike would take time to write each other goofy notes and notes of affirmation to place in each others’ envelopes throughout the week. Even organized volleyball and ping pong tournaments took up our free time, but each involved getting to know new opponents and sharing in victories or losses together. 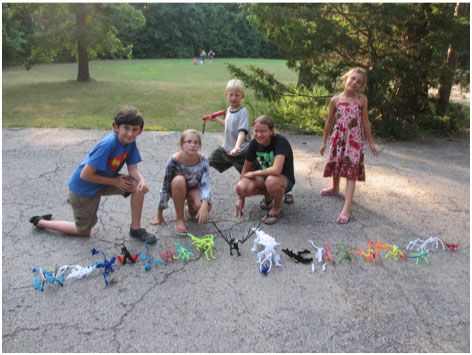 Through laughter and freedom came peace, as the small but mighty group of Camp Hammond Mill campers became a family together. Despite many injuries and illnesses, late nights and early mornings, torrential rain and stifling heat, each person gave of themselves. We made new friends, looked out for the best interests of one another, and ultimately relished in the joy and learning that came from a relaxed but quirky camp culture.

One memory of Camp Hammond Mill that will stick with me is the first day we went down to the river to swim. A pair of trees had fallen down during a storm and washed up on a rock that the kids usually climbed onto and jumped off of into the river. We decided to try and move it as a group, so a few of the counselors, campers, and myself positioned ourselves around the trees to try and move them. After about ten minutes of slowly rolling the trees (largely helped by the use of a large branch as a lever, yay physics) we finally dislodged the trees from the rock and into the rest of the river. We then proceeded to pull the trees down river in an attempt to bring them away from the swimming area and up onto the bank. It wasn’t easy, and most of us got a few decent scrapes from the trees. But, it was definitely a fun and memorable way to get the
week kicked off and I’m sure that I will remember the time that I helped move a freaking tree!

Comfort. Camp Hammond Mill brings me an overwhelming sense of comfort each time I arrive. Most likely ‘cause it’s home. This year was no different, besides the shift from camper to staff member that being on the YP double T brought. Reconnecting with some of my greatest friends there, meeting the new faces that come each year, and seeing the familiar, beyond beautiful gorgeousness of the crystal Blue Spring and cliffs at the White River all brought me great joy. My roommate Laura from college came on Tuesday of camp and counseled for the rest of the week. We took campers on runs and reeked havoc together on the river during the float trip. Getting to share my fellow YPTTers with her as well as the experience of my home camp was a huge highlight for me. Another wonderful moment occurred on Thursday night when the rain was pouring down. We relocated our campfire to under the pavilion and were singing songs. One of the young girl campers had to go to the restroom badly, but no one wanted to take her. So, I took her hand and we ventured into the rain together. We ended up having a ton of fun jumping around in puddles and running in the torrential downpour. Soaked to the bone and laughing, she made it to the restroom in time and all was well. Those moments of pure exhilaration and happiness are just priceless. I feel so fortunate to have gotten to share Camp Hammond Mill with the YPTT!

I cannot stress how cool canoeing for nine hours is. I understand it seems like a long time to be doing anything but this was truly a unique experience (not just because I didn’t get sunburned although I was exposed to the sun for more than two consecutive hours). The experiences of the river were exhilarating, a bald eagle that perched twenty feet above the river’s surface on a branch, conversations on the water, and going out of one’s way to pick up trash. It was a touching experience as nature, man and the spirit all came together to form what we call beauty. I appreciated the majesty of the surroundings and the respect that the campers felt for the river and springs of the area. The campers collected an impressive amount of trash during the trip and this just further distinguishes the people of Camp Hammond Mill.

The canoe trip was not all. Ping pong managed to be more than a simple competitive outlet for me at this camp. Previously I enjoyed ping pong for its simplicity and good natured competition, but I bonded with an individual over the game. Having faced off in the tournament of the camp together, we had enjoyed each other’s company. One day in which I took time for myself to reflect on the journey I had been on this summer I was approached by Vanita. She quickly challenged me to a game of ping pong remarking that the previous game was a fluke (I am only teasing, Vanita, you were a pleasure to get to know). As the ball was hit back and forth and the rally became more heated we each opened up. Both of us spoke of experiences that were integral to who we are now. The importance of role models for children and how to grow into an individual you yourself respected. It was refreshing and new for me to open up so quickly to someone. I appreciated the honesty of my newfound friend and the moment meant a lot to me. Sometimes we try to do so much and impact everyone, but a moment need not be monumental. It need only help an individual, a single person, and that can mean the world.