This summer, the Office of Peacebuilding and Policy welcomed a group of junior highers for the Washington, D.C workcamp. The following is a guest blog post from Marilyn, a junior high workcamper who participated in the workcamp. 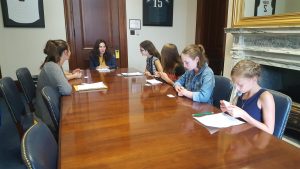 Workcampers meet with a staff member from Senator Casey’s office.

On July 29th, 2018, three other members of the Mountville Church of the Brethren and I packed our bags and drove to a Christian work camp in Washington, D.C. All of us, including our two advisors, were extremely excited. But I had no idea how much my experiences would positively impact my life and mindset. It was here where I realized how much being a Christian and being a citizen overlap.

During this workcamp, me and 10 other campers worked in the Marvin Gaye Parks. On the first day of work, we weeded and composted in the Marvin Gaye urban gardens, where people who normally wouldn’t be able to buy fresh fruits and vegetables can pick their own in exchange for garden work. This makes these gardens valuable to people in need of fresh produce.

On the rest of the camp’s work days, all the campers participated in removing Kudzu plants from some of the parks’ beautiful land and trees. This invasive plant was concealing the beauty of nature that parks can provide that people living in the city rarely get to experience.

One day, after a much needed shower and a change of clothes, everyone walked to the Senator’s office to advocate for the LWCF. The LWCF stands for the Land and Water Conservation Fund, and it is a program where the government works to protect national, state and local parks by helping to fund them.

The money given to the parks is often used to help keep it clean and safe. Through working in the Marvin Gaye Parks, all the campers realized that parks play big parts in our communities, especially parks in the city, where people have an opportunity to escape the busy, crowded place that they live in. But this important fund will expire on September 30th, if Congress doesn’t take action. So, in the Senator’s office, we spoke to PA’s senator’s education board about why the LWCF should stay in action. The person we talked to listened to our every word and said she would do all she could to help keep the fund going.

Parks such as the Marvin Gaye Parks are very important to our communities, but we often take them for granted. Parks give people a place to exercise, socialize, and learn about nature. So conserving them is a big deal, and at work camp, we learned that being a Christian means standing up for what you may, or not believe is good for our communities.

While being a Christian does mean standing up for what you believe in, it also means serving God by serving people. When you help to take care of your community and its citizens, you are also loving God and that is where being a Christian and being part of a community overlap.

When our workcamp ended, I had a completely different mindset than I had before it started. From working and caring for a park, I realized that helping our communities is a big part of loving God, and that is what being a Christian is all about.