One of the things that I appreciate most about the Christian faith is that it provides a common denominator between people around the world. This common identity can be a catalyst for important relationship building across national boundaries. In early June, I joined the Church of the Brethren young adult work camp trip to Burundi, hoping to both build relationships and see some of the great peacebuilding work being done in the African Great Lakes region. These relationships and my increased understanding of the challenges in Burundi will feed into the work of the Office of Peacebuilding and Policy, as we increase our level of engagement with advocacy relating to the region. 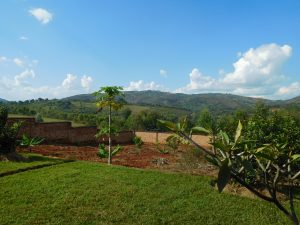 The view from the THARS center porch in Gitega. Photo Credit: Tori Bateman

Located south of Rwanda, Burundi is consistently ranked among the poorest countries in the world. In 2017, the GDP per capita was just $818, according to the International Monetary Fund. In addition to poverty and humanitarian concerns, Burundi has a history of genocide and election violence. Conflict between Hutus and Tutsis killed upwards of 300,000 people in several outbreaks of violence between the 1970s and the early 1990s. More recently, political conflict has led to instability. Just a week before our work camp traveled to the region, 15 people were killed in election violence related to a referendum vote. 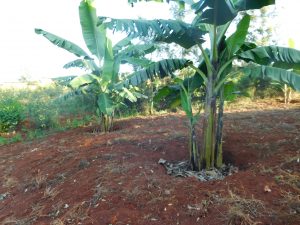 Banana trees planted using the agriculture methods taught by a educational program funded by the Church of the Brethren. Photo Credit: Tori Bateman

Our group was hosted by Trauma Healing and Reconciliation Services (THARS), a partner of the Church of the Brethren’s Global Mission and Service office. THARS provides mental health services to Burundians still impacted by the history of violence. This includes operating listening centers, facilitating support groups, and conducting training workshops. In addition to mental health work, THARS runs two programs that are funded by the Church of the Brethren, including training for farmers and a feeding program for Batwa schoolchildren. 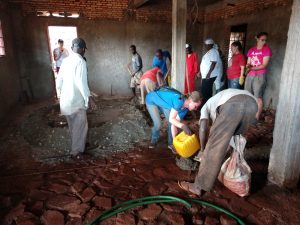 While at THARS, our group worked on two construction projects. At one location, the team knocked down walls in a building that was to be re-purposed as a library. Just down the hill, another group was pouring the concrete floor in a new kitchen facility. Our team worked alongside a Burundian construction crew and the national staff of THARS, who had traveled to Gitega to participate in the work camp.  These projects included a lot of shoveling, carrying bags of sand and rock, and transporting concrete via bucket brigade. 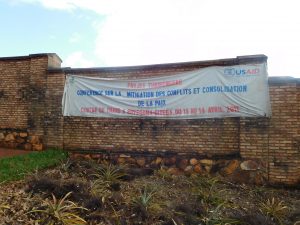 A banner for a USAID-funded peace conference that was held at THARS in 2011. Photo Credit: Tori Bateman

The impact of United States policy on Burundi could be seen everywhere we traveled. The USAID logo denoted vehicles, events and programs that have been funded with U.S. foreign aid money. Because of the reality of this impact, it is important that offices like ours maintain awareness of the situation in the country, and amplify the voices of Burundian peacebuilders in U.S. policy discussions.
My trip provided many useful insights into potential advocacy avenues for our office. During a meeting with one of the Office of Peacebuilding and Policy’s partners in Bujumbura, for example, I heard about one of the biggest challenges facing peacebuilding work in Burundi- a lack of long-term funding for projects. Many peacebuilding projects are only funded for one year, meaning that the work lacks consistency, there is not time to learn from mistakes and adjust programming, and programs have a limited impact. It is important that we share this funding concern with relevant government staff in Washington, D.C, as we seek to make peacebuilding programs as effective as possible. 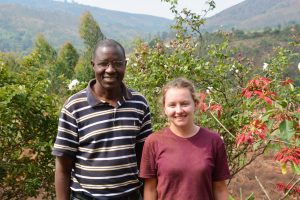 I am grateful to THARS and the people of Burundi for their hospitality. Going forward, I am excited to engage with the Burundi Working Group in DC on behalf of the Office of Peacebuilding and Policy. Made up of NGOs and government agencies that work in Burundi, the group plans to engage with legislative staff, the administration, the interfaith community, and broader civil society. The group will work to increase awareness of the political and humanitarian situation in the country, and advocate for policy and funding that will support the important peacebuilding work done by partners like THARS.