This interview was submitted by EYN’s Disaster Team Correspondent. Bear in mind that some of the blog may be difficult to read due to the horrific nature of the content. As we read news of the Dapchi girls being released and we near the 4th anniversary of the abduction of the Chibok girls (April 14th), we remember and pray for the hundreds of women, young men and girls who remain in captivity under Boko Haram.

Here is what was shared by one of the rescued/released Chibok girls.

“ We stayed under trees, even when it was raining, no room, we were surrounded with thorns. When we were abducted, they gave us food. Sometime 2 to 3 cows were slaughtered for us. Ah! But afterward when we refused to get married, while some were married, they denied us food. We had to feed on bush yam, leaves and soup that was what we ate.  Those that agreed to be married left and were married in Gwoza when Boko Haram captured the place, but we that refused to be married are those released.”

On what about those that are married? “I don’t know. But for us, Shakau wanted to know our stand, ‘you are not doing sallah, I don’t understand which religion you are practicing?’ Then we said not that we are not doing sallah but we don’t believe the religion (Islam). He said ‘do you mean you still have your religion in mind since you are not following what is being taught?  We did not bring you here for love or clothes. But those of you asked for marriage’.

“Then he gathered those that are married and asked them, all of you who are married if you want to go back to your homes we can take you back. Then they replied that they prefer being killed in the forest and proceed to Aljan (Paradise).  They are up to 60. Those of us killed by bomb are up to 10, and 9 died in the process of delivering, some are paralyzed, others lost their hands or legs, others can no longer hear properly, to communicate with them one has to shout before they are able to hear. The forest where we stayed has no house but they (BH) have tents where they cover themselves when it is raining. There were many guards around us”. 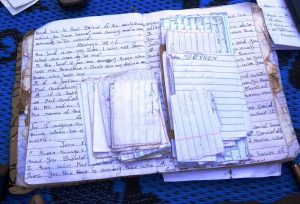 “This is what we were writing among us”.  She showed us an exercise book where she said they used to write Words of God and letters to friends themselves in the forest.

“We continued praying when they are not around us. We were 205 abducted, 106 are freed. We were not allowed to stay alone. No. When we were to come home, 4 among us refused to come with us, they said they want to stay and follow Islam.  They said if their parents would come and join them they will receive them to Islam. “When we refused to be married they forced us to do some hard work, breaking of stone, cutting trees, washing their wife’s clothes, constructing of their thatch houses.  they said we are slaves, so we were forced to do different works. We cannot describe where we were. Some of us attempted to escape. When they were caught they were given 100 lashes, denied food for good two days, and were tied with ropes and thrown under trees. They were separated from us for short distances where we could see them, but we cannot help them. But we sometimes hide and snuck under grasses to assist them with water, when we see BH then we ran.”

“One day Shekau’s deputy came to us – he dug a hole and lay down one of the girls in front of the hole, that she is going to be slaughtered. They called one girl, said to have been abducted when she visited her boyfriend in military barrack in Chibok. She was asked to slaughter the girl laying down. She said ‘is she a sheep or goat? ’one Boko Haram member replied her, yes she is a goat but not edible.  She refused, that she cannot slaughter her.  As she persisted, she was told to lie down so that she could be slaughtered instead, which she did. Then some of them (BH) said leave her while other members of BH said free them but would punish her when they would be freed.

We were not allowed to look at them in the face. They beat us. When we were in the forest, a man appeared from the air to rescue us, but he fell in the midst of BH and was tied with rope dragged to forest and was killed.  Another man, a father of one of us, went to free his daughter, that why his daughter should could be abducted. We made to understand that he is one of the sect members. Then BH told him if we are to free any not only one but all others.

“It is not true that NGOs (Red Cross) take food to the forest by plane.  They only went there when they wanted to pick us, even that day, they did not carry anything along; they were even waylaid by BH and were warned if they are coming to take us by force they (BH) will kill them along with us.  So, they were afraid and left.  Later on, Boko Haram called them that they can come. Shekau and Buhari communicated.”