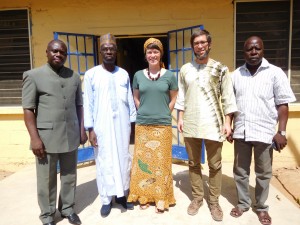 Meeting with the EYN President, Vice President, and General Secretary

Jennifer Hosler and I recently traveled to Nigeria to consult, connect with, and support the development and peacebuilding work of Ekklesiyar Yan’uwa a Nigeria (EYN, the Church of the Brethren in Nigeria). Jennifer traveled to Nigeria in her role as a member of the advisory committee of the Church of the Brethren’s Global Food Initiative. In this role, she met with EYN leaders and members who had traveled to Ghana in September 2016, together with Jeff Boshart (Global Food Initiative director) to learn about soybean projects.

Most EYN members and other residents in northeast Nigeria are farmers (often small-scale) who grow food for family use and to supplement income. Due to the extensive displacement by Boko Haram over the past several years, the ability to plant and harvest has been severely disrupted. Displacement from land, return after planting season, and fear of ongoing and sporadic Boko Haram attacks in some areas have led to reduced harvests and food shortages. Some communities face crop theft and terrorism from Boko Haram. During our visit, we heard that Kauthama, a village not far from EYN headquarters, had been attacked and 80 percent of its homes and crops were destroyed or taken. 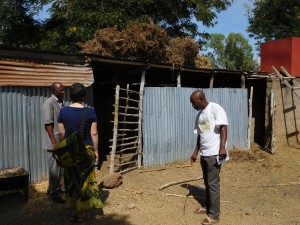 I traveled as part of my work with the Office of Public Witness. Much focus was on the growing food crisis and famine in the northeast as well as on peacebuilding. The Office of Public Witness has been raising concerns about Nigeria’s food crisis in Washington, D.C. The office collaborated to organize a briefing for US Congressional staff in November and sent out an action alert asking Brethren to contact their elected officials to adequately address this emerging famine.

As former peace and reconciliation staff with EYN from September 2009 to December 2011, we were also able to use this visit to support EYN and other groups’ peacemaking efforts. We taught a three-hour peacebuilding workshop at Kulp Bible College, met with the EYN Peace Program staff in Kwarhi, and visited one of its new initiatives in Yola.

We were hosted for a meal by the Adamawa Peacemakers Initiative (API) at American University in Nigeria (AUN), also based in Yola. API is bringing together Christians and Muslims to meet human need and to build bridges between communities often wracked by distrust. During the massive influx of internally displaced persons (IDPs) into Yola in 2014 and 2015, API worked with AUN to provide emergency food relief to thousands of people in need. Additionally, they are working at reconciliation in communities through women’s empowerment programs, informal education, and sports. Though no formal agreements were made, API responded enthusiastically to the efforts of EYN for peace, meeting food needs, and trauma healing.

We also had extensive conversations with staff of the US embassy to Nigeria, highlighting the effects of displacement, the causes of violence, the food crisis, the Nigerian government’s response, and needed work for peacebuilding. 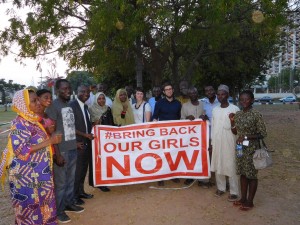 — Nathan Hosler is director of the Church of the Brethren’s Office of Public Witness in Washington, D.C.

One thought on “Trip to Nigeria connects with peacebuilding efforts, food crisis needs”