When gardeners from across the country come together for an intense weekend of discussions and visioning, incredible things can take shape. That is precisely what happened when five Going to the Garden partners came together with staff from the Global Food Crisis Fund and the Office of Public Witness for a retreat in Wisconsin earlier this month. 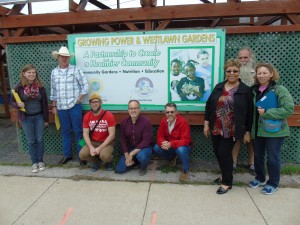 Started in 2012, in the midst of a nation-wide drought, Going to the Garden has been a way for congregations throughout the ecumenical community to address local food security and hunger needs by providing one or two grants up to $1000 to start or supplement community gardens. As a collaboration between the Global Food Crisis Fund and the Office of Public Witness in Washington, DC, Going to the Garden has also sought ways to connect this local work with advocacy and addressing larger policy issues relating to food. Due to a decreased volume of grant applications, that portion of Going to the Garden was closed in early 2016, leaving a space to be filled with new ideas and plans to further the work of the program’s partners.

Through group discussions with the garden partners over the course of the weekend and with inspiration from visiting Growing Power, a large and dynamic urban farm in Milwaukee, the theme of wanting to be more strongly involved in local advocacy around issues of community hunger and food security was frequent. One of the original goals of Going to the Garden has been to engage the denomination in larger, nationally-focused, advocacy pieces, but finding and maintaining interest in working on this has been difficult. The conversations from the retreat showed that many of the gardeners are already involved in their own advocacy work but are doing it on local levels in ways that affect their communities directly.

From all of this visioning, a plan to establish a Garden Advocate program emerged. While the gathered group reflected that they were already doing positive local advocacy work, it was noted that having someone who is capable of giving greater attention to such work would strengthen what is being done. Through the Global Food Crisis Fund, several Going to the Garden partners will be able to apply for funding to support someone in their community with interest in this work to act as a Garden Advocate on their behalf. This person will be able to engage in local advocacy work being done around issues of hunger or creation care while also working closely with the Office of Public Witness to connect on larger national issues on the same theme.

It is the hope that the creation of a Garden Advocate program will strengthen the capacity of these gardens to be able to help hungry neighbors while also working for larger systemic change to ensure everyone in our communities and our country no longer has to worry about being hungry.