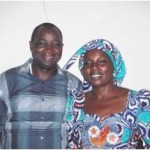 Wagga was taken over by Boko Haram militant group in July 2014.  Many families both Christians and Muslims were taken hostage.  Wagga had experienced kidnapping of children and women even before the Boko Haram took over the village. Some Muslims were in support of the rule of Boko Haram but they did not believe the Boko Hamam’s mode of Islamic worship. Fadimatu Garba is a Muslim lady who hailed from Uvaha in Borno State but got married to Mallam Garba Ahmadu from Madagali. They were blessed with 10 children 8 of which are still living. Fadimatu saw the butchering of her husband and two brothers right before her very eyes. 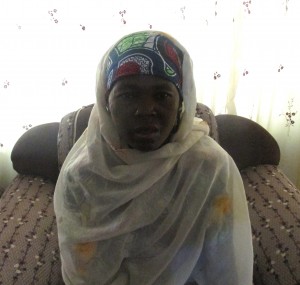 Fadimatu shared her story with me last night. She said a huge amount of money, arms and brain washing was used to initiating young men and women into the Boko Haram group.  The contract of belonging to the group is sealed when you kill your own blood i.e. father, mother, brother or best friend.  You must also organize a gang rape on your mother if you are a man before killing her. This act does not portray Islam but again they always chant Allahu’akbar for every gunshot or during a mass movement on the street.

Her whole family lived in the village under the leadership of Boko Haram. When the military took back the village, the local guards of the village (called the vigilante group) attempted to clear the village of those families that lived with the Boko Haram. Two of Fadimatu’s brother-in-laws were killed.  Other Christians and Muslims families were also killed.  (The brain behind such killings by the vigilante was not to allow men that stayed and acquired the Quran education from Boko Haram to be part of the new community. They believed that they were part of the Boko Haram militant group and they may continue to spread the ideology when people go back to those villages in order to start a new life.  Another reason may be the anger by the Christian survivors who felt betrayed and cheated by their Muslim brothers took revenge.) Right after the military and vigilante group removed those present during the occupation of the Boko Haram, the militant group came at night and attacked the village again to retaliate for the killings. This final attack by the Boko Haram caused even more harm on the village of Wagga because many people were exhausted and had no strength at all to run to safety in the nearby bush so most of their children and wives were lost (captured) to the Boko Haram.

Fadimatu Garba had been sick; she was suffering from fibroids even before the Boko Haram took over the village.  She had lived for more than a year without medical care and became very sick from additional health issues.  Being traumatized, living a stressful life without much food and without a husband to help, she decided to re-locate where she could find some help.  She left the village to locate her brother Usman who is a staff with COCIN Church.  Her hope and prayers was to meet her brother for medical treatment, she was advised by the villagers to locate me (Markus Gamache) instead.  It was believed that since I am working with a Church I must know where her brother who also worked for Church of Christ in Nations (COCIN) might be.  I had never met Fadimatu or her husband in my life but she was determined to reach a place where she could get medical and psychological help. Fadimatu left Wagga on Sunday 22nd November 2015 headed for Yola – not knowing that Yola was about seven hundred kilometers away from Jos where I live.

First day in Yola.  She arrived in Yola at about 3.00pm but she had nowhere to go, no phone and she knew no person that could take care of her.  She was offered a place to sleep in the motor park under harsh weather.

During her second day in Yola, she continued looking for me.  Someone took her to a market in other to get in touch with Muslim tribal men.  She found one person who sold meat at the market to help her not knowing that he was just trying to get rid of her.  He took her to a cross road where he told her to stand and  that soon she would see her brothers passing by.

The second day, Fadimatu continued to ask people, “Where is Markus Gamache?”  Pastor Maiva from EYN Church in Yola was on his way to the mechanic garage to repair his broken car when he heard Fadimatu asking people on how to locate me in Yola instead of Jos.  So the pastor interviewed her to ascertain how genuine she was.  Pastor Maiva found out that she really needed help.  He came to her aid, found a place for her to stay overnight, paid for her food and called me.  I spoke to her via his telephone but I was at a loss  because I had no idea who she was. I agreed to allow her continue her journey to Jos.  Pastor Maiva paid for her transportation and other immediate needs. The commercial driver was kind to call me on their arrival to Jos. Pastor Maiva did not mind about her religion (Muslim) but treated her as a sheep needing a shepherd.  He knew that she was a Muslim but he followed Christ’s command to “Feed his sheep.” I went to the motor park to take her to my home and only proved I was the right person by communicating in our shared language.

First evening and night in Jos.  Fadimatu arrived in Jos at about 4.30pm on Tuesday, she arrived at my house and she met my mother where both of them were surprised to see each other after such a long time. My mother now had a Muslim sister to pray together in the house. It was another night of hearing about people that were killed during and after the attack.  Wagga village is still experiencing some secret and mysterious killings on a weekly basis.  There are no men staying overnight at the village but even during the bright day when people work on their small farms in groups there are attacks by unknown people.

Challenges in her visit. On the second day of Fadimatu’s visit in Jos, the young men that are still staying with me brought me a frightening message. They testified that Fadimatu and her husband were the first family that hid Boko Haram in the village even before the final takeover of the village by the group.  They met me with the request to please relocate her to another place because they do not think she is here for treatment or help. To the young men, Fadimatu was a suspect and they pleaded with me to please hasten the process of finding her brother and taking her away.  One among the young men suggested searching her small bag to see if she was a spy or carrying anything harmful.  As a human being I was totally heartbroken by their response. Even though I know that in a time like this it is dangerous to welcome an unknown woman with a head covering into your house, I believe in the spirit of interfaith that the church premises is a place where people could come and find peace, hope and encouragement.  I can never fully protect myself and my family but God is in ultimate control.

Fadimatu needs our prayers.  Janada, my wife, and my mother are trying their best to make her feel at home and perform her Sallah as when due and move around.  My effort to trace her brother is still on but nothing is happening toward his whereabouts.  Fadimatu went to the hospital for several days for treatment and was then admitted. She is suspected to have a cervical cancer.  She is now been referred to teaching hospital in Jos for more screening.  Up to now nobody has come to see her and she is being taken care of by Janada at our home.  We will take care of her hospital checks by tomorrow.

Conclusion: We are lucky to have found Fadimatu but there are many small children on the street without parents, widows without care and families without help.  Places like Madagali and Gwoza are still not very accessible to volunteers who want to offer first aid. Even in Yola, Mubi, Michika, Chibok, Askira, Bama and other places in Yobe and Borno people are suffering.  The Federal Government, International NGOs and Local NGOs are trying to reach to remote places but they are still not accessible. One is not free to walk or travel at night.  I personally do not know how true the reports from media and government are but by hearing from the horse’s mouth we know that there are still places that are not fully liberated from the terrors.