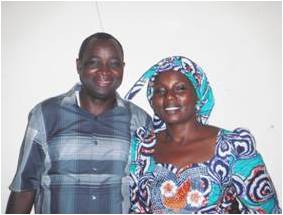 Markus Gamache is the Church of the Brethren (COB) Mission Coordinator in Nigeria.  He’s from a small village in northeast Nigeria called Wagga, very close to the Cameroon border and the Sambisa forest.  His wife Janada is also from a village in northeast Nigeria called Lassa.  Both places have been seriously impacted by the insurgency in Northeast Nigeria.  Wagga has been overrun by Boko Haram seven times while Lassa has also been overrun several times.  While some people are returning to Lassa today, no one has yet been able to return to Wagga.  Markus and Janada have five children.  Their two older children are away at boarding school, but the rest of their family is living with them in Jos, an area largely unaffected by the insurgency in Northeastern Nigeria.  But, this is their story of how the insurgency has affected the lives of people hosting refugees. 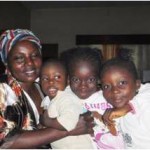 Janada and the younger children

until the numbers swelled to 60 people living in their home.  Can you imagine how to house 60 people in a home built for 5 or 6?  The home has a small office, 3 bedrooms, a living/dining room, kitchen, and laundry room.  In this case, they put all the men in one of the bedrooms and in the office.  Small children slept on the floor in Markus and Janada’s bedroom.  They reserved the living room and dining room for the women and other children.  They moved all their furniture against the walls, placing sleeping mats on the floor where people slept.  Janada tells me there wasn’t any place left on the floor for anyone else to sleep.  All sleeping space was taken.  They had 60 people sleeping in their house like this until earlier this year!

The refugees told them stories of how they were terrorized.  Many men were slaughtered (throats cut) with knives.  The Boko Haram didn’t want to shoot them.  They wanted to see blood flow.  To prepare for such slaughter, it’s believed that the Boko Haram take drugs that affect their minds.  It makes them indifferent to the cries of helpless people.  The Boko Haram told local Muslims they wouldn’t kill them or their families if they pointed out the Christians.  When they arrived in a village they shouted, “Allahu’akbar,” meaning “God Is Great”, then “Arna” meaning “Pagans” signaling their intent to kill Christians who they consider to be pagans.  Many of the refugees related this same story.  The refugees mourned the loss of relatives and friends and were also very sad about this betrayal by their Muslim neighbors. 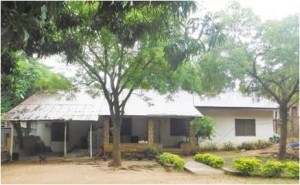 But back to the story — How can you take care of 60 people staying in your house?  Janada happens to have 1400 laying chickens.  Having eggs readily available helped tremendously.  The eggs provided protein and could be prepared in many different ways.  Nigerian daily meals ordinarily consist of two things.  “Tuwo” is the grain base for the meal.  It can be prepared from ground corn, ground maize, or semovita (a very fine tapioca).  Tuwo is prepared by slowly dropping the grain into boiling water until it forms a thick, heavy mass of grain and water.  This mass is divided up into balls that are about 4 inches in diameter.  The balls are each placed in a plastic wrap.  That is a single serving.  Another option is to cook rice instead of grain for the tuwo.  Then they prepare the “Miya”.  This is what provides the flavoring.  The flavor of the miya varies.  It is prepared with oil, leaves such as aleho (a form of spinach) yakwa, or bitterroot, Maggi cubes (bouillon), tomatoes, onions, and a small amount of some kind of protein like beef, goat, fish, or chicken.  To prepare enough miya alone, Janada tells me she spent 5500 Naira ($27.50) per day.  That did not include the protein she used in the miya.  Tuwo was prepared from the grain they harvested from last year’s crop.  Thankfully, Markus and Janada had a bountiful harvest last year. (They also received assistance though food districutions of EYN and CCEPI)

In Nigeria, it is a cultural expectation that you will take care of refugees coming to you in this type of situation.  Refugees know that they have a place to go to. 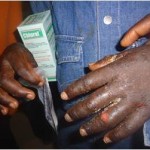 Many of these refugees had medical issues.  Some hiked for miles to escape.  They traveled heartbroken by the scenes of relatives and friends killed before them.  They frequently were starving, had no water to drink, slept in unsafe places, and were miserable.  Some suffered from snakebites and died on the way.  Others died of starvation.  Many had skin issues, foot and back aches, and lack of medications for problems like high blood pressure or diabetes.

Some problems that Markus and Janada faced were the poor attitudes of some of the refugees.  Some of them didn’t care for the food that was prepared and criticized its’ taste.  Markus and Janada’s children didn’t get as much attention as before.  Also their food wasn’t quite as healthy.  They were stretching their budget to care for so many people.

Some the good things that have resulted from taking in this enormous number of refugees are the feelings of satisfaction they got from being able to help so many of their family and friends.  All the refugees have been able to physically recover.  Two women who arrived pregnant were able to safely deliver their babies.  The children who got separated from their parents have found them and are living together.  Most of the men have been able to find jobs.

Most of the refugees have now relocated to places that have more room and are better for their situation.  But, God Bless such Hosts!  Markus and Janada are only one household among the great many who have provided a refuge for people who were able to escape.  They helped people to recover physically, but now the emotional recovery must continue.

4 thoughts on “The Hosts (by Janet Crago)”