Today is International Conscientious Objectors Day. A day established in recognition of the long and storied history of conscientious objectors across the world. The Church of the Brethren was founded and built by people of conscience and we celebrate our tradition of conscience with a story from Brethren young adult Michael Himlie. Michael has carefully considered his beliefs and we support him in his journey of conscience and faith. Michael shares his story below.

“The official position of the Church of the Brethren is that all war is sin and that we seek the right of conscientious objection to all war. We seek no special privileges from our government. What we seek for ourselves, we seek for all – the right of individual conscience.” 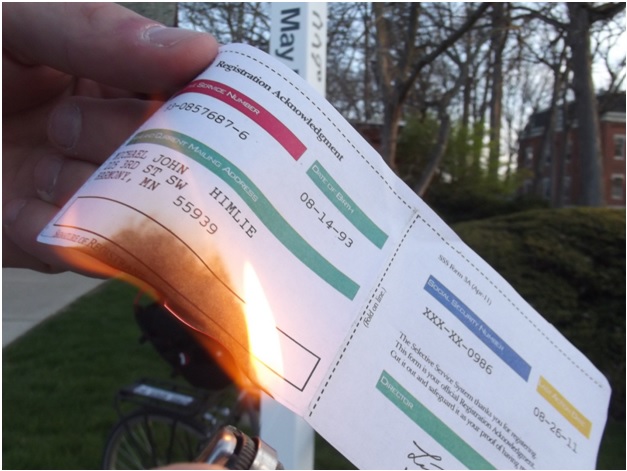 Hi everyone! Michael Himlie here! In early April, 2015 I decided to further my stance on war, and not only maintain my position as a conscientious objector (C/O), but also submit my draft card to the Selective Service System (SSS), personally considering myself “deregistered from the Selective Service System”. For those of you that are not as familiar with this, it is not possible to deregister, the SSS does not even file C/O claims during “peacetime”. When I sent in my draft card this is the letter that I sent with it:

To whom it may concern,

My name is Michael Himlie; I am from the Root River Church of the Brethren in the Northern Plains District. This letter explains my understanding of war, and because of my beliefs, why I cannot and will not promote the structural violence of the Armed Forces.

As a very young child I was taught that violence is wrong. Today I believe that every problem, threat, or issue can be resolved nonviolently, that war is a curable disease. The Church of the Brethren, the denomination to which I belong, is considered one of the three historic peace churches. In addition to being active in the denomination, my work with organizations such as Brethren Volunteer Service, Christian Peacemaker Teams, On Earth Peace, New Community Project, and more are further proof of my dedication to a non-conformist lifestyle. Furthermore, violence is simply not an option for me; peacemaking is the only way for me to get to where I wish to go. If I want to bring peace to this world I must first find peace within myself, which I cannot do if I belong to the Selective Service System.

A personal commitment and vocation of being a follower of Jesus does not allow for me to submit to a system of violence, where maiming human life is honored by millions. I will not. Being a follower of Jesus, I will not discriminate, I will love all. With this, I choose to submit my draft card (Selective Service System card) back to the United States of America, signifying that I am no longer a part of the Selective Service System. I will personally be following up, to make certain that my stances are understood and accepted.

After submitting this letter to the SSS I had received the following letter back from them with the enclosure of my draft card back to me.

This responds to your letter postmarked April 2nd expressing your objection to war and promotion of “the structural violence of the Armed forces.” Thus, you enclose your Registration Acknowledgment Card and contend that “I am no longer a part of the Selective Service System.” I am returning your card because there is no authorization under the Military Selective Service Act to remove any man who has registered validly.

Virtually all men in the United States ages 18 through 25 are required by law to be registered with the Selective Service System, even though there has not been a draft since 1973 and none is contemplated in the foreseeable future, and even though they consider themselves a conscientious objector (CO). Registration is both a legal and civic responsibility.

Under the Military Selective Service Act , classification as a conscientious objector (CO) can only be made by a Selective Service Local Board; there is no provision for a self-designation . Further, classifications would only take place if a draft were underway because presently there are no active draft boards in existence nor claims for CO status being considered. In fact, the last draft ended over 41 years ago. However, upon reinstatement of a draft, all individuals who receive a notice to report for induction have an opportunity at that time to file a claim for reclassification, postponement, or exemption, to include CO status . But this opportunity to claim CO status only applies to men who are in our database, are called, and file the claim. Our boards are made up of individual volunteers who are nominated by the State Governor and appointed by the Director of Selective Service on behalf of the President. These uncompensated civilian men and women are from the area covered by the board and are reflective ethnically of the geographic region they serve. The document which describes all claims and the procedures to file for each, our Information for Registrants booklet, can be found at under publications and then under registration materials. Thank you for your observations.

The SSS had returned my draft card to me, assuring me that it is impossible to deregister from the SSS. I feel that it is only right that I send my draft card back to the SSS, encouraging them that they had made a mistake. That I really do not want my card and that I no longer need it, as I consider myself deregistered from the SSS. While this is my personal decision, I have been blessed with the support of On Earth Peace, the Office of Public Witness of the Church of the Brethren, and Dunker Punks Inc. 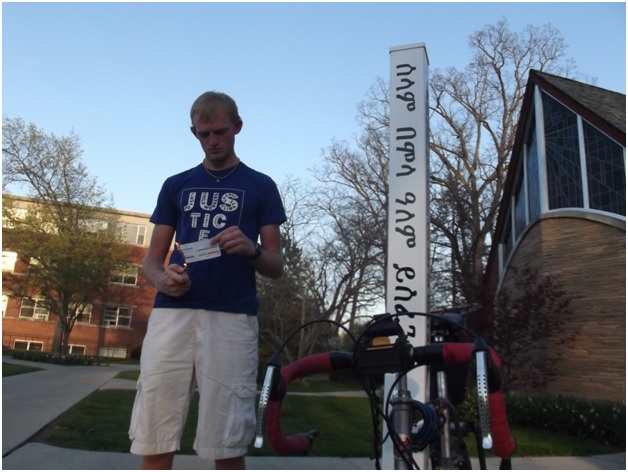 These actions will most likely never change how the Selective Service System works, but rather is to be more oriented towards building community among Brethren and friends who would like to join the movement in sending our draft cards in unity. I would also like to widen our community to those not submitted to the SSS, like women and those under 18 years of age, but would like to stand in solidarity with the Send It Back community. What I am asking is for you to consider sending you draft card back with me, increasing the number of cards sent in unity, every time the SSS sends our cards back to us, as they had sent mine back to me.

Above you can see a picture of my draft card, and yours probably looks similar. I would encourage and challenge all of you to consider how you can stand in solidarity with this project. I would encourage you even more to consider being in touch, sending in our draft cards together, assuring the SSS that we will not be silent, and we will not submit to a deeply rooted systemically violent practice. If you would like to learn more, and/or join the Send It Back community, please contact Michael Himlie at mjhimlie_23@hotmail.com or 507-429-4243. with it: https://mjhimlie23.wordpress.com/…/submission-of-draft-car…/ Today I received this letter back from the SSS: https://mjhimlie23.wordpress.com/…/selective-service-syste…/

With much peace and love,