Stepping off Pennsylvania Avenue for lunch, we opened the door as the smell of tomato sauce and bubbly cheese streamed out into the December cold. It was my first time eating at We the Pizza, one of the many aptly-named DC eateries, and while the rich ricotta on my slice of Greek pizza did not disappoint, my new pastor friends from Philadelphia truly made the experience memorable. After ordering two hearty slices of pepperoni, Pastor Keith from the Church of the Overcomer led our merry band of advocates to a booth protected by a six-foot-tall picture of Jimi Hendrix.

Though they just met the day before, Pastor Keith, Pastor Billy, and Ph.D. candidate Drew Hart carried on like old friends. Laughter erupted between greasy bites of pizza as the three of them shared stories about their work and ministry. Invited by the Interfaith Criminal Justice Coalition, of which the Office of Public Witness is a member, Pastor Keith, Pastor Billy, and Drew were in DC for a national lobby day advocating for sentencing reform in the criminal justice system. Faith leaders from over 20 states attended, and I had the privilege of escorting the Pennsylvania delegation. After visiting with Representatives Fattah and Meehan and Senator Casey, the chance for fellowship and good food was more than welcome.

But the seriousness of the day was not lost on them as we ate. Drew, who has written and spoken passionately about the problems of racism in Christian theology and mass incarceration, often punctuated the conversation with thoughtful insights about power and privilege. Pastor Billy, whose ministry involves helping persons overcome drug addiction, spoke about a member of his church who was recently released. “He went to prison for nearly half of his adult life just for doing drugs,” he said. “After his ‘long vacation,’ as he calls it, he put a lot of effort into staying clean and tried to spend time with his father.

“He was doing really great,” Pastor Billy said with a smile. “But then just like that, his father got cancer and died. He couldn’t cope and started hanging around with a crack addict. He’s back in there now.” All of them have heard too many stories like that one. Two members of Drew’s family have spent time in prison, and Pastor Keith runs a community house to help reintegrate ex-prisoners.

“It’s just hard,” Pastor Billy says. “He really is a good man. He had the keys to the church and could have gone in and been like, ‘All of that’s worth about $3000 right there.’ But he didn’t. And now he’s back in prison and they are trying to decide if this is his third strike. It’s crazy. The real problem is drugs, but it’s hard because the resources aren’t there to help him.” 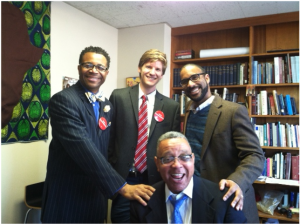 I have written about mass incarceration and the racial disparity in our prison system, but stories like these really show the need for sentencing reform. Because of long mandatory sentences and unfair three strike laws, drug use has been over-criminalized to the point that half of all prisoners in US prisons are nonviolent drug offenders. These persons are not dangerous threats to society, but rather are victims of drug addiction. The US spent $60 billion on prisoners in 2012, but the way this money is being used is wasteful and single-mindedly punitive. If more of that money was used on drug rehabilitation and not on incarcerating so many nonviolent offenders, we could curb the problem of growing prison populations while doing a better job at preserving human dignity.

These were the big goals for the four of us in that pizza shop. The Sentencing Reform and Corrections Act that we lobbied for on Thursday makes strides in the right direction. It reduces enhanced mandatory minimums for drug felons and gives judges more discretion when sentencing low level drug offenders. It also makes the reduced mandatory minimums of Fair Sentencing Act retroactive. Significant to Pastor Billy’s story, the SRCA offers anti-recidivism programming to inmates to help them qualify for early release. While many of the previsions in this bill are good, there are many steps left to take for a true overhaul of our criminal justice system.

Jimi Hendrix famously said, “Knowledge speaks, but wisdom listens.” With Brother Jimi watching over the table, these three advocates found wisdom by listening to each others’ stories, forming bonds worthy of their City of Brotherly Love. With our pizza finished, we left the now-hallowed halls of We the Pizza, braved the breezy afternoon chill, and ventured towards our final Hill visit, hoping one more soul could find wisdom in their words.