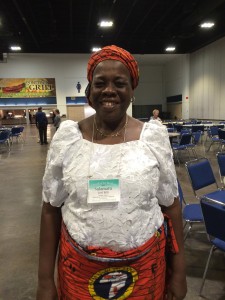 It was a Sunday morning that won’t ever be forgotten. During worship services at Salamatu’s large EYN (Ekklisiyar Yan’uwa a Nigeria which means Church of the Brethren in Nigeria) church, Boko Haram terrorists invaded the church building and started shooting people!  There was a tremendous rush by everyone to get out and away.   In the haste to leave, no one knows for sure how many died, how many were injured, and how many escaped.  Months later, relatives are still just connecting with other family members.

Salamatu fled with only her Bible and a copy of the SS&S (Sacred Songs and Solos).  Her group of escapees tried to go south to Uba, but that road was blocked.  They then headed through the bush to another nearby village, a distance of 8 miles.  They had no food or water, but had to push through if they wanted to live.  Eventually, they had to cross a river, and  they took turns crossing in a canoe.  The charge was $100 Naira ($.50), but luckily some people had a bit of money.  They all shared resources and were able to cross.  Salamatu sprained her ankle scrambling up from the river so she had to walk on a painful ankle the rest of the way..

This exhausted group arrived in the nearby village early the next morning.  This village has several large EYN churches and those churches were opened for people to sleep in.  Also, some people opened their homes for the refugees.  Many women cooked, so their immediate hunger needs were met.  However, This village was only a temporary refuge.  Someone located a pickup truck. That night, after about only 20 hours in the village, 40 people stood in the back of the pickup truck for their ride to Yola.  It was a very long, exhausting night riding 120 miles, standing in an overloaded pickup.  They were very frightened.  Prudent people don’t travel on the roads at night in Nigeria, let alone with Boko Haram lurking around.

When they arrived in Yola, Salamatu’s 12 year old son burst into tears and said he would never return to their village.  In Yola today, there are 6 EYN churches and several refugee camps.  The refugees dispersed to friends, family, or to the refugee camps.  Salamatu and family were taken in by a “brother in Christ”.  He hosted them for 1 month.

Then, Salamatu’s brother-in-law loaned them a small house in a suburb of Abuja, the capital city of Nigeria located just southwest of the center of the country.  They stayed in the house for 7 months.  At that time they could finally return to their village, only to find everything in their house burned, destroyed, or carted off.  Even their mattresses were missing!  Salamatu and her husband had each left a vehicle behind – they were gone.  One assistant pastor had a vehicle – it was gone.  The church had a bus – it was gone.  Both assistant pastors’ houses were burned.  The church was destroyed.  Life in their village is quite difficult now.  They must walk everywhere.  There is no electricity.

Salamatu had left behind a small shop in which she sold women’s wear, children’s wear, Bibles, and Song books.  The shop was destroyed along with all the goods in it.  Her plan was to use the profit from the shop to pay for school fees for her children.  She had saved money for some time to accumulate enough funds to get the shop started.  Now she has to start all over again, but has no start-up money.  They consider themselves very fortunate to have escaped.  Their four children are all back in school.  But Salamatu worries that they won’t be able keep them there because of her inability to pay the school fees.  Their village still isn’t really safe from Boko Haram.  So, Why did they go back?  To quote Salamatu, “If the shepherd runs away, who will take care of the sheep?”  After all, her husband Joel is an EYN pastor.

Today the Boko Haram prowl the bush around their village.  Those living there exist in a constant state of tension – to stay or to flee.  Would we, faced with this ongoing reality, find the faith to stay and be there to minister to those who return helping to restore some sense of normalcy to their lives?  Let this be a challenge to us all. We pray that Christ’s peace and presence will abide with them all. 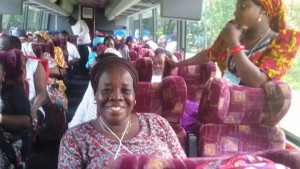 3 thoughts on “A Minister’s Wife tells her story”