A little over a week ago I went south to Raleigh, North Carolina for the National Farm Worker Ministry’s board meeting. While my primary objective was to participate in the meetings and activities of the board I did manage to wander the streets of Raleigh the evening before and try out some Carolina BBQ. Today I want to spend some time telling what I saw and reflecting on this in light of the scripture passages we read earlier. 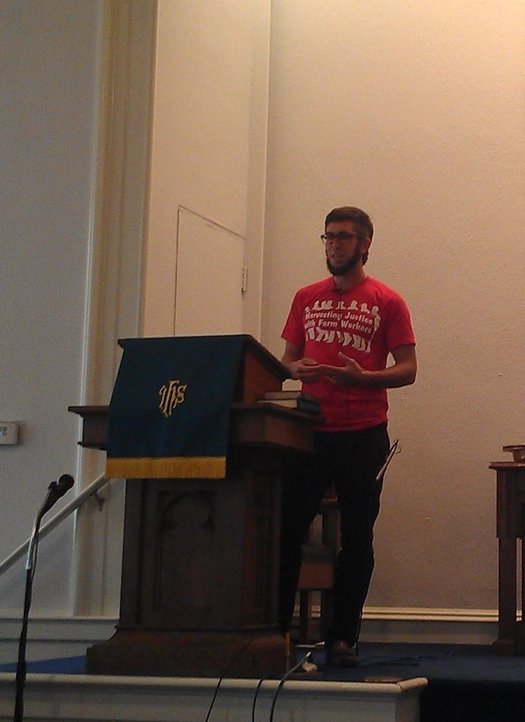 “Look to the rock from which you were hewn. Look to Abraham your father”

The prophet is calling the people to remember where they came from—to remember that God had delivered them and called them to righteousness and justice. This “remember” reminded me of being in middle school or high school, particularly early on when going out on my own was a newer experience. My parents, rather than listing specific rules that might include things like—“no driving stupidly even though you imagine yourself invincible” or “don’t drink,” they said something to the effect of “remember who you are.” A list of rules would have been tedious and likely not particularly effective. But by saying “remember who you are” they included the entirety of what they had taught and shown during my growing up.

The prophet is calling the people to remember where they came from. To remember they are a people of righteousness and justice and that God delivered them from slavery.

Two days after I arrived home from the National Farm Worker Ministry board meeting I was on a plane to Chicago in order to participate in Church of the Brethren staff meetings in Elgin. Like a good board member I had purchased a NFWM T-Shirt and was wearing it for my day of travel. I had a window seat and was the first person on in my three seat row. While sitting there, looking out the window, and not planning on talking to anyone I suddenly heard—“Oh, we get to sit with the National Farm Worker Ministry.” I looked up to see two women who at first I thought may be Catholic sisters (there are a lot of Catholics in farm worker organizing—and a number of representatives of Catholic women’s orders—nuns—on the NFWM board). It turns out that they were Episcopalian and were professors at Virginia Theological Seminary. It also turns out that they had done work with NFWM quite a long time ago but hadn’t heard much from them for many years.

Now I am in no way implying that they deserted good work and were being unfaithful but my bright red t-shirt that read—“Justice for Farm Workers” reminded them of their past. It reminded them of this particular fight for justice. For these friends, even though they hadn’t been connected with NFWM they had still been concerned and active in struggles for justice, caring for neighbor and the earth. This was not the case for the Israelites. For the Israelites the Prophet is calling them to a radical change back to the way of God. Isaiah calls them to remember who they are–a delivered people—a people of justice and righteousness. Remember where you came from.

While Isaiah in general as a book focuses on Israel’s vocation of justice, righteousness, and relationship to God these few verses specifically remind of several things: where they came from, that the Lord will comfort, that justice will go out in teaching as a light to the nations, and deliverance is coming. This passage focus on these three—where they came from, the salvation of the Lord and (very briefly) that this entails justice. Isaiah reminds us of this as well—we are a people delivered—saved—and called to justice.

On the first day of the meeting we went to visit farm workers. Specifically we visited and listened to farm worker organizers from FLOC (Farm Labor Organizing Campaign) and then to labor camps. The founder of FLOC, Baldemar Velasquez spoke to us of his early years of working in the fields and how he came to do this work, which started many decades ago. He started in the fields at age six and organized his first strike at age 12. As migrant farm workers his family moved with the seasons. One year the farmer offered to keep his father on to do handyman work during the winter. Since there weren’t crops to pick Baldemar was able to go to school. He said that the small house the family lived in was so poorly insulated and cold he didn’t need prodding to go to the well heated school.

One of the challenges that farm workers face is that often there are no pay stubs or records of how much they worked and what their pay is. They simply get an envelope with money and have no way of assuring that they are getting paid what they are supposed to. (This pay is also quite low so every bit earned is critical). This is how Baldemar’s father was paid. On one particular occasion he was certain that his envelope didn’t contain all that was owed him. Though he knew it risky, he desperately needed the money, so he decided to ask his supervisor about it. When he did this the man verbally abused him. Young Baldemar was witness to this. It was at this time that he began to question this system. He then told us of successful campaigns in the past, and he told of what they are working on now.

Later in the day we broke up into 3 different groups and visited several labor camps. Sometimes these camps are official but meager structures provided by the farm, sometimes they are unofficial actual camps, and sometimes it is a room or trailer that the workers need to pay rent for. One such trailer visited by a board member on another trip was dilapidated, crowded, and cost each worker $50 a week –which when calculated cost more than the board members child was paying for an apartment in New York City. My group visited two camps.

We went to see—but how do we see?

I appeal to you therefore, brothers and sisters, by the mercies of God, to present your bodies as a living sacrifice, holy and acceptable to God, which is your spiritual worship. 2 Do not be conformed to this world,[c] but be transformed by the renewing of your minds, so that you may discern what is the will of God—what is good and acceptable and perfect.–Romans 12:1-2

Chapter 12 follows Paul’s describing the Gentile readers’ being grafted into the vine of the family of God. This chapter and these verses are the result of this new relationship and connection to God. “by the mercies of God—to present your bodies as a living sacrifice, holy and acceptable to God, which is your spiritual worship.” Note the elements of this. Bodies are presented to God for spiritual worship. While this may feel repetitious it is critical that we keep before us that “spiritual” and “material” are not separated. How we live is not separate from how we worship. Being a Christian, a follower of Jesus, cannot be distilled down to “being a good person” or “worshipping God with a pure heart.”

The passage continues, 2 “Do not be conformed to this world,but be transformed by the renewing of your minds, so that you may discern what is the will of God—what is good and acceptable and perfect.” Don’t be conformed but transformed. Don’t be stuffed into the world’s mold but be changed into something new. This being conformed indicates a restriction. A restriction in how we live, relate to others, see, and hear. One risk of this “world” language is that at times Christians have set a hard barrier between themselves and the “world” which is seen to be corrupt. I would like to make a slight distinction in how I believe the Bible uses “world” and some of the ways we might understand this. The Psalms, for example, celebrate many things in the world. That is they celebrate creation but also celebrate food and relationships. These things certainly can be over celebrated, abused, or worshiped but are in and of themselves beautiful and part of God’s good gifts. There is another, darker, understanding of world that I believe this passage is responding to. It is, for example, the system and habits of greed which place our own selves above others, above God, and above God’s creation. The old Brethren sought to distance themselves from this world by a variety of practices of non-conformity. One small thing was that men did not have mustaches because elaborate mustaches were signs of vanity and were also associated with the military. We also had unadorned churches—which were called meeting houses—so that we would focus on God and not seek to look good.

During a time of reflecting on our experiences meeting farm workers and organizers the day before, a question mark arose. Most of these workers had gone to great lengths to get here and many have stayed for many years. While there have been cases of virtual or actual slavery, in Florida, for example, this is not exactly what we found. My group spoke with a man from Haiti who has been picking tobacco for 34 years. This despite the sickness people often feel from absorbing significant nicotine from handling the tobacco. Another worker we met is soon turning 28 and has been here for 9 years. When he described his home in Mexico with abundant fruits we asked why he stayed. He said he has friends and its “quiet”—that he liked it.  When he brought out a large bucket which holds 32 lbs of jalapeño peppers we asked how long it took to pick—15 minutes. And how much do you make from it?–$1, so that’s $4 an hour. There were probably hundreds of peppers in this large bucket. His fingers were blistered from the repetition of picking for 11-12 hours.

Though these conditions were obviously bad some of the group began to wonder why, if people keep coming and seem content, why do we do what we do? While some noted that this situation was complex, David of the United Methodists urged us not to call it complexity. Call it what it is—a system of greed. “Complexity” gives the impression of moral ambiguity. This is a system of greed and my desire for cheap food is a cause.

One of the participants was a visitor to the board meeting. She is a seminary student interested in food and environmental justice who the director invited to join us. She was in my group and met the jalapeño picking fellow. When we reflected as a group on this experience she spoke and was obviously moved. She said, “For several years I worked in a grocery store. I unloaded boxes of peppers from a particular farm. I saw those boxes at the farm today. (paraphrase)” These boxes were no longer just boxes filled somewhere somehow. They were filled by Sergio. Her vision was transformed.

Now this is not a call to paralyzing guilt but it is a call to attend to the transforming of our vision–to our total transformation. When our seeing is transformed—unsurprisingly, we see differently. How do we see? Who do we see?

Do we see Jesus?

“2 Do not be conformed to this world, but be transformed by the renewing of your minds, so that you may discern what is the will of God—what is good and acceptable and perfect.”