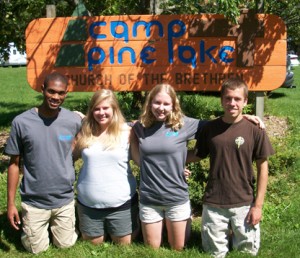 It was exciting to come back together again after our mid-summer break. It was good to reunite as a group, be back in a camp setting, and get back into our summer’s work. We just finished a great week at Camp Pine Lake in Iowa! We spent the week with about 30 energetic Junior High campers. This was our first Junior High camp of the summer, which presented new challenges as well as joys.

Our first responsibility of the week was to welcome the campers with get-to-know-you games and icebreakers. One of the activities we led was the “Blanket Game,” where campers split into two teams, each on one side of a blanket. Each team sends one camper forward, the blanket is dropped, and campers must shout the other camper’s name first. The camper who calls out second must move to the other team. It was a great way to learn names and build relationships. Another responsibility of ours was to lead Morning Watch every morning, introducing the daily theme of how to “Be a Hero: Live like Jesus.”

We were also responsible for the large group session each morning, which we used to teach peace, using our framework for the summer (see Peaceful Pines blog for more explanation). Campers responded with much enthusiasm by sharing their thoughts and ideas about peacemaking. One of our sessions was meant to show the effects of marginalization and how to include others. We used the story of the Woman at the Well found in John 4 to illustrate how Jesus calls us to accept others. We played a game in which campers were assigned shapes and told to form groups without talking. Three campers were assigned shapes that did not have a group: they were the marginalized people. The game opened up conversation about how we can include others in our daily lives, in our schools, in our churches, and in our communities.

Another responsibility we had was to help cabin groups plan evening campfire. We led campfire the first night to serve as an example. The following days, we facilitated planning sessions with campers, which included scripture, singing, and skits. The campers were creative and it was rewarding to see them lead campfire.

The week was full of fun activities, such as swimming, hiking, canoeing, fishing, slip-n-slidin’, going to a waterpark, playing water balloon games, and a skit night. One of our favorite activities was the opportunity to cool off on a homemade slip-n-slide, made out of a huge piece of plastic, laid down a hill that was lathered in dish soap and freezing cold water. We also got to fire a giant water balloon sling shot. Everyone loved it! The last evening included an entertaining skit night. Campers were given opportunities to perform with their cabin, individually, or in groups. They were creative and it was a fun event! We ended the skit night by “pranking” the camp manager, which the campers thought was hilarious.

Thanks Camp Pine Lake for a great week! Now we’re off to attend National Youth Conference in Colorado!