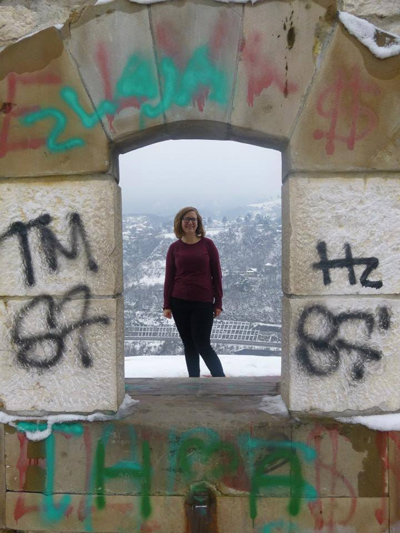 As I have now been in Europe for a while, I have noticed quite a few differences. I do not feel like a typical American; in fact I am in the minority when I claim my pacifism beliefs and my worries about politics in the U.S. However, it is when I am far from the U.S. when I realize just how American I am. And so here we go, five ways you can tell I am an American.

1) The most obvious one is when I open my mouth. My Croatian is still very rough and I most often speak in English. And my English is obviously American. People will ask me where I am from and I answer the United States and they always give me the “duh, I know that,” look, followed by “which state?”

2) The second obvious way to tell I am American is that I am not afraid of going outside with wet hair or flats without socks, even in the winter. I should first say, when I do these things in the winter, I am walking perhaps 100 feet outside from my dorm to the library. I know I will only be outside a few seconds and thus I am not worried about getting sick. However, Croatians look at me like I am crazy! Croatians, like a lot of Europeans, believe that by going outside with wet hair or not wearing enough clothes, you will get sick! And I think this is true of them. I believe that if you are worried or think you will get sick, you are more likely to do so. However, I just laugh it off and tell people I am American and thus will not get sick. I doubt that I will ever wear as many layers or as heavy coats as Croatians… that just seems hot!

3) I think a lot about getting things done and being as productive as possible. This does not mean that I act in ways that are productive all of the time, but I feel like all my time should be spent doing things. Croatia is a relationship culture, meaning that spending time with people is more important than production. People regularly sit in coffee shops for hours over one drink just catching up with friends. They are not worried about what they have to do next or the fact that they are getting nothing “accomplished” during this time. Even in the work environment, I don’t see people as stressed as in America. Even though people want to get work done and done well, people still realize the value of genuine conversation and relationships. I admire this part of the culture so much and am trying hard to calm down and focus more on the relationships in my own life than worry about how productive I am being or should be.

4) I try to be as polite in any situation. I am not saying that Croatians are rude, but they can be blunt and they don’t believe in fake smiles. I was talking with one of my Croatian friends and she complained to me about the American fake smile, the one we give when we believe the other person is wrong, but we think it would be rude to say our opinion out loud. She hates this smile because you can see from a mile away that it is insincere. As an American, I have been trained to use this smile, believing that it is more important to be polite than sincere. Now, I see the problem with this. I am trying harder to not give this smile and more sincere. I don’t know think I will ever get rid of my extreme politeness, but I believe that Croatians are right not to beat around the bush and say things the way they are.

5) I do not use a multitude of emoticons. I am not saying this is a bad thing, but I have noticed when I receive a message from a Croatian friends, there are smiley faces after almost every sentence. In the U.S. we might use one smiley face every once in a while, but not nearly to the extreme that my non-American friends do. I asked a Croatian friend about this and she answered that they just want their writing to be more pretty. I respect that. And I have tried to use more just so I do not appear rude.