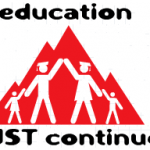 Education for children in Northeast Nigeria has suffered immensely. Here is a description of the problems from an article in International Business Times.

Destroying Nigeria’s Children – Before Boko Haram launched its brutal insurgency in northeast Nigeria six years ago, the region recorded the lowest school enrollment rate in the country, especially for girls, as well as the lowest level of literacy and highest incidence of poverty. The insurgency has exacerbated the situation. Over half a million children in northeast Nigeria have had to flee to safety in the past five months, bringing the total number of displaced children in the conflict-torn region to 1.4 million, the United Nations said in September. More than 208,000 of them are not in school.

But the NGO, Education Must Continue Initiative, refuses to let these statistics stand. They are working hard to get the children back in schools. Here are some pictures(by Jay Wittmeyer and Roy Winter) from a recent visit to one of their temporary school in Yola. 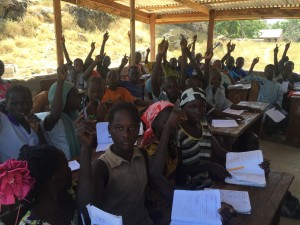 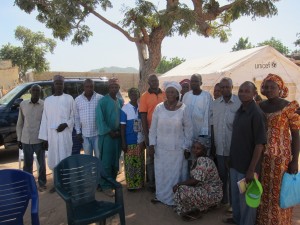 Teachers at the Yola temporary school 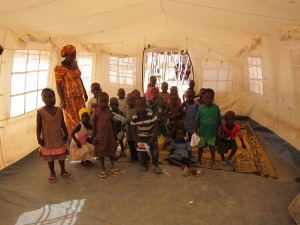 School in a tent donated by Unicef 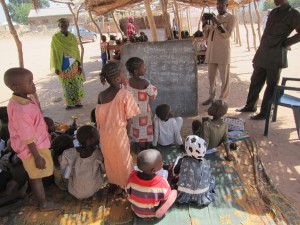 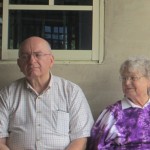 It seems that many of the displaced families who are staying in the Gurku resettlement camp were desperate to find educational opportunities for their children. Stretched financially, they heard of several private schools near Benin in Edo State that were offering free tuition and board for the IDP’s (Internally Displaced Persons) from Northeastern Nigeria.  So, many of them sent their children, many Secondary School age boys and girls, to Edo State to continue their education.

Then, last week an incident occurred which caused considerable alarm.  A group of about 40 buses showed up at one of these private schools, announcing that the children were being relocated to another place.  The school Principal, not understanding this move, called Nigerian security authorities who intervened to stop the movement.  It seems there was no official documentation for authorizing such a move, and those attempting to remove the children have been arrested.  It remains unclear, as I write this short note, whether this was an elaborate attempt to sell these children into household and/or sexual slavery, or possibly even an attempt by Boko Haram to carry out yet another mass abduction. It seems that Benin is known here in Nigeria as a “hotspot” for movement of children into the sex slave trade. Many children end up as slaves in Middle Eastern households, or as sex workers in Europe, and even occasionally in America. We plan to follow up on this incident as the investigation continues. 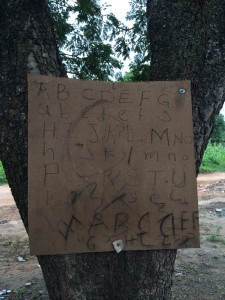 Classes for younger students are held under this tree

But — getting back to the Sunday worship attendance figures — about a dozen fathers had traveled that Sunday from Gurku to Benin to retrieve their children, and bring them back to the camp.  The incident, and the desperation we see in this attempt by parents to continue the education of their children in spite of the risks, points to just one problem facing the many thousands of IDP’s from the EYN (or Church of the Brethren, in English). One EYN leader has estimated that more than a thousand children may have been relocated to Delta and Edo states — many to further their education! 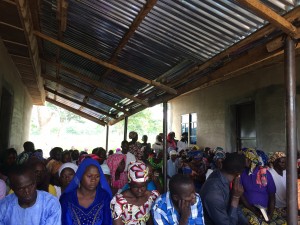 The Gurku camp we were visiting is a new development, and has no school, either primary or secondary, associated with it.  All of EYN’s resettlement camps face similar problems (Jalingo, Jos and Masaka are all being developed, and another is planned in Yola).  EYN’s Comprehensive Secondary School and Kulp Bible College are located in Kwarhi, in an area over-run by the Boko Haram last year, and they have not been open for most of the past year. Ultimately, another Secondary School is planned for Chinka on a large parcel of land owned by EYN, located between Abuja and Kaduna, but it is still under development.  But, there is clearly an immediate need for more safe schooling opportunities in the EYN, and the insurgency and refugee situation has only made a stretched EYN educational system even worse.

Our hopes and prayers, of course, are focused on EYN finding safe alternatives and solutions for these children, who may be faced with the rhetorical – and diabolical – choice of “sitting in the frying pan, or jumping into the fire”, as they struggle to continue their schooling.  Pray, with us, that safe solutions can be found, that schools can be set up in the resettlement camps, and that educating this next generation of children will continue safely.