The Russia-U.S. relationship has become increasingly complicated over the past few years. The Syrian conflict has attracted both U.S. and Russian involvement, becoming a proxy war between several international actors. Accusations of cyber- and information warfare between the nations persist, and complex questions of global leadership have arisen.

The tensions should concern all who seek international peace. In one recent example of conflict, the United States shot down a Syrian warplane. In response, the Russians suspended the use of a military communication program that helped to prevent accidental in-air collisions in Syrian airspace. They also threatened to shoot down any U.S. plane that traveled west of the Euphrates River.

The dissolution of communications structures like these, combined with military action and general posturing on the part of each national actor, does not bode well for regional or international security.

When suspicion clouds the relationship between nations, it is often difficult to see past our national allegiances and fear. However, peacebuilding requires us to build relationships where others only see conflict. 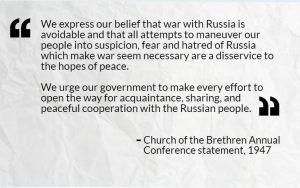 Quote from 1947 Annual Conference statement on Russia, referenced in the Brethren Encyclopedia.

As part of this work, the Church of the Brethren participated in two cultural exchanges in 1963 and 1967. While in the United States, Russian church leaders ate, talked, and joked with their American hosts, and were especially interested in visiting with the youth. Their American counterparts, while visiting Russia, were fascinated by the unfamiliar political ideology and relationship between the Church and State. 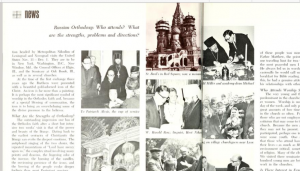 A 1967 Messenger article on the cultural exchange

At these meetings, delegates were able to experience each other’s culture, learn about their religious beliefs and structures, and gain new perspectives on the other nation. These were not meant to be high-level religious or political discussions- rather, they were meetings of Christians from different countries, earnestly seeking to understand one another and forge a peaceful future.

The work done by the Church of the Brethren during this era is strikingly relevant to modern interfaith connections in U.S. and Russia. The same general distrust and military posturing that occurred during the Cold War has resurfaced in more modern contexts. As the political rhetoric once again heats up, it is essential that the faith community works to discern its role in the U.S.- Russia relationship.

There are many relational and advocacy opportunities for churches, including the Church of the Brethren, to work towards greater interpersonal understanding and large-scale investment in peace. Like the leaders of the Church of the Brethren during the Cold War, we can, and should, use our faith commitments as a powerful platform for international dialogue and peacebuilding work.

While we recognize that there are many ways in which the current tensions are different from Cold War tensions, we believe that it is important to adapt the Church of the Brethren’s historic peacebuilding mindset to the modern context. At the Office of Public Witness, we hope to continue the Brethren legacy of peacebuilding in this region, and will be working to discern our role in the relationship over the next few months.

A huge thanks to the staff at Brethren Archives for their research assistance!

Interested in reading more about these cultural exchanges? Check out these Messenger articles: