By Nathan Hosler, Director of the Office of Public Witness 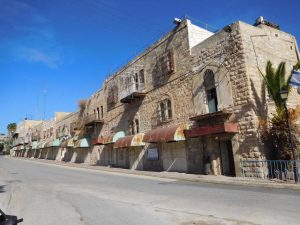 Writing this, I was sitting on the Mount of Beatitudes overlooking the Sea of Galilee. Below me, closer to the water, on my left and right are spots that mark many significant points in Jesus’ ministry. The ancient village of Capernaum, a chapel marking the Primacy of Peter, and a chapel with the famous mosaic of two fishes and five loaves from the year 480- marking the spot where Jesus multiplied these meager foods and fed the crowds. In Capernaum there is a house that then became the site of a church in 5th century. The house is thought to be that of the mother-in-law of Peter where Jesus would stay and where the mother was healed. It was also the site of one of the earliest house churches. Maybe 50 yards away there is the remains of a synagogue for the Byzantine period. This synagogue is built with stone imported from Jerusalem but built on an earlier foundation of local basalt stone—Some archaeologists assert that this earlier synagogue is from the time of Jesus. 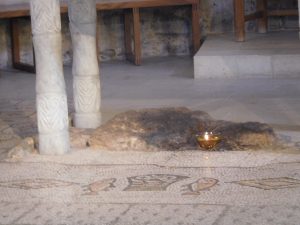 A mosaic of the two fishes and five loaves. Photo Credit: Nathan Hosler 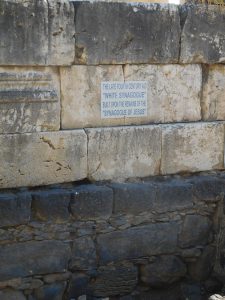 To my left (to the north) 20 miles is Syria whose civil war and refugee crisis require no introduction. Back south is the West Bank of the Palestinian territories. Most of the week to this point has been hearing from an assortment of political, religious, NGO, and peacebuilding workers struggling in a situation of conflict that feels rather intractable. The significance of the land both present and past is of incomparable magnitude.

Along the way I have been reading and meditating on our passage in James.

13 Come now, you who say, “Today or tomorrow we will go to such and such a town and spend a year there, doing business and making money.” 14 Yet you do not even know what tomorrow will bring. What is your life? For you are a mist that appears for a little while and then vanishes. 15 Instead you ought to say, “If the Lord wishes, we will live and do this or that.” 16 As it is, you boast in your arrogance; all such boasting is evil. 17 Anyone, then, who knows the right thing to do and fails to do it, commits sin.

Narrowly, this and the following verses are about wealth. I think, however, that money stands in for the assumption that we are in control or our desire to be in control. Though God (and the world with its histories and cultures) are big, you are misty—mist-like, ephemeral. This assertion is not negative, not an insult, it is simply honest. Though those of us who are at least relatively well-off may forget this, our lives are indeed contingent. Our lives are dependent. They are based in God. James addresses the one who confidently says they will do this or that. The hearers of the letter of James were likely not the well off—or the overly wealthy. So, it may not be that this or the next portion are as directly applicable to the immediate crowd. The general assertion, however, is very applicable, hence its inclusion. To those who are well confident that their plans will succeed, James asserts—you are mist—misty—mist-like in the fleeting quality of your life. Because you cannot know what will happen you should always acknowledge that even the best laid plans rest in God. The habit and practice that James exhorts is to, in all things, acknowledge that one’s life is held in God.

Your existence is in God.

As I’ve been reading James I have also been thinking about a similar passage in the Sermon on the Mount. Given my writing location if felt particularly relevant to note this. In the sixth chapter of Matthew, Jesus teaches: Why worry about your life?—about what you will eat or drink or wear. Are not the flowers of the field more splendid than Solomon, the most extravagantly dressed of all kings? 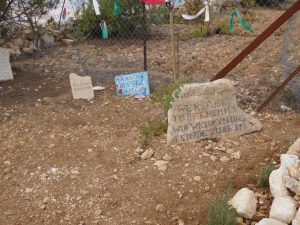 A sign outside the Tent of Nations that reads, “We refuse to be enemies.” Photo credit: Nathan Hosler

The sign by the entrance says, “We refuse to be enemies.” The Tent of Nations (http://www.tentofnations.org/ ) is a Palestinian farm on a hill top in area C. Area C is part of the West Bank, the land of the future Palestinian State. It is also the site of many settlements, which are illegal under international law, undermining the possibility of a future state, and more like towns or cities than anything makeshift that is indicated by the term “settlement.” To get to the Tent of Nations we left our van and climbed over boulders that have been placed on their road a few hundred meters from their farm in order to impede access. The farm is on a hill top. Every other hill top surrounding has a massive settlement.

We met with Daoud Nasser whose family has lived there for generations. Unlike most Palestinians whose land is at risk they have a clear line of documentation of land ownership going back to the Ottoman Period in the early 1900s. Since the land is documented but still deemed very desirable, they have been fighting in courts since the early 1990s. The case keeps getting passed back and forth between the Supreme Court and Military courts. They must keep fighting and filing because if they don’t they will be forced out. They can’t build any new structures and the structures they have—even the tent like structures—have demolition orders on them. Daoud Nasser, though, seems to be full of joy. He told of their struggle just to keep their family’s land. He demonstrates a trust in God and in others to continue on.

Again, your existence is in God. You are mist-like but God is steadfast.

Unsurprisingly, the rich also have this problem. They also easily forget that their existence is in God.

Come now, you rich people, weep and wail for the miseries that are coming to you. 2 Your riches have rotted, and your clothes are moth-eaten. 3 Your gold and silver have rusted, and their rust will be evidence against you, and it will eat your flesh like fire. You have laid up treasure for the last days. 4 Listen! The wages of the laborers who mowed your fields, which you kept back by fraud, cry out, and the cries of the harvesters have reached the ears of the Lord of hosts. 5 You have lived on the earth in luxury and in pleasure; you have fattened your hearts in a day of slaughter. 6 You have condemned and murdered the righteous one, who does not resist you.

James doesn’t discuss if there are righteous ways to be rich. Certainly, our congregation isn’t rich compared to much of Capitol Hill. Because of this and certain prophetic inclinations we may find it easy to speak critically—to speak “prophetically.” However, though we are not that rich we are comparatively rich in relation to much of the world. And as such may be indicted.

The rich people that James addresses have built their riches on the backs of others. For white America the legacy of slavery of Africans and genocide of Indigenous communities is a clear example. But also, immigration, trade, and foreign policy often continue this pattern.

What we don’t know is if James has certain rich folks in mind or assumes that all those who are rich have earned it through injustice. It is also unclear if the “rich” are those who meet a certain income bracket (which seems unlikely) or if it is short-hand for those in power. This call is a call to repentance. It is a call towards being rightly oriented toward God and others. The call to repentance and to acknowledging that one’s existence is based in God rather than in one’s own might or smarts or good looks or cunning is not against but for the one being challenged. Only when you care about that person or entity can you fully embrace the uncomfortable confrontation. Repenting of this is in the interest of both the oppressor and the oppressed.

Let’s suppose that riches and power are somewhat interchangeable. During the past two weeks the question of power and who is criticized in what manner has been close at hand for me. For Palestinians living under Israeli occupation the restricted rights, living under military law, limited ability to move freely, and lagging infrastructure is clearly unjust. For many Israelis their existence as a small country surrounded by the much bigger and often hostile Arab world, history of the Holocaust, and repeated abuses throughout history lead to a strong emphasis on “security” at any cost. Many wars in the past decades as well as an enforced separation which does not allow interaction with Palestinians in normal life keeps these fears alive and well.

One morning on this trip we met with Defense for Children International. They explained that there are 500-700 cases of Palestinian children being convicted in Israeli military courts. Many times, the kids (usually but not always boys) are arrested from their beds at night. Regularly they are beaten on the way. Harshly interrogated. And sign confessions written in a language which they can’t read in order to get out sooner. Rarely can they see their parents or actually meet with a lawyer to know their rights. Because of this work of documentation and exposure DCI is declared an enemy and traitor of the state of Israel because it highlights these abuses. Many Christians in the US would harshly criticize me for repeating these things—claiming that the Old Testament commands me to “Bless Israel.” However, as noted earlier, criticism is not the opposite of blessing. Criticism may be part of blessing.