It was an eerily turbulent flight into storms in Denver, but the YP-double-T landed safely and were happy to begin our week of work and fun at Camp Colorado. We were immediately enchanted by the rustic beauty of the camp and warmed by the welcomes of camp staff. (Unfortunately, their kind words didn’t do much to keep our toes warm at night – but their gracious gift of blankets did!).

The week promised to be a change of pace, as we were going to be working with junior high campers and giving our five planned sessions their first go. But, after a week full of hiking to new heights, diving head-first into emotional depths, and taking a closer look at the gospel of peace, we can confidently report that this week made a difference. 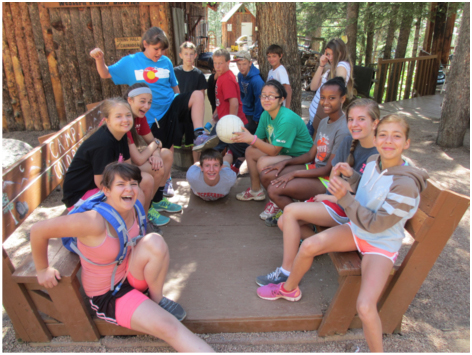 While we could immediately feel the breath-taking and lip-chapping effects of being 7500 feet above sea level, the true mountaintop experiences of the week revealed themselves more slowly. Some of us soared as our small group meetings invited and facilitated conversations surrounding the role of Jesus in our lives and His awesome healing powers. Some of us thrived when we went down to the river to play. And it’s safe to say that everyone, including the neighbors’ “polar bears” (giant flufftastic white dogs), smiled their way to the top of Russell’s Ridge, a beautiful hike and camp tradition. We were on top of the world as our staff and students displayed their creativity and goofiness during Thursday night’s talent show, as the gifted Jerry Bowen led us in meaningful and relevant spiritual exercises, as we were treated to musical and comedic performances as campers (and your very own YPTT) received mail, and as we gathered each morning in the warm sunshine and each evening around the blazing fire to pray together.

As previously mentioned, this week was our first opportunity to teach the lessons we hope to teach many more times throughout the summer: Biblical foundations of peacemaking, bullying education, just peace, care for creation, and interpersonal conflict resolution. It took some late nights of planning and on-the-fly adjustments, but the interest and interaction of the campers energized us and reassured our excitement for the important work we are doing this summer. Highlights included our small group discussions about social justice issues and how to start tackling them together, an interactive game that encouraged passion and community organizing against a destructive corporation, and an uplifting affirmation activity to wrap up the week. We anticipate continuing to give our whole selves to this great teaching task as the weeks wear on, for the rewards are life-giving and fill up our cups.

Although parts of the week were intentionally planned to allow both campers and staff to recall and wrestle with deep pain and sorrow in our lives, the healing of Christ and the support of the camp community trump the burdens we face and the bruises we endure. We have been climbing the mountain and have lost our breath a few times along the way, but we have new relationships and new perspectives to guide us for the rest of the journey. We are immensely thankful to have had another week of growth, learning, hospitality, and PEACE!

Mountaintop experiences occurred frequently for me at Camp Colorado; the primary reason for this was the impact of God’s majestic creation, which always seems to touch me in the core of my being. The first experience of this was going to the river some miles away from the camp. Jamming out on the way through the mountains, then wading into the refreshing, chilly river stimulated my senses. Getting to know a new friend, hearing about their life in the middle of the beautiful rushing water, the background sounds of campers playing & splashing, surrounded by massive mountains with protruding boulders combined to make a stellar experience. Another night, Shelley & I slept under the stars, listening to Bon Iver & Jonsi as well as the forest sounds around us. I counted fifteen shooting stars before drifting to sleep. After hiking to Russell’s Ridge with the entire camp, I decided to run to the top by myself. Reaching the peak, exhausted & joyous, I sat on the rocks staring out over the mountainous expanse watching the sun melt over the trees. Amidst these exclusive encounters with God’s glorious nature, the underlying importance of it all was the connection felt by each member of the camp community. We bonded together over hikes, swims, & just simply looking around us. In our Care for Creation session, we agreed that Camp Colorado was a sacred space for us all thus deserving our ultimate care. What special mountaintop experiences to be had on the Camp Colorado mountaintop! 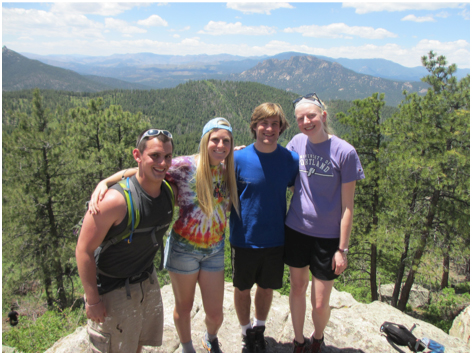 There were many mountaintop experiences while at Camp Colorado, some literally occurring while atop a mountain. The first I would classify as a not a single mountaintop, but a continuing experience. I would awake every morning and workout while at Camp Colorado. Upon finishing my post-workout shower, usually before many other people had woken up, I would go to the lodge and make a fire. These fires were a place where I often talked with the camp nurse Robert. Robert and I bonded while talking by these fires and became friends. Our friendship grew a bit though one night, once again involving fire. After a bit of rain had passed earlier that day I was asked to build the campfire for that night. After being unsuccessful for a while, who should show up but Robert. The two of us then proceeded to build a fire, despite all laws of fire building being noncompliant (dry pine needles, cardboard, and paper all not wanting to light for more than a split second). It was upon the creation of this particularly difficult fire that I can say that I really felt I was atop a mountain. We had earned that fire, a fire that we were able to share with an amazing group of junior high campers. The second experience I’d like to share is one that literally occurred while at the top of a mountain. While sitting on the mountaintop talking with one of the counselors, and accompanied by a dog-named BJ, I soaked in God’s beauty in many ways. The beauty of the view we had atop Russell’s Ridge, the beauty in the simplicity of the nature around me, the beauty in the meaningful conversation two people can share, and the beauty in the ways God guides our lives, even in ways that we don’t fully understand. 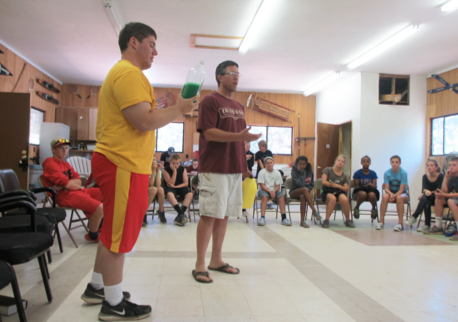 Camp Colorado overflowed with compassion, heart, and care for others. The staff’s passion for the sacred space of Camp Colorado was transparent in all their actions. During our last session this atmosphere of warmth was palpable. The Youth Peace Travel Team led the last hour-long session on Friday that taught about Interpersonal Conflict and how “I Feel” statements can be used to diffuse a situation. At the end of the session I led an activity that spoke to the caring and love we had found amongst the junior high campers of Camp Colorado. I have been a participant of this activity before, and I thought it would be fitting to include in our curriculum. The activity, named “Taps”, does not offer up a lesson, but rather conveys the power of others and their compliments. All involved are asked to sit in a circle facing outward with their eyes closed in a peaceful and relaxed mood. The group is then numbered off into three to five groups depending upon size. One group is called in to the middle of the circle and asked to tap those in the activity who they embody the statement read to them. I stood in the middle reading statements: “Tap someone you have laughed with,” “Tap someone who is powerful,” “Tap someone who helped you heal,” “Tap someone who surprised you.” After each statement is read the people involved are given a minute or so to tap someone. I was surprised by the whole camp and the willingness of the campers to engage in an activity as giving as this one. Campers and staffers blew me away with their compassion for one another. They all had truly bonded over this one week of camp. Some members of the circle cried and some smiled but they all enjoyed the positive energy that was suspended about the room. And I believe it is created not by the activity, but the people involved, the power of that intimate silence shared by ones who love each other. I am grateful for the chance to be at Camp Colorado and to share this moment with such beautiful people. The best part about Taps is that it doesn’t matter who taps you, you are amazing, awesome, bold, original and unique regardless, the compliment is still the same.