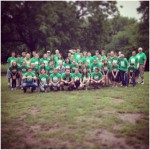 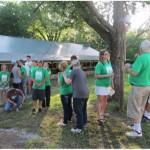 Greetings, wonderful supporters of the Youth Peace Travel Team! This is Shelley speaking, and I’d like to take a moment to orient you in how we plan to blog our adventures throughout the summer. Each week, one team member will write an overarching summary of our time and leadership at each camp or conference, followed by more personal reflections from the remaining three members. This week, I have the honor of documenting a summary of our time at our first camp of the summer, Camp Mt. Hermon!

Moments – goofy moments spent interacting with senior high campers and fellow Camp Mt. Hermon staff, heartbreaking moments spent witnessing the struggles facing our youth and listening to their burdens, victorious moments in Ultimate Frisbee and Capture the Flag games. The 2014 Youth Peace Travel Team’s time at our first camp of the summer can be summed up by the joy and sorrow found in these precious moments.

We were first greeted by thousands of sandy-colored butterflies as we rolled down the rocky drive on Sunday afternoon, and next greeted by enthusiastic parents, campers, and staff at YPTT’s own Jake Frye’s home camp. It wasn’t long before the inevitable and all-uniting Frisbee discs were brought out to help us learn names and personalities, and not much longer until the bell, the central time-keeping device of camp, was rung. Throughout the week, it was the rustic metal bell that alerted us when it was time to come together to sing praises, break bread, swim ecstatically (cough cough Chris), gather around the campfire, and when to whisper our last prayers and fall asleep at the end of each life-giving day.

Jen Jensen, our director for the week, said it best when she proclaimed that at Camp Mt. Hermon, “we work hard, we play hard, and we worship hard”. We worked purposefully during daily chores, service projects at camp and church, and while serving lunch at a soup kitchen in Kansas City (a special Camp Mt. Hermon tradition). We played cooperatively during Camp Mt. Hermon Olympics, late-night glow-in-the-dark Ultimate Frisbee, and old-school tetherball before mealtimes. We worshipped wholeheartedly each night around the campfire, where campers had opportunities to illustrate both the burdens of daily life at home and the hope brought by camp and the power of God. The pinnacle of our worship occurred on Friday night when the feet of campers, counselors, friends, enemies, brothers and sisters, and once-strangers were washed all the same (for 2.5 emotional hours!). It was the bell that kept us in a daily rhythm, but the real human moments in between that make camp life and our work so special.

The leadership of YP-double-T at Camp Mt. Hermon was used primarily to lead campers in “hot topics” discussions, where we facilitated open and candid discussions about anything from war to drugs and alcohol. We experienced moments of honesty from campers who felt safe in sharing their opinions, moments of unity as youth discovered that they could respect the differing views of their peers, and moments of silence as we were called to deeply reflect upon current events through a Christ-centered lens. We also asked campers to help us in starting a big summer project – a traveling mural focused around their visions for peace. They blew us out of the water with their creativity and diligent work in illustrating Camp Mt. Hermon’s visions.

As we leave Camp Mt. Hermon with full hearts, we feel honored to have been welcomed into such an uplifting community and participated in its traditions and pastimes. We are thankful for the moments we shared connecting with campers, laughing with staff, continually getting to know each other, and serving our Lord. While the old reliable camp bell was anything but quiet, we are at peace with the Spirit-filled moments that we were blessed with each day at Camp Mt. Hermon. 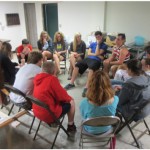 Shelley summed up daily, wonderful life at Camp Mt. Hermon, but no blog could contain all of the meaningful memories made this past week. One of the most significant ones for me came in the form of the homeless men and women that we met in the soup kitchen whom we served on Thursday afternoon. We sat and spoke with them while we all ate and discussed life. A man I conversed with over lunch was really open with me about his struggles with alcoholism and we were able to have an honest conversation that impacted us both. In the end, he left saying, “I hope all of your dreams come true, Christy” and I told him I would keep him and his family in my prayers. Moments like that are unforgettable. Another significant time for me was the concert played by my brother Jacob Crouse and friend Mat Thorton! From covers of “Let It Go” from Frozen, “Happy” by Pharell, and “One Day” by Matisyahu to their originally written and composed worship music, the concert got our hands a’clappin’ and our feet a’tappin’. I even got to sing on a couple songs with them, which felt amazing. Nothing can beat worshipping the Lord alongside both camp family and family family :). The music engaged us all and it meant a ton to every one of us for them to share their time and talent with the Camp Mt. Hermon community! 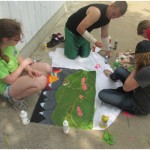 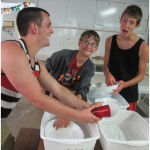 I attended Camp Mt. Hermon every summer from 2003-2012, including two years of counseling junior high youth in 2011 and 2012. During those two years of counseling that I met a great group of kids that I had the joy of returning to this summer. When I left that group in 2012, I viewed them as kids. Upon my return this summer I was greeted not by the kids I had left, but by young men and women with love and compassion for this community that lifts my soul. This love was most exemplified in our Friday night foot washing service. As a young Brethren man I have been a part of numerous foot washing services. But, none of them compare to the beauty of this service. For two and a half hours I watched young men and women wash each others’ feet. As tradition, four counselors volunteered to wash the feet of the campers, one of those privileged being me this year. It was incredibly humbling for me to be a servant for this amazing group of young people. The foot washing didn’t end with us counselors washing the feet of our campers, the campers then proceeded to wash the feet of their peers. Brothers and sisters, both in faith and in blood, serving each other in breathtaking acts of love. The community at Camp Mt. Hermon has always been its strongest attribute. This attribute is so much more beautiful and meaningful when you’re working behind the scenes though. The spiritual and emotional growth I’ve witnessed in these campers restores my faith the future of the church. Remembering their inability to sit still for a short camp fire just three years ago and surpassing it with this wonderful new memory of humility, love, and service. As I become part of the community which helps build Camp Mt. Hermon, I look at these young people and am assured that this community is one molded by God and bound together in a love that must be experienced in order to understand. 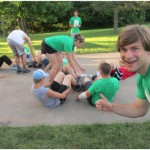 At Camp Mt. Hermon we were called upon to lead a campfire on Wednesday night. The theme for that night was “Jesus as Teacher.” As we walked around the campfire leading songs, old and new, I was struck with awe at our energy. We were alive, we were singing the songs as loud as possible and the campers responded with their own vivacious cheer. We were together. The moment felt as if we had arrived, the beginning of a coming into being of what it really meant to be a member of the YPTT. I was impressed with our ability to draw in the campers and allow the energy to move through all of them.

As the campfire continued, Christy shared scripture and spoke more on how balancing one’s faith takes effort when we have the distractions of daily life set before us. Then I told a story about an incident with my brother that showed me what true grace was, and how Jesus had taught me through that moment. Jake described his life journey and how he struggled with his own foundation in life. He emphasized that Jesus teaches the importance of a strong foundation and challenged each camper to find their own stable base to rely on in times of uncertainty. Shelley ended the campfire with Peace Pilgrim’s Prayer.

It was a beautiful service and we really connected with the people of Camp Mt. Hermon. I felt caressed by the warmth and welcoming of Camp Mount Hermon, and the refreshing joy of starting such an exciting journey with three amazing people. I feel blessed.

What a week it was at Camp Mount Hermon. There are so many things to let ya’ll know about this amazing camp from the fantastic campfires to the wonderful games, and not to mention the awesome teens and counselors. God sure has made His presence known throughout that camp!

Although I want to tell you all the stories from this week of camp, one of my favorites is about pool time. Every day, we drove to the public pool in Tonganoxie, where it was packed. We made a big circle where we talked and hung out, and we came up with a sort of cheer. We would be really loud and yell “WE’RE IN A POOL IN KANSAS!” while we were shaking our arms rapidly in the air! If you haven’t tried this, you should; it’s very freeing!

Camp Mount Hermon was a wonderful start to what I feel is going to be a God-filled and fun-filled summer! Blessings till next time!