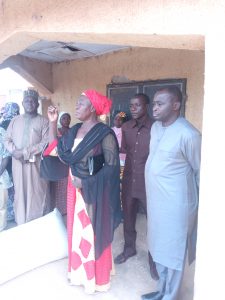 Markus and others bring greetings and food

Gurku Interfaith community lies on the outskirts of Abuja, the capital of Nigeria. Muslims and Christians live and work side by side. They are Internally Displaced Persons (IDP’s) who are from the Madagali and Gwoza areas of Northeast Nigeria, the area most affected by the Boko Haram Insurgency.

In December and January, news of various attacks reached the Gurku community. Since communication to this remote area is so difficult, the community decided to send volunteers to find out first hand what had been happening. Here is what they found:  Nine villages had been attacked, 17 people killed, 39 homes burned, 28 businesses destroyed, and five villages had suffered looting of personal belongings and food supplies. With this devastating report, a committee was formed to plan a relief effort to the area. The committee included elders and youths from both faiths. Nigeria Crisis Funds were able to provide $7,500 for the project. 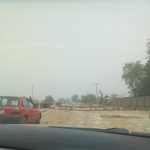 Check points along the way

How do you get help to areas where it is almost impossible to travel? How do you let the remote areas know that help is coming? Who will be willing to travel to the area to take the relief? How do we get help to the most vulnerable? The committee dealt with all these logistical questions. Three zones were designated to get the relief. The recipients of the relief were chosen from among the neediest. It was determined that 74 families who had lost loves ones would be given cash support. 116 bags of corn would be divided among 580 families. The corn was purchased from nearby markets. Two vehicles and local hunters were engaged to transport the corn. Help was secured from military and security personnel.

After all the preparation, it was time to actually enter this highly unstable area and get the food and money to the people. Markus Gamache, one of the founders of the Gurku Interfaith community, was invited to participate and take the relief to the three zones of Shuwa, Gulak, and Madagali.

Here are some of his reflections from the trip: 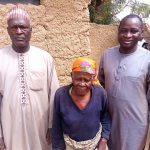 “I was given one Hilux truck full of hunters and we went speeding into those areas. We could only stop for ten to twenty minutes to deliver the goods and encourage the people. We sped through villages that were dried up and in ruins with only a few people in the entire place. When we finally reached Madagali, where I had not been since May 2014, the only cars or motor bikes I saw belonged to security agents. I thank God I was even able to see my mother who is now living in Madagali. The entire trip was tension filled; there were four checkpoints where we had to get out and walk for some ways before getting back in the vehicle. As we drove through the villages, I saw people waving to me with big smiles on their faces, but this brought tears to my weak heart. These are my people and they are not free. How can I live comfortably in my home when so many are suffering?”

Corn ready to be distributed

This project was only obtainable by the huge effort of the committee from Gurku, Markus Gamache, and countless other volunteers along the way. To receive the aid, people had to travel quite a distance to reach one of the three distribution points. Plans were also made in each zone to cover transportation of some of the corn to remote areas that were not accessible. In all, 658 families were assisted. The families who received cash got about $30 each and they were very grateful. They said the cash would sustain them for months by helping purchase food, provide travel to fleeing families or pay for medical services. The families who received corn were also extremely thankful. Some of these families had not eaten for three or four days due to recent attacks.

Thank you to everyone for their continued support of Nigeria Crisis Response! Without your help, this special distribution would not have been possible.