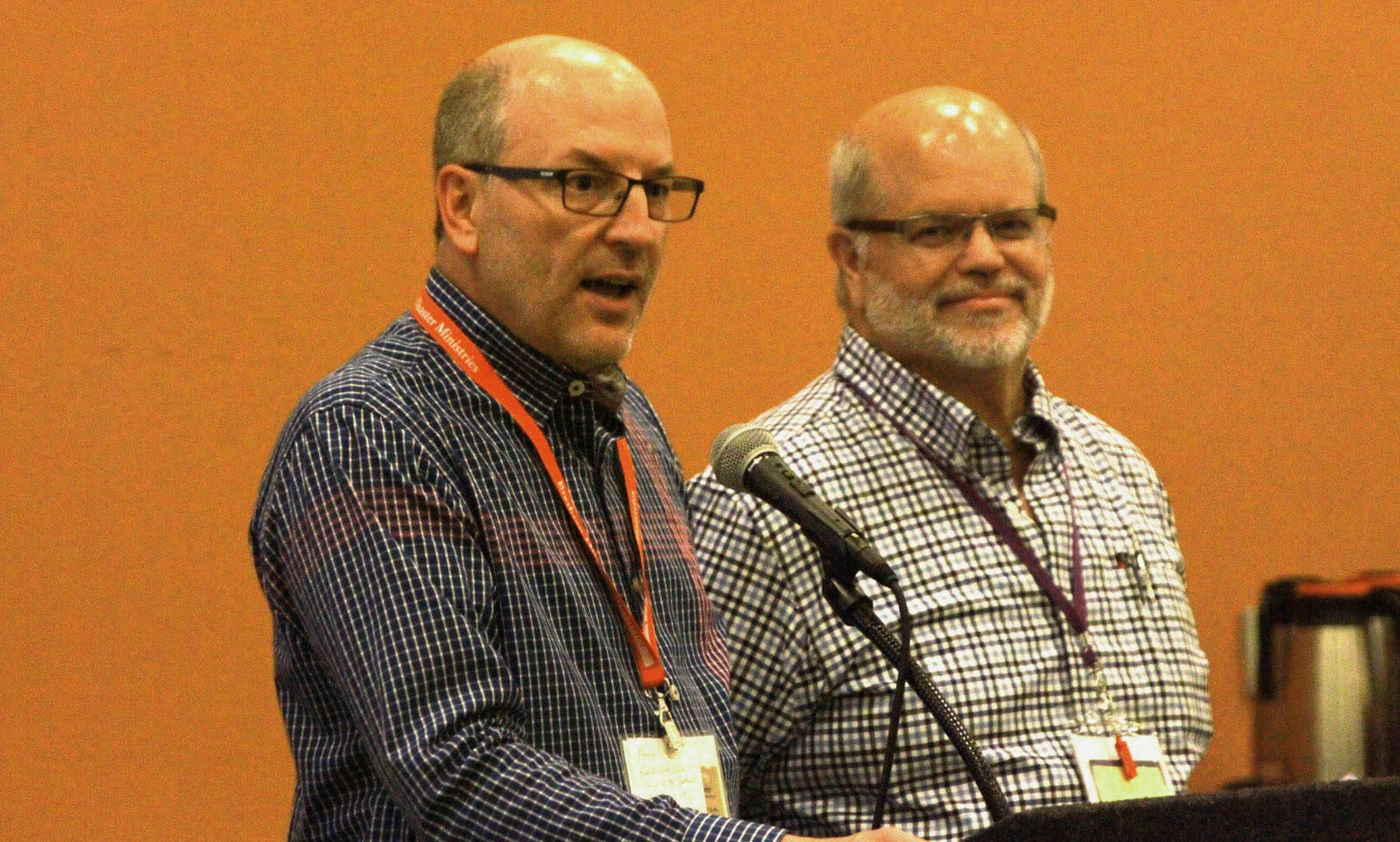 Dan McFadden being honored by Roy Winter at the 2018
Brethren Volunteer Service luncheon at Annual Conference.
Photo by Regina Holmes

My BVS colleagues laugh at me when we start talking about BVS themes. Any time we are looking for a theme about how BVS has impacted your life, what is important about BVS, or an anniversary year, I seem to come back to the 50th anniversary theme, “Living the Story.” The staff say, “Not again, Dan! We have beaten that theme into the ground!” And yet it keeps working for me.

This is now the 70th year of BVS. How does one summarize a program that has influenced so many lives? All the time, people tell me how BVS has made an impact on their lives. “ My BVS years were some of the best years of my life,” they say. Here’s one of those stories: In 1956, Nancy Schall Hildebrandt and Carol Stephens Scott lived for a year on top of a mountain near Kingsport, Tenn., serving a small rural church in some of the most rustic conditions in which BVSers have served. They had no running water and made an indoor latrine. They rode horses to get around. They were two young women on their own in the hills of Appalachia. I wonder if any parents today would let BVS send their children into a setting like that. But Nancy says that year was very formative in her life. What is it about hardship and struggle that makes an experience like BVS so formative?

Not everyone’s year of service is hard. But in most cases the setting is unfamiliar and the culture is new (after all, any placement site is a new culture for the volunteer). The volunteer must develop connections and friendships just to survive. Those experiences of growth can influence a whole lifetime of living. The saying is true: BVS does “ruin” you for life.

My own BVS story started in the fall of 1981. Orientation for Unit 152 was held at the now closed Camp Woodbrook, in Mid-Atlantic District. There were 33 of us. We received 50¢ for breakfast, 75¢ for lunch, and $1 for dinner per person, per day, to buy the food for our meals. (That amount has gone up only 75¢ in 36 years). I was pre-assigned to serve in Honduras with Salvadoran refugees fleeing the war across the border. Looking back from my current chair as director, I wonder if that was wise. My Spanish wasn’t good enough. Steve Newcomer and I were sent to what was, for all practical purposes, a war zone.

Through no fault of the BVS staff, the receiving agency didn’t know who we were when we arrived. We had little support, and it was a difficult assignment. Perhaps the staff at the time wondered if they had made a mistake sending me there. And yet, I wouldn’t trade it for a different experience.

Since then? I came back to BVS as the director in late 1995. When I’m done, I will have served for 22 years and 11 months. I met my wife in BVS. Two of our children served in BVS and now live where they served. Our third entered BVS this summer. Do I have a passion for BVS? Absolutely! I recruit all the time. I buttonhole young adults while waiting to board a plane anywhere in the world. I’m expecting one of those recruits to show up any day now! Living the story? Those words still work for me.