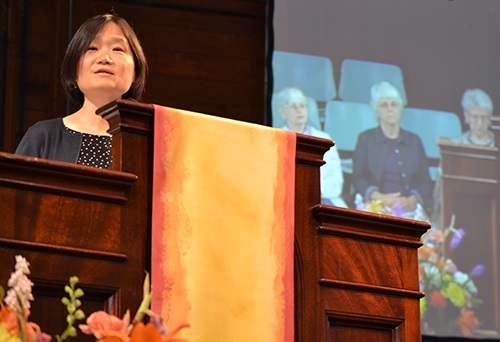 The other day, Esther, a faithful supporter of the denomination, called to say how much she liked the April issue of Messenger. A call like that is always a pleasure, but in this phone call I also learned two fun facts: 1) Esther was turning 100, and 2) she has a life subscription to Messenger magazine.

From the business side, life subscriptions were a short-sighted decision, and it’s no surprise that the offer didn’t last long. But I love encountering the folks who bought them so many years ago. They represent a long-term commitment not just to Messenger, but to the Church of the Brethren. When the communication staff prepare each issue of the magazine, we are heartened by feedback from readers like Esther.

While Messenger magazine is just about the oldest communication medium in our church, it’s not the only one. In fact, in recent years there’s been an explosion of ways to communicate with each other—print newsletters, electronic newsletters, emails by interest group, websites, blog posts, social media, video, podcasts, webinars, exhibits. Nobody sees everything, but everybody can see something. In a church with a wide range of ages and interests, it’s necessary to communicate through as many channels as we can.

Even though life subscriptions no longer exist for Messenger, faithful supporters like you have life subscriptions to the great work we do together. When you give to the Church of the Brethren, you help publish good news. When you subscribe to Messenger, newsletters, or any of our emails, you share in bearing witness to the work of God among us. Together we “proclaim the good news” (Matthew 10:7, NRSV).

Will you give to the Church of the Brethren today?
www.brethren.org/give