‘The land, moreover, shall not be sold permanently, for the land is Mine; for you are but aliens and sojourners with Me.’  —Leviticus 25:23 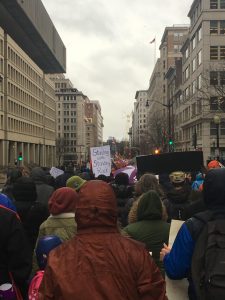 Indigenous people and allies braved the sleet and 30 degree weather in Washington, D.C. on Friday, March 10th  to once again take a stand for Standing Rock. Years of work by water protectors was written away with the swipe of a pen on January 24th, when an order was presented to begin construction of the Dakota accesses pipeline, a 1,100-mile oil pipeline and Keystone XL pipeline through Indigenous land.

This recent order is not a new revelation; it’s another brick in the long, winding path through history of continued oppression of indigenous people. The Doctrine of Discovery, a thinly-veiled excuse to strip indigenous people of rights in the name of American entitlement, was written into US law in 1823. “Christian European nations” had assumed “ultimate dominion” over the lands of America during the Age of Discovery, and that – upon “discovery” – the Indians had lost “their rights to complete sovereignty, as independent nations,” and only retained a right of “occupancy” in their lands. [Johnson:574; Wheaton:270-1] This doctrine continues to linger within our court system as a way to dismiss minority claims. 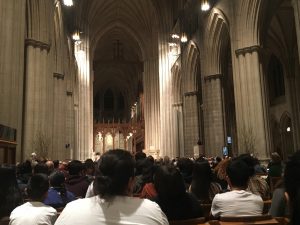 The 1994 Brethren Annual Conference Statement “A Tribe of Many Feathers” addresses the genocidal history of the founding of the United States saying, “The arrival of Europeans was experienced by Native Americans as nothing less than an invasion. This invasion was not just of the land; it was an assault on the humanity of the native people and their holistic way of living. Europeans tended to regard anyone different from themselves as inferior subjects to be conquered and destroyed.” This history founded on oppression gives little room for change.

The annual conference statement not only addresses past wrongdoings but also the injustices subjecting Native Americans to acute mistreatment. “Reasons for distrust have continued into the present day. For instance, in many areas the reservations onto which native people were “relocated” (usually the least desirable, least livable land available) have been found to be rich in minerals and other resources. Federal and state governments now attempt to regain ownership of this land. “ This 1994 statement still hold true as construction of oil pipelines begin through this land.

We’ve seen the horrific images of pepper spray and rubber bullets pounding the water protectors as they peacefully stand for one basic necessity–clean water. I am repeatedly shocked and saddened by first-person accounts of the actions taken by our government to enforce the construction of the pipeline and other forms of marginalization to indigenous people. Sadly, the tragedies at Standing Rock are not the only way that oppression is occurring in America today. Studies of Native American and Alaskan Native populations have shown that these groups are disproportionately affected by food insecurity–limited or uncertain availability of nutritionally adequate and safe foods, which leads to chronic health issues like diabetes, obesity, and heart disease.

This year’s Christian Citizenship Seminar will host the theme “Native American Rights: Food Security.” From April 22nd through the 27th, a group of youth will spend time together in New York City and Washington D.C. exploring this topic and standing against the cruelty of recurring history. If you also share my distress as a Christian about the injustice of Standing Rock and other marginalizations of indigenous people, please take action. There’s still time for youth to register for this year’s CCS, so please help spread the word. Share your own personal experiences with social justice issues. Encourage youth from your congregation to attend CCS. Consider sponsoring a youth if you have the resources to do so. And, most importantly, pray. Pray for those who are organizing CCS that they will bring light to the darkness of this issue. Pray for CCS attendees that they discern ways they can share what they’ve learned about how to make a difference in their communities.