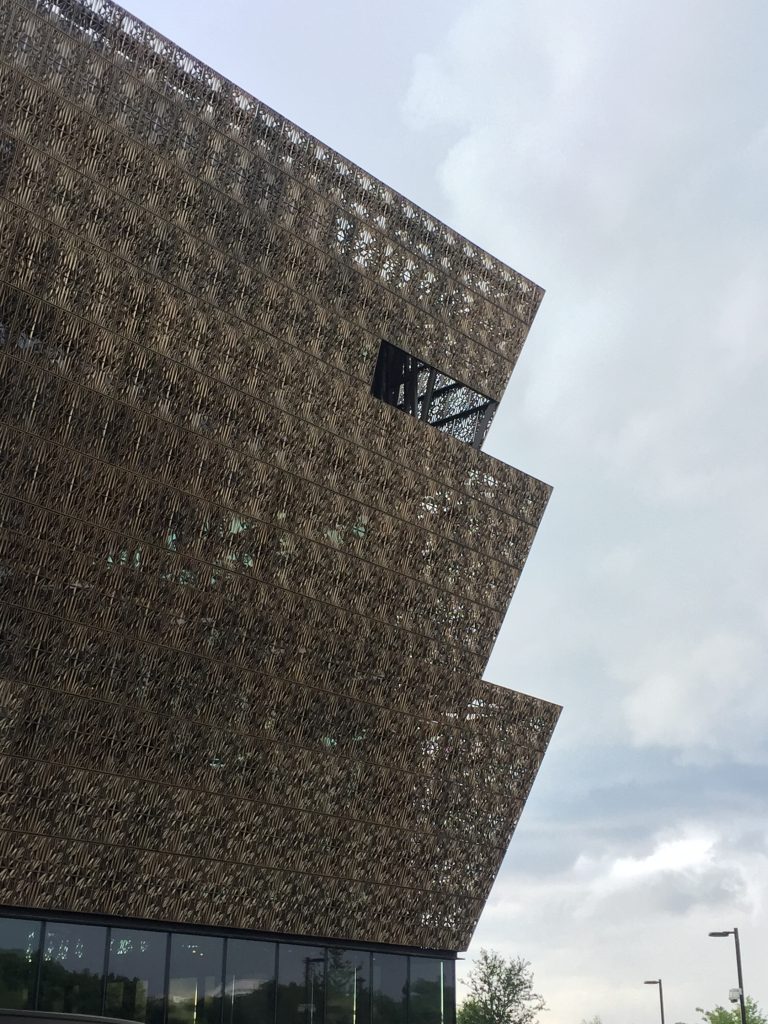 The National Museum of African American History and Culture in Washington, D.C.

“God’s time is always near.
He gave me my strength,
and He set the North star in the heavens;
He meant I should be free.”
—Harriet Tubman, 1859

The path through the museum really begins outside, waiting in line with hopeful tourists and Washington, D.C., residents in the heat and humidity to receive midday tickets into the newest Smithsonian: the National Museum of African American History and Culture. Its grand opening was back in September of 2016 and yet it’s still flooded with people. Inside, another line into the exhibition itself greets attendees—a testament to how many people surge into the museum on a daily basis. 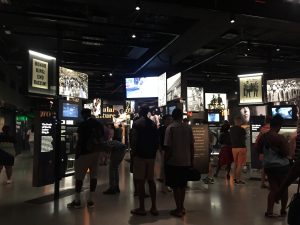 The museum features more contemporary cultural figures and movements as well as important parts of history.

The exhibition begins underground, solemnly reflecting the beginnings of many slaves’ journeys in the bowels of a slave ship. The hallway is dark and lit only by the lights of the text and artifacts’ spotlights. Museum-goers wind their way through history, from the roots of African and European trade and the formation of the concept of race, through the American Revolution and slave revolts, and into the Civil Rights Movement and beyond, recognizing contemporary cultural figures and topics.

“This trade,
so beneficial to the Adventurers,
and important to the State;
a Trade sanctioned by the Clergy,
supported by the Judges,
and authorized by the laws.”
—Robert Norris, 1788

There’s more text and information than anyone could read in a reasonable amount of time, but everyone is trying to absorb as much as possible, surrounded by stories of prominent black Americans both remembered and forgotten:

The story of Belinda, an enslaved woman who petitioned the Massachusetts legislature in 1783 for her freedom, one of the first records of reparations from enslavement.

A sack given from mother Rose to daughter Ashley before she was sold away, pecans and a lock of hair placed inside, passed along with the promise that it was filled with love.

The Point of Pines Cabin, which stood in South Carolina from 1853 to 2013—a shelter, a home, a gathering place. The cabin still didn’t protect slaves from the assault of the slaveowners. 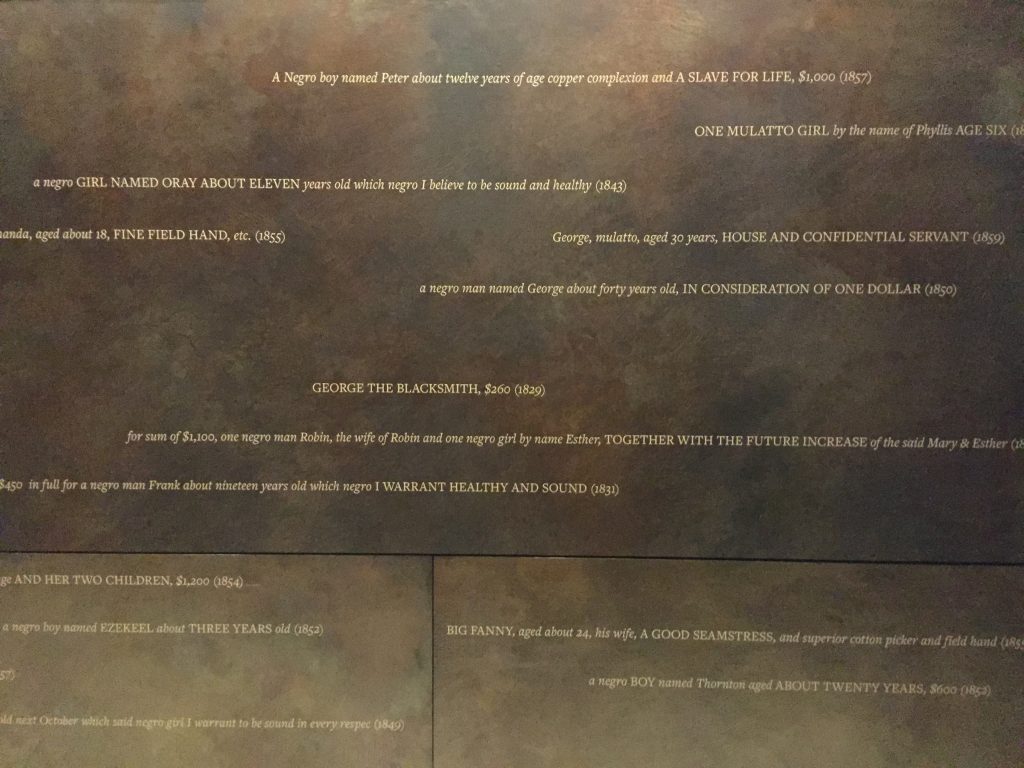 One wall in the museum is covered in the text of newspaper advertisements for slaves.

One wall features a few photos and artifacts from slave markets and, if you look closely, you can see the text of advertisements for slaves—countless names—covering the wall.

Processing this history reminds us what injustice and cruelty has looked like in the past and helps us to understand what it looks like today. This is the history that makes up our country’s roots, and untangling them takes specific and careful work—work that was begun by hundreds of thousands of black Americans long before the museum was built.

“We need the storm,
the whirlwind, and the earthquake …
the hypocrisy of the nation must be exposed;
and its crimes … denounced.”
—Frederick Douglass, 1852

So where have Brethren stood amid these issues? What did it mean to be Brethren in this time of turmoil and cruelty in our country?

The Brethren Encyclopedia entry on slavery details that “Annual Meeting denied the legitimacy of owning slaves and insisted that any Brethren holding them must be set free in order to be a member in good standing (1797-1865). […] During the Civil War, Annual Meeting decisions dealt firmly with any minister who defended slavery. In response to the obvious problem of emancipating slaves in a slave state, Annual Meeting in 1854 reiterated that ‘under no circumstance can slavery be admitted into the church.’”

On a national level, the Brethren took a clear stance against slavery, but issues with individual members regarding slaves arose. According to 1962 Sidelights on Brethren History article:

“In the Valley there were some members of the Brethren Church who, though not owning slaves, thought that it was permissible to hire them from those who did own them. Yet from the earliest date the most of the Brethren stood uncompromisingly in opposition to this traffic in human lives in whatever form it took. The Roanoke Annual Conference said in answer to the above-mentioned query that ‘it would be best for a follower of Jesus Christ to have nothing at all to do with slavery.'”

This certainly wasn’t the only instance like this in the church, and the Brethren at Annual Meeting and at regional conferences addressed a number of problems with church members in regards to slavery at the time of the Civil War. The article goes on to say:

“In spite of all that was done by Annual Conference and by council meetings, the matter continued to disturb the Brethren as late as 1863, when a query came to the Annual Conference held in the Clover Creek church in Blair County, Pennsylvania. […] After prayerful consideration the following decision was given: “In as much as the Brethren always believed, and believe yet, that slavery is a great evil, and contrary to the doctrine of Christ, we consider it utterly wrong for a brother to justify slavery either in public or in private, and that he should be admonished, and if obstinate, shall be dealt with according to Matt. 18. […]  Slavery was ended nearly a hundred years ago, by means which the Brethren could neither approve nor support. During the intervening century the Negro has demonstrated to the world – with outstanding proof such as Booker T. Washington, George Washington Carver, Martin Luther King, and Ralph Bunche – his basic equality with the white man. On their part, the Brethren still have a largely unused opportunity to show the colored people of the nation that their concern for them is one of deep-rooted, genuine brotherly love and goodwill.”

“We do not wish to make you angry,
but … consider how hateful slavery is
in the sight of God.”
—Absalom Jones and Richard Allen, 1794

What does this history mean for us now? Clearly, the conversation around race and blackness has changed quite a bit since slavery, and even since the Civil Rights movement. We cannot fall back on our historical opposition to slavery and assume that carries us into current day. Our job as the church to call out injustice looks different now, and these issues are many-layered and complex. 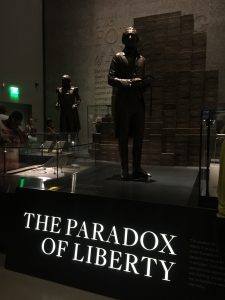 After making their way through the narrow halls about the foundations of slavery, visitors spill out into a room telling the stories of black people during the American Revolution.

As one plaque in the museum reads, “The paradox of the American Revolution—the fight for liberty in an era of widespread slavery—is embedded in the foundations of the United States. The tension between slavery and freedom—who belongs and who is excluded—resonates through the nation’s history and spurs the American people to wrestle constantly with building ‘a more perfect Union.’ This paradox was embedded in national institutions that are still vital today.” We must take a hard look at our institutions, especially the church, if we seek to bring God’s justice to our world.

The 1991 Annual Conference Report on Brethren and Black Americans states:

“Because racism is built into our way of life, it is extremely difficult to unmask it and honestly face the radical changes that need to be made in ourselves and our institutions if it is to be eradicated. Members of the Church of the Brethren face the subtle temptation of thinking that because there are not many black Americans in the denomination, or because many of us do not live in physical proximity to black people, that the problem of racism is not our concern. Nothing could be further from the truth. Many of us benefit from racist practices, without being direct participants, because of decisions and policies already in place in our religious, economic, and political institutions.”

Despite the 26-year gap since this report, this statement still rings true. It still challenges us to recognize our prejudices and demand justice in an unjust society—a society wrought with the mass incarceration of black and Hispanic people; a society in which urban areas hard-hit by poverty are largely minority communities; a society with a resurgence in the visibility of white supremacy and hate groups.

The first step is simply listening to people of color talk about their experiences, without feeling the need to argue or counter their stories. Experiences cannot be false.

However, listening and empathizing aren’t enough. The second step is moving to immediate action, especially in response to violent racist attacks and the actions of hate and white supremacist groups.

The reminders of what this dangerous hatred fuels and leads to is not only in our museums and memorials, but now in current news headlines. The National Museum of African American History and Culture should not simply be seen as a home for dusty relics of the past, but as the watchful eyes of history looking at how we respond to the daily infringements on civil rights that occur all around us.

“Though our bodies
differ in color from yours;
yet our souls are similar
in desire for freedom.”
—Vox Africanorum,
Maryland Gazette, 1783 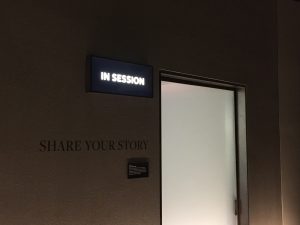 A corner of the museum where visitors are invited to “share their story.”

Here’s an idea from the museum: Tucked off to the side in a couple corridors leading to the next level, rooms stand with the door aglow and an “In Session” sign lit up—it asks passersby to “share your story.”

How can we reach out to people sharing their stories? How can we listen to our brothers and sisters in our churches and in our midst whose words have fallen on deaf ears?

A good place to start is the resources from Intercultural Ministries, the Office of Public Witness, and On Earth Peace’s Racial Justice initiative. But perhaps we need to think through more concrete processes the church can develop to to commit to dismantling racist structures.

When Harriet Tubman said, “God’s time is always near” in 1859, it was a call to action for that day and a resounding vision for the future. We have done good work in the past. It is not enough. We must do better work now in order to bring God’s time to earth.

“Let us all unite, and … declare
that we will not leave our own country …
this is our … country; …our forefathers have
planted trees in America for us
and we intend to stay and eat the fruit.”
—Peter Osborne, 1832

3 thoughts on ““God’s time is always near”: Thoughts from the African American Museum”