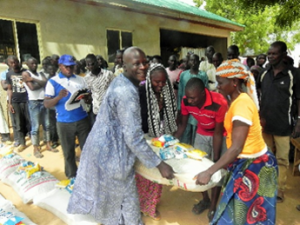 The road from Kwarhi (EYN Headquarters) to Maiduguri is less than 150 miles but it is a treacherous journey. The section from Damboa to Maiduguri  goes through an area close to a Boko Haram stronghold and is only accomplished with a Military escort. Hundreds of vehicles line up with Military at the front, rear and middle hoping to ensure a safe passage. As the EYN disaster ministry traveled this road they witnessed the Boko Haram’s destruction of homes and businesses. The farms on the outskirts of Damboa lie fallow; it continues to be too dangerous to work the fields despite the fact that the survival of most people in the area is dependent on farming.

Upon arrival at Maiduguri, the capital of Borno State, the Disaster Response Ministry held three large food & supplies distributions; helping 577 families. Medical assistance was also provided at the distributions. Recipients of the relief were extremely thankful and many told tragic stories of the death of family members.

Participants in a Trauma workshop

Ester Kashim shared, “I was sick when the Boko Haram caught me and took me away from my home in Gavva. I spent two years and three months with them in the Sambisa forest and in another location around Lake Chad. When a fight occurred between the Boko Haram and some military, I was released and ran away. By this time I was pregnant but got to Maiduguri where I stayed at a military barracks for a month before an uncle found me and took me to his home. My baby has now been born, her name is Rebecca, and I am trying to take my High School exams. Thank you for your assistance!”

Trauma workshops have also been held recently in the Maiduguri area. Testimonies from these workshops confirm the need for this ministry. Maryamu testified after her workshop, “I was angry and hardly forgave before, but now I have learned the importance of forgiveness; hence from now on I will forgive people who hurt me.”

Violence continues in Maiduguri and the surrounding countryside. Attacks have occurred within the city and on the road from Damboa despite the Military escort. We continue to pray for our brothers and sisters in Nigeria.