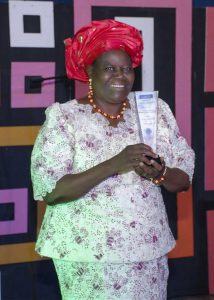 Dr. Rebecca Dali is the founder and executive director of the Non-profit called Center for Caring Empowerment and Peace Initiative (CCEPI). For several years the Church of the Brethren has been providing funds for CCEPI’s work. The last two years we have sponsored three Livelihood Centers in Jos, Yola, and Michika. The students are either widows or orphans (Muslims and Christians) who have no way to support themselves. The attend classes for nine months at the Centers and are trained in computer, sewing, or knitting and taught skills for running a successful business. At the graduation, the students are given a computer, sewing or knitting machine and sent out to start their own businesses. 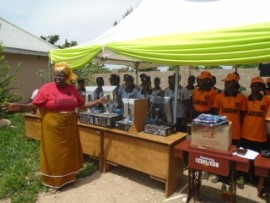 This fall 119 students graduated in joyful ceremonies that included dancing, singing and some tears. In addition to the specific training, all the students learn how to make shampoo, lotion and dish soap that they can use or sell. The students have all been traumatized in one way or another so they form close bonds and are an informal support group. During the nine months at the Livelihood training center, they also have a chance to tell their stories and these are written down.

Here are stories from two participants: 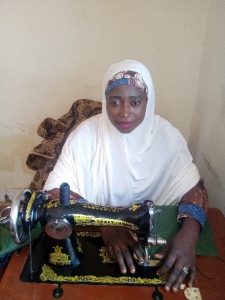 HAJARA – On the 06-08-2012 my husband, Abubakar, of the Nigerian Army Rukuba Cantonment was drafted to Military for peace keeping. He spent almost four years in this exercise. From time to time he would collect a pass which enabled him come and see me and the children.

0n 10-7-2016 in the morning some soldiers came to my block and told me that on 10-6-2016 boko-haram attacked the Military unit in Sambisa Forest and killed Officers/Men and that my husband was among those killed. I just burst into tears and fainted.

His death has left me with five children to look after. His death benefit is yet to be worked out so life has not been easy for me and the children. I am very thankful to have been selected to attend the CCEPI Skills Acquisition Center. 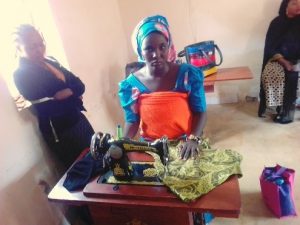 ESTHER – I lived in Gava II with by mother and siblings. On the 5/9/2014 by 9:00am, I was down with fever but I still had to fetch the water and check to see if my corn was ground. On the way from the well to the mill, I heard people shouting “ku gudu, ku gudu” in Hausa, meaning “lets run let’s run”. I started running but due to my ill-health, I could not run fast enough and when I was about to climb up the mountain, the boko haram caught me and brought me to Pulka along with five other women.

After five days under the care of one man called Aliyu, he took us to Gwoza. Here we joined Chibok girls by name Saratu Yahi and Saratu Tabbji who were kidnapped along with their mates in G.S.S Chibok. While in Gwoza, a man named Bana bought me as a slave/wife from Aliyu. I was taken to another village; while there, I got pregnant by the man, Bana.

My owner/husband, Bana, along with other boko haram members went for attack on innocent people. Unfortunately, he was killed by the soldiers. It was then that I began to plan my escape. With the help of God, I was able to follow one small road and then joined a vehicle traveling to Maiduguri. When the soldiers started asking questions during checks on the road, I told them that I had escaped from a boko haram camp. They immediately took me to their barracks in Maiduguri where they interrogated me on how I survived in the Sambisa. They asked me to call my parents to take me home.

Before I was kidnapped I was married to Ubale. When I came out of the Sambisa forest heavily pregnant by boko haram, I came to my husband but he drove me away and said that he was no longer interested in our marriage. When the Director of CCEPI, Dr. Rebecca S. Dali, heard of my case, she gave me a room, food, cooking utensils, mattress, and blanket. Then she enrolled me into her center where I am learning how to sew. I am very grateful to God and Dr. Rebeca S. Dali.