Welcome to a Nigeria Workcamp by Peggy Gish 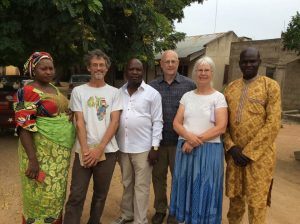 “Aiki! Aik! Aiki!” men called out from time to time, “Work! work! work! (in Hausa). Under a hot sun, a continuous line of men carried cement blocks up a wooden ramp with nailed on rungs, to the second floor of what will be a new office building for the EYN (Church of the Brethren in Nigeria)  staff, at the church headquarters in Kwarhi, in Adamawa State.  On the second floor, groups of men mixed up mortar, and lay block to form the walls and doorways of the new building. 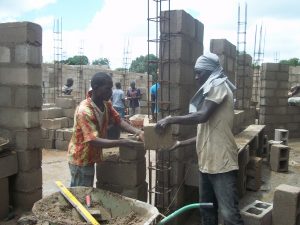 When asked why they came to the workcamp, the men, who left their jobs at home to work here, gave answers such as the following:  “This is a way I can serve God.”  “When people drive by, I want them to see a church whose headquarters show the dedication and support of its people.”  “After Boko Haram’s attempt to destroy the church, we want to rebuild and make it strong.” 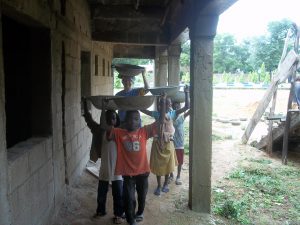 The camaraderie and festive mood of the group attracted a number of boys and girls—children of EYN staff and others living near the compound—who joined in the work. They filled metal dishpans with sand and carrying them up to the second floor to be mixed with concrete.  Two of the older boys proudly found that they could carry on their heads or shoulders half blocks. There would be moments, however, when the children or adults erupted into play.  Suddenly the children would be flying paper airplanes around the site or playing impromptu games.

As the time went on, there were more playful moments among the men—joking around, working to music, or tossing plastic water bags to or at each other that burst. During a break young men spontaneously formed a percussion band and sang together.  Another time the words in Hausa to “Holy, holy, holy” or “Count Your Blessings” could be heard through the building as they worked. 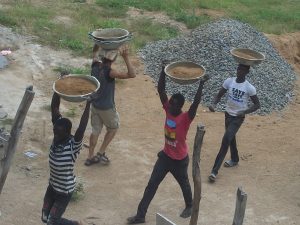 Long after the participants go home, we expect the impact of this workcamp to extend beyond the almost 5,000 cement blocks that had been trucked in and mortared in place. Forged together in these two weeks will be the ongoing friendships across tribes and cultures, and increased dedication to and joy of serving their church.  The work here will not only strengthen EYN as a church, but stand as a symbol of hope—as out of the crisis it rebuilds and is renewed.