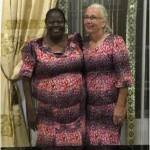 As we shared our Thursday morning breakfast we didn’t know that we would enter into the deep trauma of someone we cared deeply for, Joshua Ishaya. There is a saying by “Daniele Bernock, “Trauma is personal. It does not disappear if it is not validated. When it is ignored or invalidated the silent screams continue internally heard only by the one held captive. When someone enters the pain and hears the screams, healing can begin.”  ― Danielle Bernock, (author of Emerging with Wings: A True Story of Lies, Pain, and the Love That Heals)

Riding in the van to the Favored Sisters Christian Fellowship School, Joshua Ishaya, our EYN Fellowship Tour assistant, told us his story of trauma from recurring threats of attack and unimaginable violence he had experienced. First, the months of threatened attacks leading up to the BH attack on Oct. 29th 2014 at his alma mater, Kulp Bible School, Kwarhi/Mubi in Adamawa state. Joshua ran for his life on foot across rugged terrain, witnessing a friend dead in his car and hearing the gun shot and bombs all around him, arriving barefoot in a small village where help was received. 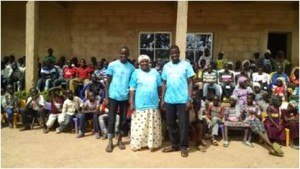 Four months later in Feb 2015, Joshua traveled from Jos to Kano by bus to stay with his sister. The bus arrived in Kano just before 3 pm, but because 3pm is the Muslim prayer time, the bus was not allowed to pass in front of the Kano Central Mosque which holds 5,000 worshipers. Three blasts went off at the Kano Central Mosque in close succession and Joshua saw bodies, body parts, and blood everywhere, as their bus was very near the Mosque. The images of death and destruction are still vivid in his mind 20 months later. The terror of retribution that was directed to Joshua as one of the few Christians in the vicinity of the Mosque was terrifying. For days, Joshua could not eat, sleep, or even write his name. He cried for hours once safe with his sister in Kano.

Four months later, in June 2015, Joshua was asked to help out at FSCF with the traumatized orphans. Their first day together, all the children could do was cry and Joshua also cried with them. On the second day he realized that he had to do something different so he began taking pictures of the children with his cell phone. They were desperate to see their own picture, so Joshua used his laptop to put the pictures into PowerPoint and show the children their pictures. Slowly the crying ended and a few small smiles emerged. Over the next two months Joshua entered the pain of the orphans and heard their silent screams, healing was beginning for many children. 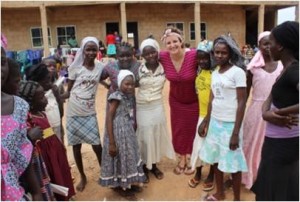 Katie Ulm with the children

One year later, Joshua and our FT visit to FSCF in Aug 2016 –  like a sweet reunion for many of the orphan children as there was great joy at seeing Joshua when we arrived! Our FT Visit to FSCF Orphanage & School started with sweet singing by the orphan children living at the school over the summer break. They sat in plastic chairs and seemed hesitant or unable to smile. Playing games, teaching how to throw a Frisbee, a quick football (soccer) game, painting popsicle sticks, drawing pictures, or just talking with and taking more pictures of John, Eve, Jason, Joy, Rahila, Sarah, Mary, Susan, Israel, Yuku, Vilto, and the many others was the order of the afternoon.  A simple visit that says to an orphan, ”You are important and loved, we came to see you.”,  seemed to bring more healing to the orphans and changed us as we shared in their pain. Before leaving we honored the FSCF Asst. Director and pastor Balla with the teal “We are one body in Christ shirts” for the great love that FSCF is extending in Jesus’ name to these EYN orphans. Pray for the many orphans in NE Nigeria. God is using Joshua’s deep trauma for His glory – Joshua has a calling into Youth Ministry – Praise God! 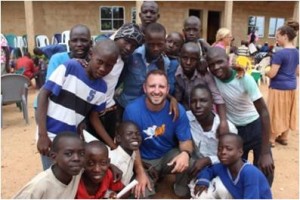 Adam Ulm with the orphans

Take-Away Thought – Trauma is personal. . . . When someone enters the pain and hears the scream,s healing can begin. In a small way, the FT entered into the pain of Joshua and of the children at FSCF orphanage so hope and healing are taking place. We are family, the body of Christ, united in love. When our family suffers, we come together to be present and to love one another. As Zander Willowby  observed in his blog dtd 22 Jul 2016,  “A church is people stuck together by love.” https://blog.brethren.org/2016/a-church-is-people-stuck-together-by-love/